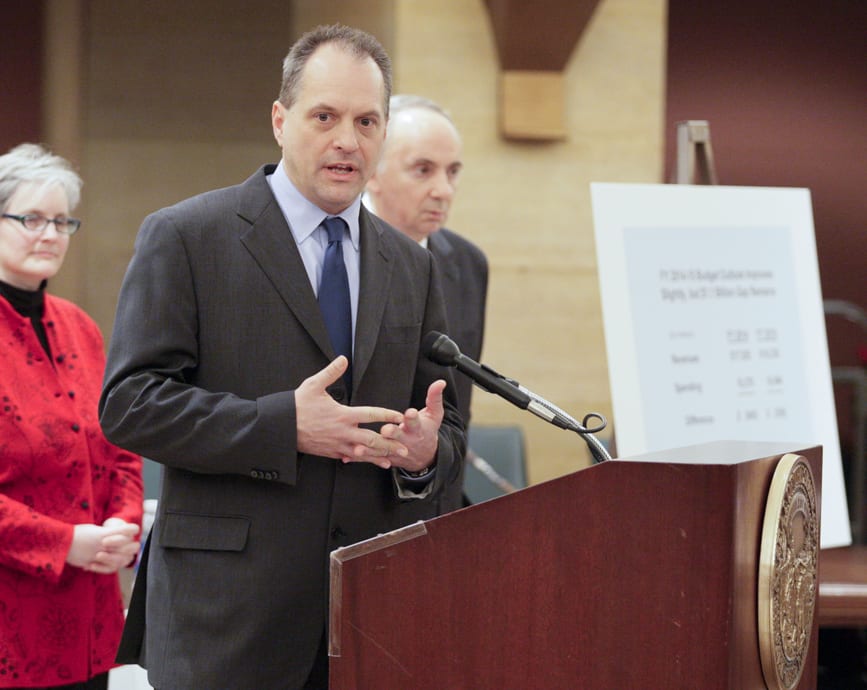 Minnesota’s economy is improving and the state budget has begun its slow climb toward solvency.

That’s the gist of this year’s February Economic Forecast, which predicts a $323 million surplus for the rest of the current two-year budget cycle. But despite the good news, top budget officials warned that the state still has a stack of IOUs it needs to pay.

Last December, MMB announced a projected $876 million surplus — the first in nearly five years. That money was used to shore up the state’s cash flow account and budget reserves, both of which had been severely drained during several years of tight budgets.

Schowalter said the new surplus will mostly go to pay back K-12 school districts, which the state borrowed from during the course of the last several budget cycles. It’s not a matter of choice; current law requires the K-12 buyback before any new spending can take place. In effect, this zeroes out not only the current surplus but any future ones until the full $2.7 billion is paid back.

“It’s going to be a while before we have a positive forecast balance, even if we have good news,” Schowalter said.

Still, overall the forecast seems to point toward better days for Minnesota. State Economist Tom Stinson said unemployment is falling, wages are growing, consumer confidence is up and the risk of another recession has dropped.

“Generally, things look good. The economy appears to be strengthening,” he said.

Barring certain global events such as an oil crisis triggered by Iran or a messy end to Europe’s sovereign debt crisis, Stinson said he expects several years of steady economic growth. He noted that Minnesota’s unemployment rate is significantly lower than the national average.

“At this point, the economy appears to be positioned for growth in 2012,” Stinson said.

That’s not to say the state is out of the woods yet. A $1.1 billion budget shortfall is projected for the next fiscal biennium — a figure that rises to nearly $2.2 billion once inflation is factored in. And that’s not counting the $2.4 billion that will still be owed to the schools.

Perhaps owing in part to these mixed messages, Republicans and DFLers had very different reactions to the forecast.

“This is good fiscal management by the House and Senate Republican caucuses,” Zellers said.

House Minority Leader Paul Thissen (DFL-Mpls) chided the Republicans for “giddiness” over a forecast that shows a long-term structural deficit awaiting the next Legislature.

“Had we balanced the budget in a responsible way … without borrowing billions from our schools, I would argue Minnesota would be a lot better off,” Thissen said.

For his part, Gov. Mark Dayton said the forecast shows mainly that the state’s economy is in recovery mode. He said neither he nor the Legislature deserves any credit for the improved forecast, and emphasized that there’s still more work to be done.

“We’re still however a long ways from getting out of our financial hole,” Dayton said.

Surplus or no surplus, the lack of a projected budget deficit this year means lawmakers won’t have to duke it out in another protracted budget battle with the governor. Zellers and Senate Majority Leader David Senjem (R-Rochester) reaffirmed their commitment to end session early this year, most likely sometime in April.

“The earlier, the better,” Senjem said.