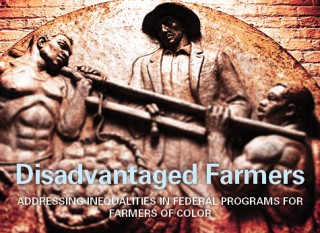 Farming is a business fraught with financial risks, including severe weather, pest and disease outbreaks, and dramatic fluctuations in both costs and prices paid to farmers and ranchers. It’s reasonable that federal policy would reduce some of the risk of agriculture and support a safe and abundant food system.

Click here to download this document. To find out more about the Farm Bill and to read our full What’s at Stake? series, go to farmbill2012.org.

Today, the farm economy and farm policy works far better for some than others, and access to federal resources is far from equitable, including blatant discrimination against African American, Latino, Native American, Asian American and women farmers. Some historic discrimination in government programs has been documented and where they were responsible, the USDA is providing compensation to claimants. Another, less tangible barrier involves how a legacy of bias in access to land and capital continue to affect the viability of farmers of color today.

This inequity in farm policy represents an enormous loss of economic and social benefits to all Americans. Many more farmers of color could be practicing innovative, highly efficient farming and supporting healthy eating by growing a diversity of foods more appropriate to our diversity of cultures. Yet for a variety of reasons—some well- documented and some not well understood—federal policy favors certain crops, certain production practices and farmers from certain demographics.

The 2012 Farm Bill provides an opportunity to address injustices that exist in our current agriculture policies, many of which exacerbate economic challenges faced by farmers from socially disadvantaged racial or ethnic minority groups and new farmers with limited resources.(1) We cannot let this opportunity pass.

Land ownership in the United States continues to be impacted by federal, state and local land distribution policies throughout the past two centuries. The most well known are the federal Homestead Acts of the late 19th and early 20th century. The acquisition of Native American land and the gifting of the land to settlers that were overwhelmingly of European descent formed the demographic characteristics of many rural farming communities that exist today. In the West, alien land laws and World War II incarceration contributed to the exclusion of Asian American and other minority farmers from land ownership.

Efforts have been made to rectify this situation. For example, government programs during Reconstruction and the Great Depression were aimed at the resettlement of African American farmers on arable land and to support agriculturally based communities,(2) and several treaties with Native American tribes have secured land through reservations for agricultural use. Despite these efforts, land distribution is still far from equitable, as people from racial and ethnic minorities represent 36.3 percent of the American population(3) and only 7.75 percent of farmers.(4) The disparity occurs and has actually grown despite the presence of government programs designed to provide access to capital and training for socially disadvantaged farmers.(5) 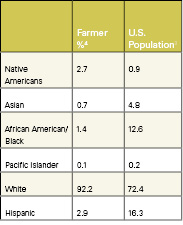 Note: The percentages of U.S. population do not equal 100 percent because respondents may have been counted in more than one category.

Access to USDA programs has not been equitable. Many of these discriminatory practices came to light in the 1997 Pigford lawsuit, brought against the USDA by black farmers who claimed they had been discriminated against by facing unwarranted denial or untimely processing of loans, and that the USDA had not been responsive to complaints of discrimination. A USDA study found that from 1990 to 1995, loans received by black farmers were on average 25 percent less than that received by white farmers, and that 97 percent of disaster payments were granted to white farmers versus 1 percent to black farmers.(6)

A settlement to the Pigford case provides payments to eligible farmers for damages and foreclosures due to untimely loan decisions. Ultimately, a number of eligible farmers did not meet the application deadline, and additional extensions were allowed in 2010. Other cases of USDA discrimination have also been recently settled. The Keepseagle settlement with Native American farmers was announced in 2010,(7) and a claims process was established for Hispanic and women farmers in 2011.(8) These lawsuits highlight the complexity of access to financial support faced by farmers from racial and ethnic minority communities.

The current agriculture funding structure, from research funding to crop subsidies, is heavily weighted to support increased production of commodity crops, crops that provide low-cost inputs for agribusiness corporations. These crops are often grown on high quality farmland, such as the corn and soybeans in the Midwest, wheat in the Great Plains, and rice, sugar and cotton on the richer soils of the south. Farmers of color were not only historically excluded from access to the best farmland, many of the southern crops were historically grown on the backs of slave labor. The best opportunity available to farmers of color tended to be specialty crops that often fall outside of these support programs.

Pigford and other settlements documented, access to farmland, capital and resources has had a dramatic impact on the demographics of farming, and those inequities continue to play out in commodity payments. Farmers from socially disadvantaged minority groups represent about 8 percent of farmers in 2007,(4) yet they only receive 2 to 4 percent of the loans and other federal farm program payments provided by the USDA.(9) This is partially because the crops that farmers of color grow are clearly not where the money is. Only two percent of oilseed and grain farmers and three percent of dairy farmers are farmers of color. In contrast, 18 to 20 percent of farms that grow vegetables, melons, fruits and tree nuts are operated by farmers of color.(4)

The difference in cropping systems cannot fully account for the inequality in funding for farmers of color. As many farmers of color tend to have smaller operations, they are challenged with some of the well documented forces in policy and oligopolistic markets that favor large farms. In 2007, African American farmers who received Commodity Credit Corporation (CCC) loans received about 32 percent of the funding of the average CCC loan to white farmers.(4,6) Payments from all other federal farm programs to African American farmers totaled less than 50 percent of the national average payment.(6)

Efforts to remedy the situation are inadequate

Congress should be commended for the creation of USDA’s Office of Advocacy and Outreach in the 2008 Farm Bill. The office includes a Socially Disadvantaged Farmer and Rancher program that helps to coordinate granting opportunities, technical assistance and education efforts, and seeks to improve participation in all USDA programs. Yet it remains a challenge to get resources to farmers and ranchers who need it. Much of the funding to support socially disadvantaged farmers, as with many USDA programs, goes to university initiatives and large nonprofits. These are the entities that have the infrastructure and experience to successfully apply for and administer USDA grants. While these organizations often conduct outreach to farmers that is more successful than federal government outreach, they also apply additional administrative costs and often don’t have as direct a relationship with the intended audience—the farmers—as hoped.

Another challenge is that funds available for disadvantaged farmers often do not correspond to the priorities of the intended recipients. For example, the Administration has identified expanding agricultural exports as a priority initiative (http://www.ustr.gov/nei). And while tribal nations and other socially disadvantaged communities are eligible for granting opportunities that support expanded exports, many of these communities are more interested in feeding local communities and don’t have the infrastructure, experience or desire to seek international markets.

Effectively addressing the inequitable opportunities available to farmers of color—and the resulting benefits that accrue to all of us from having a greater diversity of farmers, cropping systems and foods—is not something that can be addressed simply by instituting another government program. It requires greater recognition of the unequal distribution of power throughout the institutional structures of our society.

Often without intention, the Farm Bill has several policies that implicitly reflect the cultural biases of lawmakers and the advocates that have access to the lawmakers. Remediating this situation requires a Congress and administration that more effectively represents farmers of color and appreciates the missed opportunities from not having more of these farmers on the land.

One immediate place to start is to address the cultural barriers to farmers of color receiving USDA grants. Successful grant applications are generally written by experienced professional grant writers, not farmers actively working the fields. These grant applications are generally peer reviewed by academics and other professionals that tend to favor that particular tone and style of proposal, not necessarily the most agriculturally innovative and competent proposals. One of the authors of this fact sheet participated in such a review committee and found that less than 10 percent of reviewers were professional farmers, and less than 10 percent of reviewers represented socially disadvantaged groups.

This situation could be rectified by establishing a new system of peer review for competitive awards intended to support socially disadvantaged farmers. The system would establish distinct funding pools, one for professional programs such as universities, extension and nonprofits, and another specifically for farmers from socially disadvantaged populations. Each funding source would be managed by a committee of peers who reflect the key stakeholders in the academic and farmer cohorts, respectively. It would promote fairness in funding based on competitive criteria established by a committee of professional peers with common goals.

More opportunities for farmers of color will also emerge as agricultural policies support a greater diversity of food production and cropping practices. The Beginning Farmer and Rancher Opportunity Act and the Local Farms, Food, and Jobs Act are two current pieces of legislation that support farmers building innovative farm enterprises.(10) Disadvantaged farmers are far more likely to focus their farms on direct marketing opportunities than on capital intensive commodity production.

The 2012 Farm Bill is an immediate opportunity to promote fair treatment of those people who provide food for our nation, and a forum to begin to address inequity in all aspects of our society. These are small but important steps that we can take for a more inclusive farm policy. In the long-term, and beyond the Farm Bill, we can begin to address inequity within our governmental agencies by building structures that require the inclusion of people from socially disadvantaged groups in the decision-making processes.