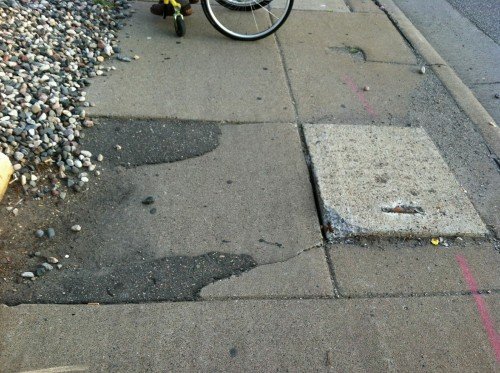 A challenge for a wheelchair.

The recently released Making Strides 2014 Accessibility Survey provides a wealth of data about the challenges faced by members of the disability community as they seek to access the Green Line. The report also makes clear why it’s so important to make sure that people with disabilities can get to the station safely and easily.

Background data drawn from Minnesota Compass research shows we’re not dealing with just a small number of people. Currently,  approximately 10% of Minnesotans have a disability, and in some areas of the Twin Cities that percentage almost doubles; for example, in downtown Saint Paul, more than 18% of the population has a disability . There are also heavy concentrations of people with disabilities living along the Green Line where 44% (7 of 16) of Saint Paul Public Housing Hi-Rise buildings are located.

Another reason it’s important to make sure people with disabilities can get to the station is that many are regular transit riders who depend on the bus or the light rail to get around independently and participate in the community. The report cites Metro Transit numbers that show heavy use of the Green Line: “In September 2014, the third full month of Green Line service, seven of the fourteen stations in Saint Paul had more than 1,000 boardings by people with disabilities, …and more than 2,000 boarded at Central Station.” Waiting to board the light rail

The 2014 Accessibility Survey was planned and carried out by the District Councils Collaborative (DCC) in partnership with members of the disability community, some of whom had also participated in the DCC’s 2012 Walkability Survey. Many of the barriers identified by the Accessibility Survey are ones that had already been noted in 2012, including broken, uneven, too-narrow or missing sidewalks, inadequate curb ramps, snow blocking the sidewalk, and missing or worn, faded crosswalks. The survey also surfaced a number of new issues which “…create accessibility challenges that an able-bodied person may not notice.” Among these are: steep sidewalk grade or slope, blocked sight-lines for wheelchair users, accessible pedestrian signals that are unreachable, inoperable or sound set too low, LRT tracks with gaps that are dangerous for wheelchairs or walkers, signal timing that does not allow enough time for people with limited mobility to cross, and an elevator from station platform to skyway, that closes at 9:00 pm at Central Station in downtown Saint Paul. More than 40 people attended the March 11th release of the Making Strides 2014 Accessibility Survey, many in wheelchairs. After the presentation of findings and recommendations, the group engaged in a vigorous discussion of strategies and actions to make the trek to the Green Line safer and easier for people with disabilities.

Among the opportunities identified to help move the work forward, there was particular interest in:

1. Building public awareness of the issues by engaging and collaborating with a broad range of businesses, organizations, healthcare agencies, elected officials, government agencies, and advocates for equity. Using a variety of communications tools including social media and the 2 1/2 minute documentary produced in conjunction with the survey — First Last Mile: Accessibility on the Green Line.

2. Monitoring the schedule of planning, funding and construction of transportation projects and providing expertise based on direct experience to identify issues of concern to the disability community. Working with Public Works, Met Council, Metro Transit and MnDOT planners and engineers to incorporate improvements into the project to address those concerns. 3. Working with the Olmstead Implementation Office to meet the goals of the Minnesota Olmstead Plan to ensure that “…all people have access to reliable, affordable, accessible transportation, which increases community employment options, housing choices, educational opportunities, and social interactions.” Most people are aware of the federal Americans with Disabilities Act (ADA), but few know about the Olmstead Plan. The DCC 2014 Accessibility Survey includes a brief history and description of the Olmstead Plan (Making Strides 2014 Accessibility Survey, page 6).

“In 1999, the US Supreme Court heard a case, Olmstead v L.C., that involved two persons with disabilities who were kept in an institution even though health professionals declared them fit to live in a community-based setting. The Court decided that ‘unjustified segregation of people with disabilities violates the Americans with Disabilities Act.’ This landmark civil rights decision means that states must offer services in the most integrated setting.” States were also encouraged to create their own Olmstead plans. Here in Minnesota, as part of a 2011 settlement (Jensen et al v. Minnesota Department of Human Services, et al), an Olmstead Subcabinet was established and charged with developing and implementing a statewide Olmstead Plan to address seven areas of community life: employment, housing, transportation, supports and services, lifelong learning and education, healthcare and healthy living and community engagement. The first draft of the plan was submitted in October 2013 and has undergone several revisions to respond to the Court’s finding of “…significant deficiencies, including a lack of measurable goals and a lack of accurate reporting…”

In its latest iteration, the Transportation section of the plan pledges that “people with disabilities will have access to reliable, cost-effective, and accessible transportation choices that support the essential elements of life such as employment, housing, education, and social connections.” However, U.S. District Judge Donovan Frank, in a January 9, 2015 order, asks for a more concrete description of when and how the proposed strategies will be implemented. “To effectuate the State’s transportation goal,” he states, “the Revised Olmstead Plan must contain strategic, concrete proposals with specific timetables.” Judge Frank also makes clear that he’s becoming impatient with the length of time it’s taking to draft a robust Minnesota Olmstead Plan. He concludes his most recent order by writing: ” The Court urges the State to apply the same passion, care and concern with persons with disabilities that the State proclaimed when it agreed to ‘develop and implement a comprehensive Olmstead Plan’ more than three years ago at the time of the Settlement Agreement. Meaningful progress must be realized across the State. Justice requires no less.”

A new Revised Olmstead Plan was due to be submitted to the Court last Friday, March 20, 2015. This is a great opportunity for community members to continue the work begun with the DCC’s Making Strides 2014 Accessibility Survey. Hopefully Judge Frank’s no-nonsense oversight will provide the backbone to ensure that Minnesota’s Olmstead Plan is successful in ensuring that people with disabilities have transportation options that will enable them to get from A to B and participate as fully as possible in the life of the community.