“I have this nagging suspicion that our manufacturing problems are not really problems at all, but rather a symptom of a dysfunctional relationship with dirt.”

That may not seem like something worthy of testimony before Congress, especially coming from a professional teevee show host.  But these are no ordinary times, and an ordinary (if really good looking) guy like Mike Rowe is extraordinary for stating what might be the most stunning statement of the obvious:

“…The bulk of our output (is) tied to clean jobs. What do we have to show for it? Record unemployment, a looming skills gap, a crumbling infrastructure, and a dearth of manufacturing.“

The conclusion?  America needs to get dirty again.  Simple – yet brilliant.

Mike Rowe  is famous as the host of “Dirty Jobs”, a show that celebrates the virtues of hard work and making things happen.  Rowe himself could have done many things for a living, and even sang with the Baltimore Opera.  But his career is spokesman for the people who make our world what it is and then have a much needed shower. “We’ve made work the enemy,” Rowe says. “Essentially we took the nobility and the necessity out of it and replaced it with this vague sense of drudgery.”

There are many ways to look at this through data, and they all add up to the same thing.  The decline of the Middle Class™ in the USofA is directly related to the decline in manufacturing as a share of GDP and of jobs.  There is a terrible “infrastructure deficit”, the fancy term for crumbling bridges, water pipes, and public buildings that needs immediate attention.  And, looming off in the distance, we can anticipate a shortage of skilled trades once the Baby Boomers start to retire in droves.

This is the other side of the discussion of a “skills mismatch” at the heart of “Structural Unemployment”.  It’s not just a lack of skills, it’s a lack of pay – and respect.

Thinking about how to present the problem I realized that I was not going to come up with better words than Rowe pronounced in rich baritone.  The problem is that your pay is directly related to how little actual work you do during the course of your day.  So I made up a fake chart that probably says more than any real data ever would. 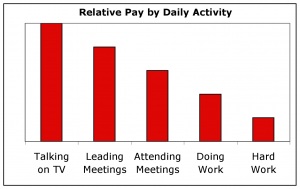 It’s not that we need to get dirty, although that would be a wonderful thing.  It’s that we do not value getting dirty or even sitting down and producing something of value.  It’s a direct result of our denial that work creates all wealth.  Dirty work is simply easier to discount because it looks even worse on teevee than ordinary, clean drudgery.

There are a lot of people who think that line factory workers and skilled trades already are paid very well.  Anyone looking at a spreadsheet with data on the cost of workers can see that the employees cost big factories an awful lot of money.  But how much of that is the overhead per employee?  I’ve asked around, and it seems that small businesses run about 30% overhead and medium sized ones about 50% – GM used to use 105%.  That means that a skilled trade paid $40k per year (about $20 an hour, a decent rate) costs a typical company $52k-$60k per year, and as much as $82k.

Why so much?  First of all, does it really make sense that employers should have to pay health care benefits?  And if not them, who should provide this much needed insurance?  In addition, every HR department is nothing but pure overhead – and they don’t get dirty on the job.  From there add in recruitment, training, 401(k) contributions, vacation, and then add 7.62% employer FICA contribution.  It adds up quickly.

For every dirty job, there is an army of people taking a cut here and there who will never get dirty.  The reason we don’t pay people well for getting dirty has to do with what we value, certainly, but also our expensive (and clean) overhead.  Imagine if someone who seems expensive at $40k in pre-tax pay actually got the $52k-$60k  they supposedly “cost”.

Mike Rowe has an excellent point and I can’t make it any better than he did.  But the problem runs even deeper than the need for dirty jobs and decent respect for a patina of filth at the end of work well done.  Everything is set up against making hard work pay the way it once did when we were alone at the top of the world.  That will have to change before dirty jobs get the wages – and respect – they deserve.