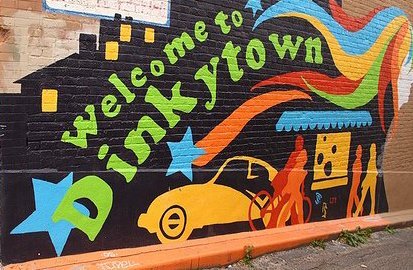 If you do not change direction, you may end up where you are heading. –Lao Tzu

Ten months ago, Dinkytown was at one of those unmistakable crossroads of change rife with both crisis and opportunity. The businesses in Dinkytown are survivors of change, so this was nothing new, but this time, a perfect storm of factors came close together. On the plus side, the City of Minneapolis and Marcy-Holmes Neighborhood Association were taking much more notice of Dinkytown. But at the beginning of 2014, Skott Johnson, the longtime leader of the Dinkytown Business Association, known as DBA, closed his business at 1300 4th St. S.E., Autographics, and left the Twin Cities. The old Marshall High building, UTech, had been demolished and the House of Hanson would follow close on its heels. And local developer Kelly Doran was proposing to build a hotel on 4th Street, which would entail taking out yet more old low-rise buildings housing small shops and restaurants. It’s no exaggeration to say the future of Dinkytown’s identity was up for grabs.

Despite being an off-and-on president, Skott Johnson was the full-time powerhouse behind the DBA. He was both effective and beloved; people still miss him and speak of him fondly. When he left, the organization began to flounder, mostly because Johnson held a lot of the institutional knowledge in his head. And, the other positions within the DBA were informal; the structure was loosely defined.

When the DBA tried to regroup to fight the hotel plans and other battles, they found that their paperwork was not in order and their legitimacy as representatives of the businesses was open to question. Since a new organization had to be established anyway, it just made sense to start from scratch. So the DBA was dissolved and a new DBA, now named Dinkytown Business Alliance, was formed, with a new charter and an elected and committed board. The new DBA has a built-in relationship with the city and with Marcy-Holmes Neighborhood Association. And the new name points to its new direction—connecting and inclusive, rather than the closed and passive sounding “association.”

An organizational development consultant was hired: Cara Letofsky, highly respected and with deep connections at City Hall and elsewhere. The City Council denied Doran’s permit to build the hotel. The development that went in mid-2014 on the old House of Hanson corner looks to be a success, as an upscale housing development also housing the first “boutique” Target Express, which provides some grocery shopping and some jobs for area students and residents. And by the early fall of 2014, the new DBA was off and running. Mike Mulrooney, owner of Blarney, was elected president. The organization, collaborating with neighborhood associations, won a Great Streets Grant from the city, with three development goals: 1) to grow the DBA organizationally (Letofsky’s main task as consultant); 2) to develop and implement a marketing plan for Dinkytown; and 3) recruitment and retention of businesses.

Besides Mulrooney, the other officers or unofficial leaders and strong participants in the DBA (not an exhaustive list) include Randall Gast of Qdoba, Jason McLean of Loring Pasta Bar, Georgia, Jim and Antigone Sander of Kafe 421, Liz Johnson of Magus, Greg Pillsbury of Burrito Loco, and the one person I talked to the most, Kristen Eide-Tollefson of the Book House, now relocated on the second floor across the street from its former home in the House of Hanson. Kristen has long been active in Dinkytown and is the remaining original Book House owner out of two couples who started it in 1976. Her position on the DBA board currently is communications, editing the newsletter and other functions. She says that Dinkytown has always been a business incubator, a place where businesses start and try out new innovations. She points to the tiny Target as another example of that, even if it is backed by a big corporation. Another surprise—the trendy clothing shop Gina and Wills is actually a consignment shop run by Goodwill Industries.

With the first of their three goals underway, the attention is now on the second—marketing. A request for proposal process recently closed and the DBA is soon to choose a marketing director to implement a chosen plan. Dinkytown’s identity is the issue, along with overcoming some perhaps false conceptions about the area. Several of those I talked to spoke of making Dinkytown a “destination” for people all over the Twin Cities and over many demographics. Dinkytown is not just a student neighborhood, nor just a nostalgia trip for old Bohemians. The Book House, for instance, is legendary in the book world, and definitely worth the trip. Another challenge to overcome is transportation; drivers assume there is no parking, but although some surface lots have been lost to development, there is actually a lot more parking than in other similar business districts. Dinkytown offers a mix of bars and coffee shops; Blarney is popular all over the city, especially on game days, and the venerable Espresso Royale hosts a satellite book shop from the Book House. Dinkytown offers interesting and sophisticated shopping venues, five churches, a library, and live music at the Varsity theatre. It has a huge array of dining options, from Shuang Cheng’s highly reputed Chinese fare, to quick Japanese at Sushi One Two Three, to traditional Italian-American at Vescio’s, to international fine dining at Kafe 421 and the Loring Pasta Bar. With so much going for it, Dinkytown looks to be finally gaining the respect it deserves.