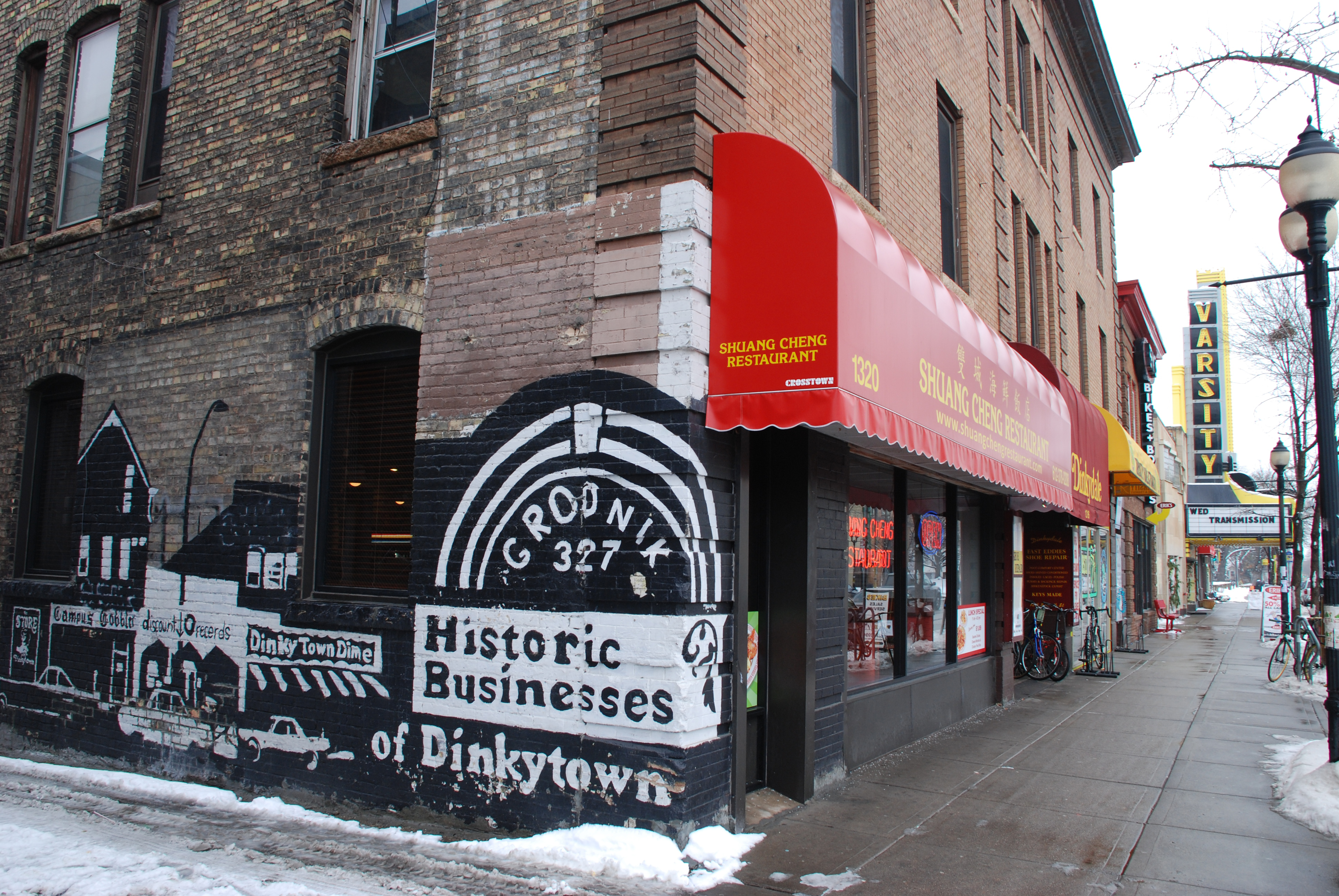 About 100 Dinkytown business leaders, residents, and neighbors met with a city planner March 20 at the Varsity Theater to begin designing a small area plan for the business district adjacent to the University of Minnesota.

Haila Maze, principal planner for the city, said the plan could be completed by the end of the year, even though a six-story mixed-use development that sparked the discussion could be under construction by then.

“Why do you need a plan if development is already happening?” Maze asked rhetorically. “Sometimes you have to step back and look at the whole situation, not just look at projects piece by piece. We can be proactive.”

“When change is going to happen, let’s be responsive to it,” she said.

The small area plan would amend the city’s master plan and complement the Marcy-Holmes Neighborhood’s comprehensive plan, she said.

The meeting and the small area plan are responses to a proposed six-story mixed-use Opus development that would fill half of one block in Dinkytown’s four-block core. An even larger new mid-rise apartment complex is already under construction at the former UTEC site on 14th Avenue between Fifth and Sixth streets.

Skott Johnson, president of the Dinkytown Business Association, and 3rd Ward Council Member Diane Hofstede presided at the meeting, though Maze made the presentation and responded to the audience questions and comments.

Johnson encouraged people to participate in the process by attending weekly meetings at 2 p.m. Thursdays at Burrito Loco restaurant at 418 S.E. 13th Ave.

“This concept of a small area plan is not coming from the city per se,” said Lynn Nyman, executive assistant at the Loring Pasta Bar & Varsity Theater. “We are Dinkytown, mostly business people. A lot of people are students or guests or friends or associates. We chose to initiate this process. We regret that we didn’t do it sooner.”

Nyman told students present to attend the meetings if they want to be involved in developing the plan.

“We are a team and we drive this car together,” Nyman said. “There is an urgency. We cannot wait. … We have to do some things right now. The purpose of this is to be transparent. If you want to be involved, you should come to the meetings.”

A small area plan looks at a range of issues for an area, Maze said, including future land use, the urban character, economic development, housing, transportation, and the public realm.

“The plan provides guidance for public and private investment and development,” Maze said.

“Once a plan is adopted, it becomes city policy and everything has to conform to it. It is used to evaluate proposed development projects to be consistent with long-range goals,” Maze said.

“Dinkytown is classified by the city as an activity center and, as such, it is a high-traffic area where development is a city priority,” Maze said.

“Rapid change in terms of development taking place requires a proactive response,” she said. “Larger issues need to be addressed that shouldn’t be handled piece by piece and a Dinkytown plan provides an opportunity to supplement the work being done for the Marcy-Holmes Neighborhood plan update.”

Showing a map with different colors indicating the commercial, residential and public institutional uses, she said, “Most areas of the city are not this colorful. This area has quite a hodge-podge of uses.”

It is mostly zoned C-1 and C-2 for small-scale commercial nodes with adjustments on the edges, and it’s also a high-traffic corridor that’s well served by bus and bike lanes.

In fact, Maze said, surveys show that Dinkytown is the busiest bicycle and pedestrian area in the entire city, perhaps the state and the Midwest. “It’s so amazing. It’s so intensively part of this area. Some say we might want to save that.”

Conservation districts don’t have to be for historic purposes only; they can be designations to preserve certain types of business activity, for example.

“We have many obligations and tensions here,” she said. “This is a good time to explore and ask what is historic. What do we want to preserve and what is the best way to do that?”

“If we want smaller scale business and shops – are there things we can do to support that?”

Doug Carlson, president of the Marcy-Holmes Neighborhood Association, said his neighborhood will update its master plan but wants to do it with care.

“We’re not interested in losing any part of Dinkytown in that process,” he said, contrasting it with the business district on the east side of the University. “In the aftermath of Stadium Village development, I would say the character of Stadium Village has been devastated. We certainly don’t want that to happen here.”

“We welcome your participation. We would also like to engage all those who are present,” he said.

Maze introduced Samuel Ero-Phillips, one of three artists with Intermedia Arts working with the city planning department on the Creative CityMaking project. The artists will work with Dinkytown and city planners to add creative and artistic perspectives to the long-range plan.

Matt Hawbaker, an employee of the Book House, 429 S.E. 14th Ave., said his business and Dinkytown are threatened treasures.

“The pace of development in Dinkytown is moving much too rapidly,” he said. “We could be at the middle stage of this process and the Opus development could already be up. The pace is moving so fast and the precedent is being set for developers to build as they please.”

Maze admitted that the “private sector is always going to be moving a little bit faster than we are, but there will be hearings and a public process around any larger projects.”

Hofstede agreed. “This is an open process and we want everybody to be engaged.” Check for the City Council meetings and for the Marcy-Holmes meetings, she said.

In an interview, Carlson said that the Marcy-Holmes Neighborhood Association endorsed the Opus development at its meeting on Tuesday.

“The board supported the project in its current form not to be revised later, provided that the development is able to accommodate the lost parking spots during construction,” he said.

“We are concerned about the activity and traffic of the two construction projects across the street from each other at the same time,” Carlson said. “We didn’t include that in the motion, but Opus made a good-faith commitment to minimize the land closure and to coordinate the vehicles traveling to the sites.”

“The main issue is concern that Dinkytown will become another stadium village with buildings out to the sidewalk and going all the way up from there, losing the character of the street. No one wants that to happen.

“The Opus project has really tried hard to have the sidewalk scene similar to the long-time landscape. Along 14th Avenue, the levels above the second floor are set back 26 feet so they’re hardly visible from the street. Opus has been very cooperative in trying to preserve the streetscape.”

Carlson said he also favors making Dinkytown and other areas of his neighborhood into conservation districts. “In the near term, we’re very concerned that other parcels might change hands and we won’t have as respectful a design.”

The MHNA board asked the city council to move quickly to approve the idea of conservation districts – a process that allows the neighborhoods decide what they wish to preserve and on what basis they will save buildings and districts.

“We certainly do want to make Dinkytown a conservation district and to include some of the old homes in the area,” he said. Some call this “historic district light,” he said, because neighborhoods can write their own guidelines to preserve certain kinds of commercial uses or certain types of housing.