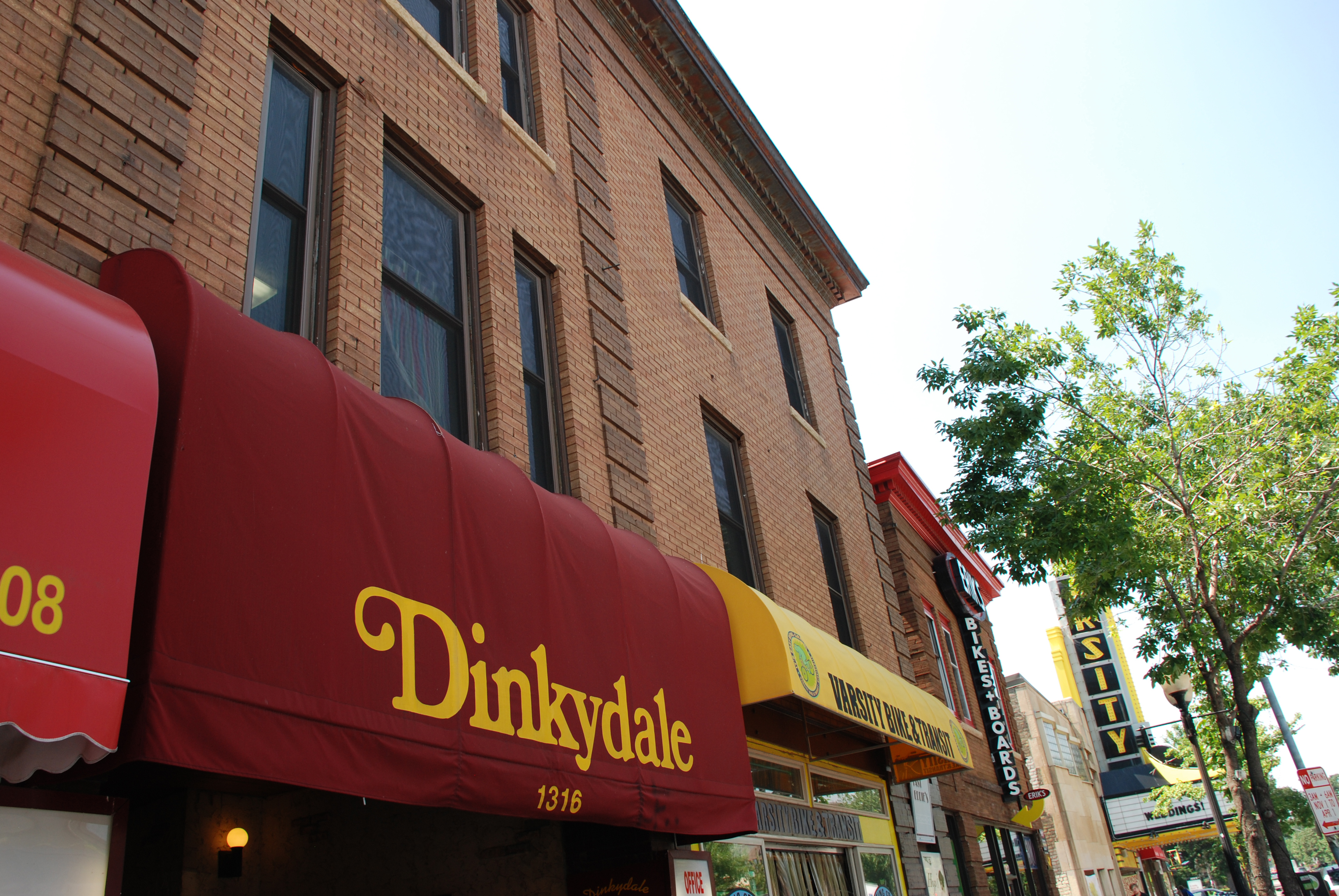 Two Dinkytown businesses displaced by the proposed Opus mixed-use apartment and commercial building have reopened in new locations, while the Minneapolis planning commission has forwarded the Opus proposal to a city council committee.

The Podium, a guitar store that dates back to Bob Dylan’s Dinkytown days in the 1960s, will open under new ownership at 4151 Minnehaha Avenue in South Minneapolis.

Jeff Molde, who had owned the Podium for 14 years, announced that he would retire from the business when he was displaced by the sale of his building that also housed the Book House and the House of Hanson grocery. Molde said he tried unsuccessfully to find other viable locations to relocate.

Since then, however, he sold the Podium name to a former employee who merged it with Guitar Rodeo on Minnehaha, said David Roos, who worked for the Podium for 28 years and has just started with the new business.

The new owner, Jim Tordoff, worked at the Podium for more than eight years in the 1970s, Roos said. In an interview with Fox 9 News, Tordoff said he worked in Dinkytown during the Dylan era.

“It’s not Dinkytown,” Roos said about the new location, “but the parking is a whole lot easier.”

He admitted that the inventory was currently much lower than it was in Dinkytown, but, he added, “That’s going to change real quick. We’ll double or triple what’s here.”

On July 10, the Book House opened in its new location on the second floor of Dinkydale, 1316 Fourth Street Southeast, around the corner from its old site.

Although the current site is smaller than the old store, customers can still browse “the best of the Book House” inventory in the main store and a rare book room across the hall. Other books can be paged from several other storage locations within a few minutes or ordered online. Patrons can also order online to pick up books in the store.

Across Fifth Street Southeast from their old building, developers plan to include a full-service grocery store in the new mixed-use building under construction on the old UTEC site.

“We are negotiating a lease right now with the landlord,” said Jeff Maurer, owner of Fresh Madison Market near the University of Wisconsin in Madison. “We are confident we can come to an agreement, but it is still possible that we won’t come to an agreement. The developer knows what our plans are for the site.”

Maurer, who lives in Madison, was born and reared in St. Paul. He said he worked for Byerly’s for 25 years and understands the Twin Cites market, including Dinkytown.

“We believe most of our customers walk here, ride a bike or take a bus,” he said comparing his Madison store to the proposed Dinkytown one.

“It’s a large density population of students and faculty and people who live in the area,” he said. “We’ll have a full-service grocery store with a lot of fresh foods and freshly made products.”

Maurer said he plans to call the store Fresh City Market and, if negotiations are successful, he will open his second store near Purdue University in August 2014 and his third one in the UTEC site later the same month.

The UTEC developer, Jared Schenk of GEM Realty in Chicago, could not be reached for comment for this article but he sought and received approval of early-morning hours for trucks to use the loading docks in the new building.

Across the street, the House of Hanson will be demolished if the City Council approves the Opus plan to build a six-story building to fill much of the north end of the Dinkytown block.

The planning commission approved the development on a 6-0 vote on June 24, despite presentations and a petition by the Save Dinkytown group with 3,000 signatures asking the city to reject the rezoning from C1 to C3A that the project requires.

The proposal goes next to the City Council’s zoning and planning committee, which meets next at 9:30 a.m. July 25 in 317 City Hall, the City Council chambers. If it passes the committee, the opponents concede, it may be impossible to stop it, although some of them have said the election could stop the momentum of the project if incumbent council members are defeated.

Owners of three businesses that would be displaced endorsed the Opus project at the planning commission. Susan and Patrick Duffy, owners of Duffy’s Pizza, spoke for the project.

Laurel Hanson Bauer sold her building and parking lots to Opus, which she called “a quality developer who would cater to the unique character of Dinkytown”—a neighborhood in which her family has lived and worked for over 80 years.

“I have personally lived the constant change beginning with my grandmother’s house located where our current parking lot is now,” she said. “My other grandmother’s house was in the middle of parking ramp C, one of my parents’ homes is currently Bierman Field, another is a green space across from the Ronald McDonald house on U of M property. My grade school is a park, my patrol corner is in the middle of 35W, and my high school is one big hole right now where Marshall University once sat.”

“Today we have an opportunity to welcome more customers, create an environment for added businesses since lost, such as a bakery, florist shop and gift shops. This project also includes public parking at the street level and below lighted, secure, and accessible to all with new separate elevators and security system. The community embraces a new larger grocery store across the street from our convenience store. It’s time for us to bow out gracefully to allow others to succeed.”

Architect David Graham defended the project as infill architecture that replaces surface parking and “continues the experience of Dinkytown” with individual store fronts that visually continue the “streetscape scale” of the two-story buildings along 14th Avenue. Upper floors are set back 29 feet to make them less visible from the street.

Long-time resident Gordon Kepner, who coordinated the opposition, said he spoke for thousands of people who see the issues as much larger than the individual Opus project.

“We specifically excluded such development from Dinkytown,” he said about the Marcy-Holmes long-range plan on which he worked. “We wanted to preserve and protect its unique character, which in our view, is incompatible with this project.”

If the project is approved, Kepner said, the city plan is meaningless.

Matt Hawbaker, a manager of the Book House and leader of Save Dinkytown, said the small community has been home to generations of students.

“Dinkytown is an entry point to life in Minneapolis,” Hawbaker said. “As a college student, it expanded my idea of city life. It gave me a job and sense of belonging to a small village community. This project is upsetting to me personally.”

He cited 3,000 signatures and a resolution from the DFL city convention against the project.

Two students—one in favor and one against the project—said they draw inspiration from living, studying, and shopping in Dinkytown.

The Minnesota Daily reported July 10 that the manager of another Dinkytown business, Café Espresso Royale, feels threatened by the sale of his building.

Green Mill Restaurants CEO Paul Dzubnar has purchased the building that houses the last coffee shop in the heart of Dinkytown and Al’s breakfast in an adjacent lean-to. As Dzubnar has said since I spoke with him in February, the two businesses have leases well into 2014 and he has no plans to displace them. The building is an investment that includes rental residential units upstairs.

If he does develop the property, the Daily reports, Dzubnar said it would be a Town Hall Brewery taproom, rather than a Green Mill Restaurant.