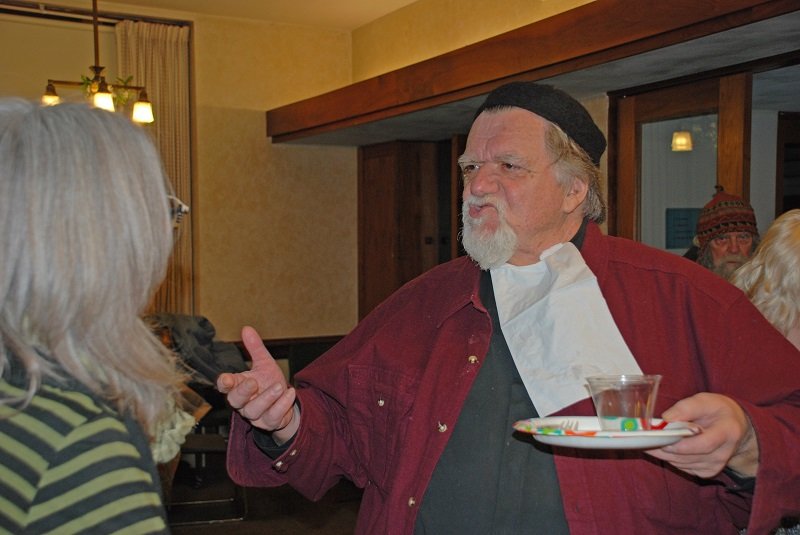 (Photo by Bill Huntzicker) The Rev. Bill Teska, an Episcopalian priest in the University community since the 1970.

The Rev. Bill Teska, who leads a small Minneapolis Episcopalian congregation that meets in the University Baptist Church at 1219 University Ave. S.E., and Don Olson, who spent 20 months in federal prison for disrupting draft offices in 1970, led a discussion on Nov. 22, on the role of religion in the peace and civil rights movements of the 1960s.

Many of their old meeting places near Dinkytown in Minneapolis no longer exist.

Olson, who spent 20 months in federal prison in Springfield, Ill. for disrupting Selective Service offices in Winona, was among the Minnesota 8 – draft resisters who attacked draft records in several Minnesota cities in 1970.

Olson said churches played a role in the social change of the ‘50s, ‘60s and ‘70s. One of the meeting places was the Wesley Foundation at 12th Avenue and Fourth Street with people who were “very much involved with the draft resistance movement.”

“They served a couple of meals a day at the church, early in the antiwar movement in 1966. The early meetings of the Vietnam mobilization against the war began there in the basement. We planned the draft information center and smoked some dope there occasionally,” he said. The building later became the Little Red Schoolhouse. It has been torn down and replaced by a recent Doran apartment building.

“The Newman Center at 17th and University was also important,” Olson said. “The Newman center was more student oriented than the St. Lawrence church on the other side of Dinkytown.” The Newman Center building has also been demolished.

Olson said he recently called a man who was a young priest there in 1957, and although he was critical of efforts to save Dinktytown, he appreciated the music at the 10 O’Clock Scholar coffee house.

A more activist priest was Father Harry Bury, who began preaching against the war as soon as he got here in 1965, Olson said.

“Father Harry Bury was a much-beloved priest from 1965 to 1970,” who celebrated Vatican II. “After Vatican II, Catholics could be more likely get conscientious objector status because of the just-war definition,” Olson said.

He took out a $10,000 bank loan to take 30 people from here to an international peace conference in Paris and persuaded singer John Denver to do a benefit concert to pay it off, Olson said. He once chained himself to the U.S. Embassy in Saigon to protest the war he put up the North Vietnamese flag on a courthouse.

Teska said Father Bury got arrested for doing mass in St. Peter’s Square. “He was literally a prisoner of the Vatican.”

Olson said he called a man who was a young priest there in 1957. “He was critical of our efforts to save Dinkytown not the antiwar activist that Father Harry Bury was.”

“Newman Center was tied not just to the University but to Dinkytown,” Olson said. “They brought the Catholic worker founder in 1963 for a week of talks on campus on Christian anarchism, peace and service to the poor.” They had a Catholic worker farm in southern Minnesota.

Gene McCarthy was there exploring his Catholic beliefs of the time. They also brought in community organizer Saul Alinsky, who taught people how to protest, and comedian and protestor Dick Gregory as a speaker.

Rabbi Louis Milgrom, director of the Hillel House for Jewish students, brought in people to discuss race and religion.

Olson also said modern dance lessons were offered in a small church on the edge of Dinkytown that also no longer there.

Author Nor Hall said she started at Beloit College in Wisconsin on a Greyhound bus pass in 1966 to visit great American churches that he grandfather had studied. “We traveled the eastern and southern United States comparing six coffee house ministries with six old institutional churches,” she said.

A friend in Greenwich Village took her to a church that had “an amazing dance program” where the minister took us to “a huge neighborhood meeting” where the guest speaker happened to be “Timothy Leary, who talked about putting LSD in his grandmother’s breakfast milk to enlarge her consciousness or something.”

She wanted to study the liturgy of the Anglican Church on the bus trip led by Teska, “this radical priest from Minnesota talking about communal living and monastic ideals.” She and Teska in 1972 engaged in “theological conversation about the role of communes in the United States at that time and what the church ought to be in conversation about.” They worked with a commune that had a house in the city and a farm in the country.

“The most exciting development is the need of a north country coop that would be a real service to the community and would produce some income,” she said. “I worked for the coop; I learned to cut cheese and weigh nuts.”

“My biggest claim to fame,” Teska said, “was that I had the idea for the New Riverside café. As soon as we opened the door, it was run by the people working there. It was a collective with workers’ self-management based on examples in Israel.” As part of our ministry, I felt we need a place where people could perform this hotbed of creative energy that wasn’t a bar. It was so good, not a bar.

“It had good food at an affordable price. You could always get a fee meal there if you needed it. They tried a ‘take what you need and pay what you could afford,’ but this turned out to be not a sustainable business model,” he said with a chuckle.

“There were enough bars. Here you could hang out and talk. My sacred hope was that it would become a center of political organizing, community building that I had always thought. I’ve been intrigued that the monastic movement in the church that began about the same time and the church became official – it became a social advantage to join the church,” Teska said.

Hall wrote a dissertation on liturgy and its functions as the voice of the community with a spiritual and social core. “That was a big part of this social change,” she said.

Teska said: “I wanted to be a street priest in a store front in the West Bank, but the church had no money.” Some people from different denominations, including the Newman Center, the Episcopal Center and “both kinds of Lutherans” pooled their resources for him to live on the West Bank at 605 Avenue.

“I learned over the summer was the development plans which were about to destroy the neighborhood and turn it into what is now the Cedar Square West – except it was going to take out the whole thing,” he said, explaining his activism in that process.

“It was really quite amazing,” Teska said. “A hundred years ago, they were hanging people for organizing unions. And now the American tradition was to transform society in the direction of peace and justice. Those things kind of converged in the 1960s so at its best the church was at the civil rights movement and the antiwar movement.”

Participants shared more laughter than solemnity as they recalled the spirit of the movement.

Teska said he has been in recovery for twelve years, but some folks shared amusing stories of altered consciousness in the 1960s. “Liturgy is intended to alter consciousness, singing is to do that,” he said.

The discussion was hosted by Preserve Historic Dinkytown, a nonprofit group that organized a reunion over the weekend. Check them out here.