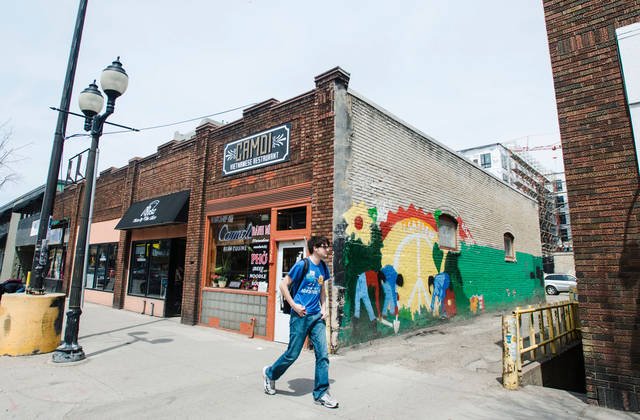 A man walks past Camdi Restaurant in Dinkytown on Tuesday. The restaurant is located in one of several properties, including Mesa Piza and Dinkytown Tattoo, included in the neighborhood's historic designation study. (Photo by Patricia Grover)

The city of Minneapolis began its Dinkytown historical designation study in April, but questions remain about the future of the area’s businesses and a potential $25 million hotel project.

The study will try to answer whether about 30 buildings in the business district — which has roots dating back to the late 1800s — are worth preserving. City staff say a final decision could come as late as 2015. Meanwhile, Doran Companies’ hotel project remains in flux, and business owners are wondering if they’ll be displaced by it.

Doran Companies CEO Kelly Doran said he will watch the process unfold but won’t build the six-story, 125- to 140-room hotel unless all of the pieces fall into place.

His contract to purchase the property housing Mesa Pizza, Camdi Restaurant and Dinkytown Tattoo expired “a couple weeks ago,” Doran said, but he may reacquire it if the city lets him tear down the building.

Jeffrey Myers owns the building and desperately wants to sell it. He’s labeled the situation a “complete injustice” and said the city originally told him the study would be completed by summer.

“It’s sad that the city can decide on something that you’ve spent your time, money and effort on and then come and change that plan quickly even though it’s your property,” he said.

Doran Companies inadvertently spurred the study in January, when it attempted to demolish buildings on the property that it had agreed to purchase from Myers and others. The city blocked the wrecking ball and mandated the study amid controversy over the area’s historical significance.

“If we could demolish the property, then we’d have renewed interest in it,” Doran said. “But if we can’t, probably not then.”

Camdi Restaurant has been in Dinkytown for nearly 30 years. Owner Camdi Phan said waiting months for a verdict is “troublesome.”

“It’s hard to leave the situation like that,” Phan said. “You don’t know what’s going to happen tomorrow. It’s very hard. I’d rather know right away in case we need to move.”

Minneapolis city planner Haila Maze said the city will begin the brunt of its work on the study this summer, with results to present for public review in the fall and winter. Maze said she hopes to present a final decision to the City Council in December.

The study will compare the potential historic buildings in the area against national designation standards, Maze said. City staff will gather all the data they can from official city records on Dinkytown, she said, as well as anecdotes from citizens.

“We’re trying to research everything we can,” Maze said.

Some past historic designation studies have had obvious conclusions from the start, Maze said, but the Dinkytown study is less clear.

“It’s one of the times where we could make a case either way,” Maze said.

Should the study find that the Dinkytown buildings aren’t historic, City Council members have said they will give Doran Companies authorization to demolish the building at 1319 Fourth St. SE.

But the owners of Camdi, Mesa Pizza and Dinkytown Tattoo say they have several years left on their current leases, granting them a major bargaining chip.

In these situations, Burris Law Offices owner Jonathan Burris, who has worked on similar cases before, said developers typically only have one option: a buyout.

Tenants’ willingness to negotiate will have a big impact on the hotel project, Doran said.

Dinkytown Tattoo owner Daniel Peace said he’s not interested in money. His business has made a name for itself in Dinkytown over seven years, he said.

“I just want [them] to go ahead and make it historical,” he said, “so that it would be over with.”

Phan said she would consider a buyout if the sum was large enough to reopen her restaurant elsewhere. But she said if she had her way, she would continue running her Vietnamese-Chinese eatery in its current location.

Mesa Pizza owner David Hathaway said he wants his Dinkytown store to stay put, but he thinks Myers won’t renew the lease because he wants to sell the building. If forced to relocate, Hathaway said he would do whatever he could to keep a franchise in Dinkytown.

Camdi said even if Doran backs out of the project, another developer will likely take his place. Many others have tried to buy the building before, she said.