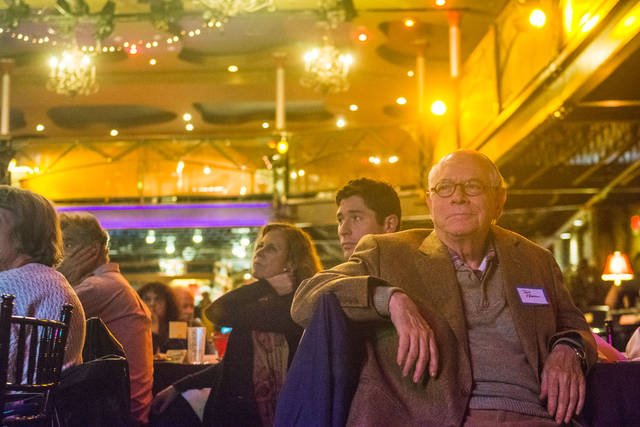 (Photo by Juliet Farmer) More than 100 people turned out to a “Dinkytown Reunion” on Nov. 23,2014, with many calling for the area to be deemed historic.

Don Olson saw Dinkytown through some of its most memorable social and political movements during the 1960s.

As Vietnam War protests flared up at colleges across the country, the former student activist, who dropped out in 1967 to focus on activism full time, was at the front lines of the University of Minnesota’s movement. Around the same time, a fast food restaurant called Red Barn was proposed in place of five businesses in the area. Olson supported a protest of the establishment that would become one of the most famous in Dinkytown’s history.

Olson was among more than 100 people with ties to the area who gathered Sunday in the Varsity Theater to share personal stories and to watch presentations about the district’s history. The gathering was put on partially in hopes of assisting the city of Minneapolis with its historical designation study of the area.

If city leaders decide the district qualifies as historic, it could preserve about 30 buildings.

Preserve Historic Dinkytown, an organization that resulted from the historical study’s announcement early last spring, held the “Dinkytown Reunion.” Though it wasn’t sponsored by the city, the event was held in part to help city planner Haila Maze gather physical and oral histories related to the area that she may not have had access to otherwise.

“It doesn’t simplify things to bring an oral history,” Maze said, “but it does sort of [add] a richer, deeper definition to the discussion.”

As short films and presentations played out on the theater’s stage, supporters of the area’s preservation reminisced at tables and couches.

Yearbooks from 1950 and 1960 were laid out among a timeline, historical photos and maps from the University dating back to the 1930s.

Nancy Smith was a student at the University from 1961 to 1966. Formerly a regular in Dinkytown’s various shops and its art scene, Smith attended Sunday’s event to support the area’s preservation.

“I guess I have a soft spot for Dinkytown, and I want to see that its integrity is maintained,” she said.

Later in life, Smith became friends with Laurie Savran, who also graduated from the University in 1966 and married Bill Savran — owner of Savran Bookstore, which had a location across the river in Cedar-Riverside.

Laurie Savran remembers frequenting various coffee shops in Dinkytown, like the Ten O’Clock Scholar. While she helped her then-husband run his business, she said, she also made lifelong friends.

The city’s study evaluates the four blocks some call “the heart of Dinkytown” from 1899 to 1971.

The first time period — the early 1900s — was selected because Dinkytown was part of the city’s early streetcar system and saw much development during that time, Maze said.

The second era — the 1950s through the 1970s — was a time of social change that Dinkytown exemplified at the time, she said.

Qdoba Mexican Grill owner and Dinkytown Business Alliance Vice President Randal Gast said he sees value in preserving some aspects of Dinkytown. But because he’s a newcomer compared to others in attendance Sunday, he doesn’t have the same personal connection to the district.

“This is important to a lot of people. They grew up here, and this is their history,” Gast said. “[But] everybody’s got a different opinion, you know. I didn’t get my first kiss here. Sometimes you have to let things go.”

Ward 3 Councilman Jacob Frey, who represents the district, spoke at the event about his goal to merge the city’s plans to increase Minneapolis’ population density while still maintaining its character.

“There are ways to hold onto the history and the beautiful architecture that we already have created while continuing to move forward,” Frey said. “You can have both.”

Maze said the event provided a few leads that could help with her study. She said there was a healthy balance between stories and artifacts that were useful and those that were simply interesting.

As she continues her study, Maze said she will be mindful of her objectivity and says she welcomes anyone who wants to share their thoughts on Dinkytown’s status.