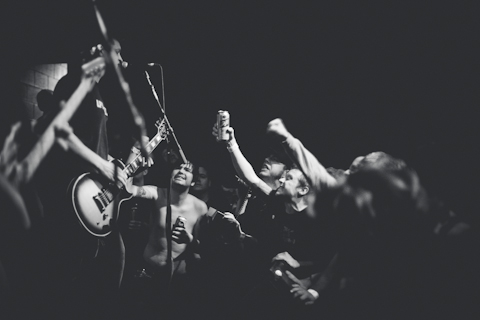 In 2004, at the Mad Planet in Milwaukee, was the last time I saw Dillinger Four (D4). My friend Chris and I thrashed to tracks from their albums Versus God and Situationist Comedy, belting choruses and stomping with the snare, until the first song of the encore when the bass drum head broke and D4 let out a collective shrug and were gone—the show unfinished, and for me three periods spilled from the back of their name like a wish.

On Saturday, May 12, it was eight years later and I’d recently moved to Minneapolis. I went down to meet Chris at the Greyhound station, each of us with more hair on our faces and less on top our heads than that long ago show. We barreled to Triple Rock where we saddled up at the bar and drained Surly tall boys in anticipation of the show billed, “The 13 Year, 10 Month, 2 Week and 5 Day Anniversary of the Release of ‘Midwestern Songs of the Americas.’” It promised to celebrate D4’s first full-length by playing the thing straight through—an album we counted among our favorites, an album that for us carried more memories of a couple kids trying to find their place in the world than any of our parents’ photo albums.

Dillinger Four picked up where they left off for us eight years ago. Loud and fast music a bar symphony of Lane’s explosive drumming, a jangling bass that sounded like Paddy was hammering steel girders rather than picking strings, Bill and Erik tearing at guitars, moving without seams between hook, tense-necked palm mute, and buzz chords. Dillinger Four’s songwriting—lyrics, structure, and titles—are brilliant and unique, but it’s their infectious live show that captures the punk ethos so perfectly and like too few bands flying that flag.

In their first song Saturday night, “O.K. F.M. D.O.A.,” D4 rallied the audience, “Witness a jaded town/got some champagne for a forty ounce frown,” then with sweat and volume demanded, “come on, kill the lights with troublemake/come on, smash the light and celebrate.” Erik, Bill, and Paddy sang with wide stances, as if they feared with their shouts and pleadings and vocal fury they might be blown over.

My high point was “Doublewhiskeycokenoice,” a rocker about coping with the “could-have-been’s” and the multi-directional pull of life with Jim Beam and friends. It’s one of those songs where I throw my arm around a friend and sing along, tumbler in the air, leaning back to yell at the ceiling when the words, downbeats, and cymbal crashes come in time. The way the guys attacked their instruments and mics I felt like we were in the same basement, sharing a handle and two-liter, singing along to a blasting stereo.

Another point of note for a different reason was Paddy’s dedication of “SHUT YOUR LITTLE TRAP, Inc.” to Tom Gabel, the singer/guitarist of Against Me! who came out as transgender in a recent Rolling Stone article. The song features the lines “paranoia and constant bigotry/a mind-set designed and provided just to hold me down.”

Dillinger Four delivered their lyrics with such urgency Saturday. It was like they believed so much in what they’d created they couldn’t wait for us to hear it. Despite the sarcastic banter their live shows are known for, there’s a Midwestern earnestness they share with like the Hold Steady! that I argue is present in the best music—current punk bands like OFF! and Propagandhi, as well as elder statesmen like Minor Threat, the Ramones, and Reagan Youth. Hell, it’s even why Bruce Springsteen puts on such a damn good show.

The band before Dillinger Four, Seattle’s Big Eyes, contrasted the praise I’ve heaped on so far. I have Big Eyes catchy two-track single “Back from the Moon” and like listening to it while driving around Northeast with the windows down in this early summer air. But when the Protools and anonymity were stripped away Saturday, Big Eyes performed like three individuals playing to a wall. The talented, but head-down drummer sat penned behind his kit. The bass player slumped with eyes glued to fingers holding root notes. The singer/guitarist letting the microphone do all the work. Whatever the reason for the disappointment it highlighted something core to musicianship.

For Dillinger Four their music isn’t about cool or a particular sound. It’s about awareness and confidence and belief in their art, which came out on stage in one giant metaphor when Paddy stripped off his clothes before their fourth song, “Portrait of the Artist as a Fucking Asshole,” exposing his chest tattoo, “How Much Art Can You Take?”

There were hiccups as happen on a drunken night, but what I’ll remember was Lane beating his way through the drums while Erik, Bill, and Paddy traded vocals within songs, verses, and lines, alternating their breathless, barking, and drinking-song revelry.

Of course it was great. There never was any question. After the lights went up and we walked into the warm night air Chris and I talked excitedly about all I’ve described. We’d been reminded of something we too often forget—that we belonged to this community. One that’s not perfect, but honest and enthusiastic and Midwestern.

We walked down Cedar Ave, and as the sweat evaporated from our faces we agreed—we had a hankering for double whiskey cokes, no ice. 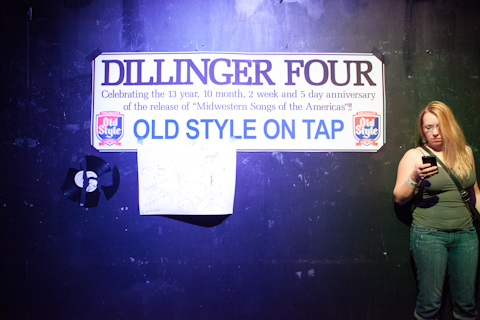 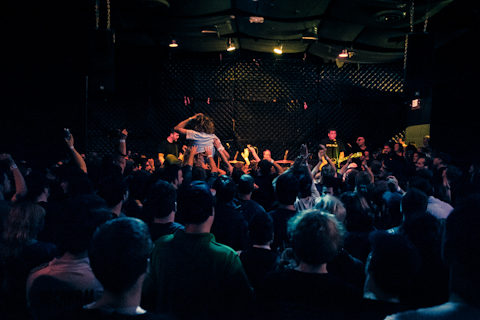 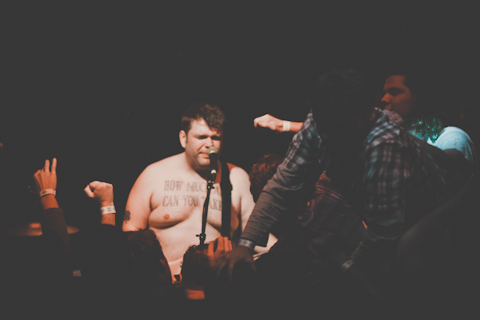 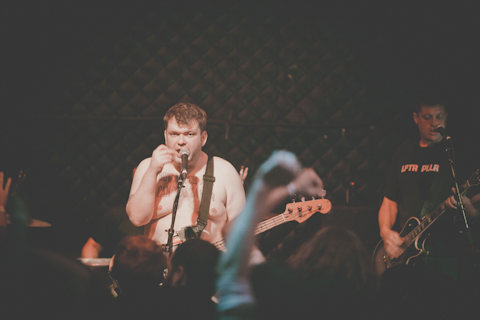 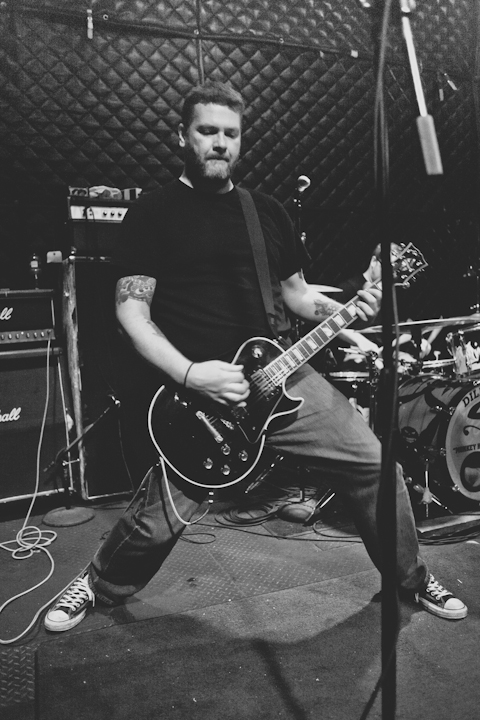 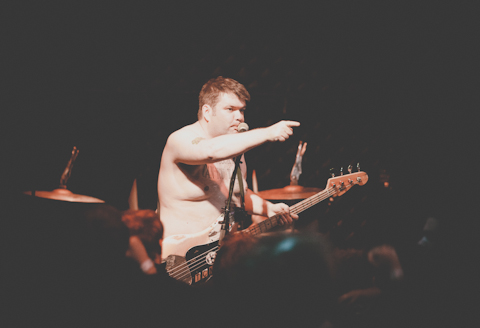 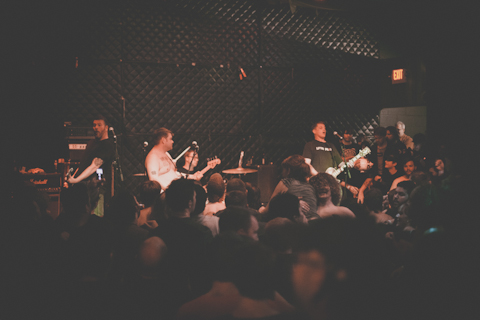 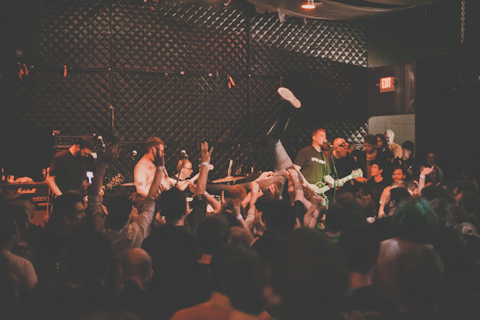 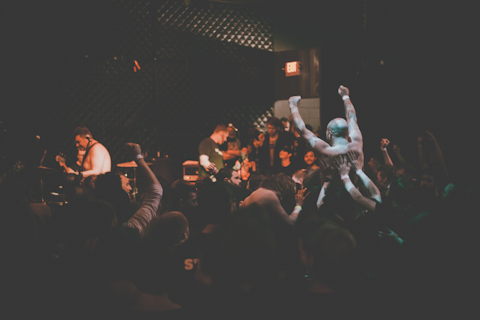 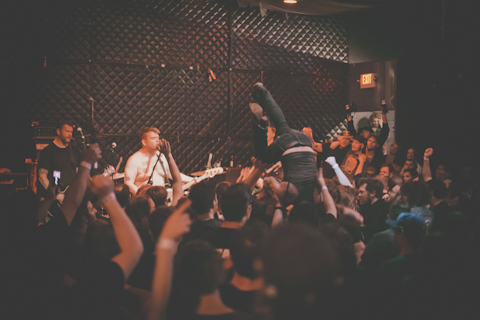 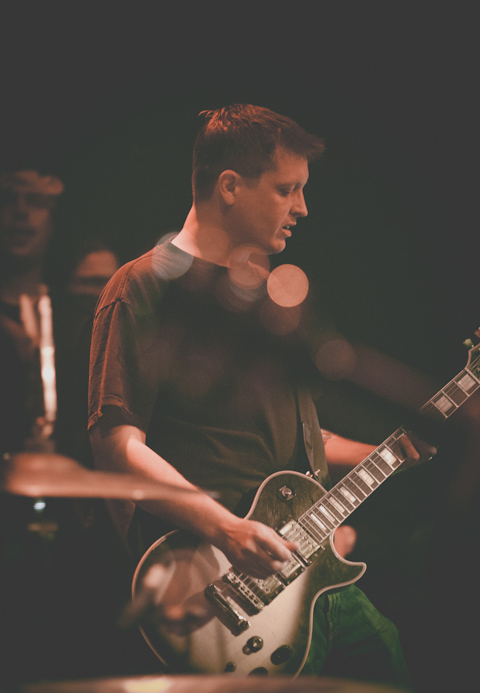 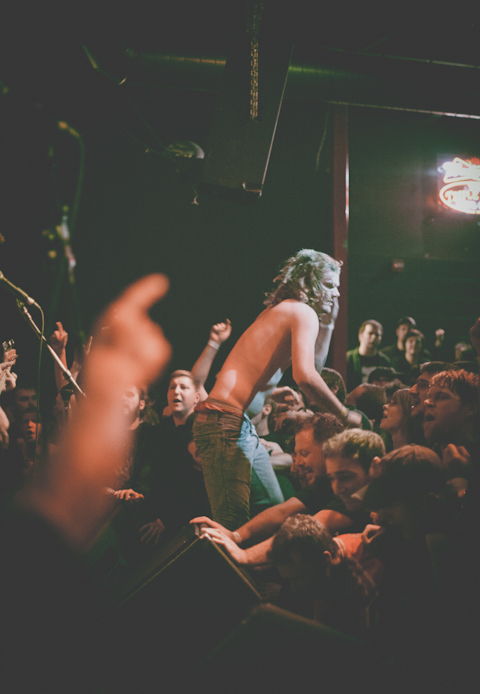 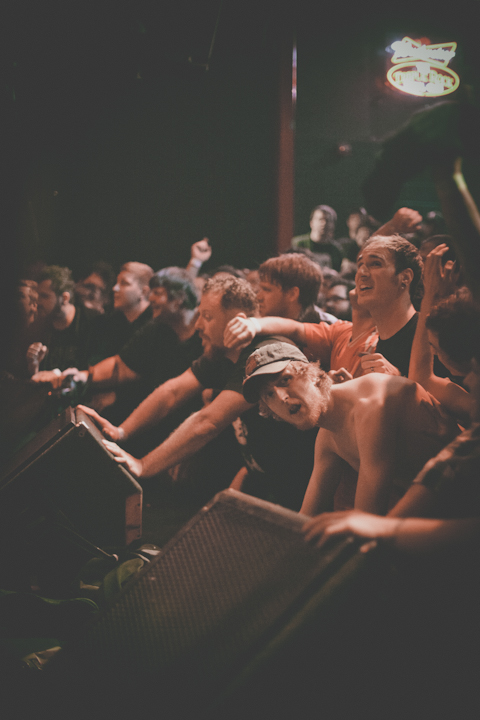 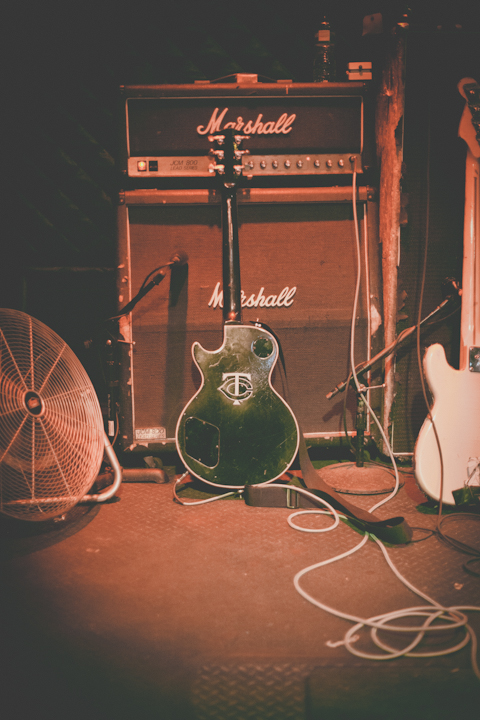