On April 25th I got a chance to tour the Garden Fresh Farms aquaponics facility in Maplewood, MN. Don’t know what aquaponics is? That’s ok, I’ll explain.

It is essentially sustainable agriculture using fish waste to fertilize plants grown indoors allowing multiple harvests per year. It is a partnership between the plants and the fish. The fish provide the fertilizer through their waste and they expel CO2 which is used by the plants. The plants consume the nitrates in the water, cleaning the water for the fish and providing fresh oxygen.

Garden Fresh Farms has a re-circulating aquaponics system. Everything is used and reused so there is no waste! They even feed waste plants to the fish. They plan to compost with worms and feed the excess worms to the fish. The fish they are growing are Tilapia and Trout, producing market ready Trout in one year!

Dave & DJ Roeser own Garden Fresh Farms which started in 2010 and now has 6 ½ employees (including their son—a biologist). Besides selling produce and fish, they started selling sprouts in the fall of 2011 and started selling shares as part of a Community Supported Agriculture (CSA) in April of this year. They also have canned goods: pickles, jams etc. 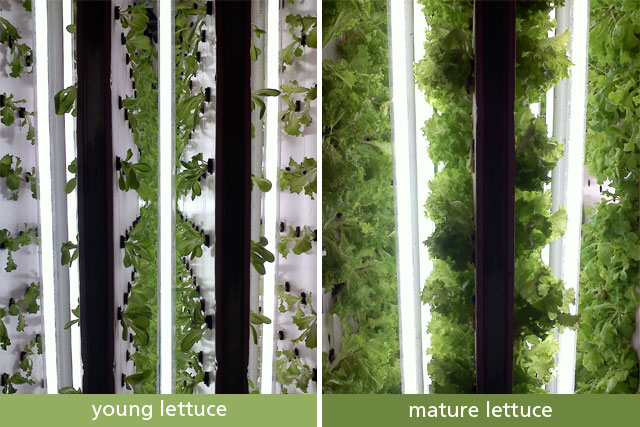 As if that wasn’t cool enough, they also utilize solar energy to power part of their operation! “Electricity is a commodity, and we have locked the first part of the usage at zero cost per kwh using solar,” said Dave Roeser.

They have a 10kW solar electric system on their roof, consisting of 44 American-made panels. Their system produces 12,500 kWh of electricity on average per year, which is the equivalent of coal carbon dioxide emissions of 25,000 pounds. Their solar array was installed in January of 2011.

Garden Fresh Farms also qualified for over $40,000 of rebates from Xcel Energy for their new lighting that they use to grow the plants.

Additionally, Garden Fresh Farms is capturing process heat to warm their building—like I said, they don’t waste anything! They fracture water for aeration which releases energy in the form of cooling the building where needed. The water picks up the heat and is sent to the Tilapia, which grow faster in water at 80-85 degrees. Dave continues, “We ‘wall wash’ the growing area with fans to reduce mildew and send the heat generated by the lights to the rest of the building”. The generator has a heat exchanger to warm the fish water and cool the motor.

Metro CERT will be hosting a tour of Garden Fresh Farms the morning of June 20th from 1pm to 3pm. We have limited space so PLEASE register. There will be tours every 15 minutes (and lemonade and cookies, too).