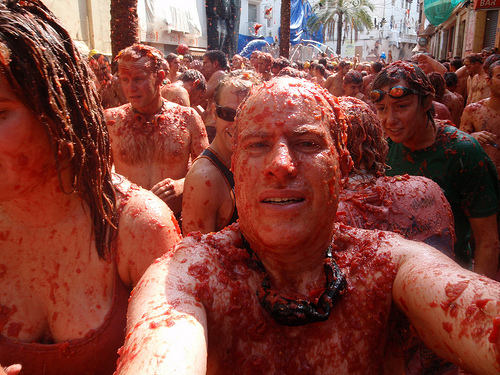 The Midwest Tomato Fest does not have its origins in Italy, as one might think, and it doesn’t involve all the pizza one can eat, though I rather think it could be reinvented to include at least a little pizza….

Mike Kann, Hillel’s Engagement Associate, first learned about the Midwest Tomato Fest that will take place in Afton Alps this coming Sunday, July 31st through a social networking site called Meetup.com. Any young person looking for a fun thing to do, a way to meet new people, and ways to spice up their summer, can’t go wrong to check out this festival!

Mike has limited experience with tomatoes in the first place, eating them only in pizza sauce form, or on a Big 10 Sub Sandwich. Why, then, choose this particular festival, when it is suggested that participants wear clothes they never expect to wear again?! And nowhere have I seen any mention of pizza!

Knowing Mike’s limited wardrobe, and how he delays doing laundry for as long as possible on a regular basis, you can imagine my curiosity. Why this festival? To be fair, I discovered Mike’s passion for Groupon specials this summer. He took some flying lessons, learned how to ride a motorcycle and is currently sporting a vintage red ’71 Honda 350 Scrambler – so maybe it was the red color of the tomatoes that drew him in. Or just the love of a bargain – he signed up to be a participant with a 50% off Groupon, so I am told.

I like tomatoes myself, so I originally thought I could ask Mike to grab me a new variety of tomato plant, or pick up a new recipe or two and I would spring for making a staff dish to share on one of these lazy summer days. What was I thinking? Upon closer exploration, the Midwest Tomato Fest would satisfy none of my urgings to expand my culinary horizons or my garden. Imagine my frustration, to learn that rather than learning new dishes to create with this summer delicacy, this festival is all about throwing tomatoes! A massive food fight!

Now I am not one for wasting anything, let alone good, wholesome, nourishing food, and tomatoes are right up there on my list of summer favorites. Dismayed at my findings, I decided I had better look further. No one who works for Hillel could be so wasteful. Especially not the person in charge of our community service initiatives, which include feeding the hungry.

Here’s what I found:

Typically held on the last Wednesday in August, between 11am and 1pm in Buñol, a village outside of Valencia, Spain, this festival, now called La Tomatina, found its beginnings in 1945. One could call it a ‘tomato throwing free-for-all’, but the story of how it began makes it a bit more interesting.

I found several versions of the story, but here’s the one I like the best. If you want to see all the options and choose your favorites, just Google ‘La Tomatina’ and I am sure you will find plenty of reading material. It seems there was an annual parade that made its way through the streets of the village, though I have not managed to find out what exactly the original festival was celebrating. Perhaps, as it took place at the end of August, it was merely a celebration of summer. Parade participants were dressed in elaborate costumes with big heads (I’m picturing giant bobble heads), and they wobbled down the street all in fun and in a festive mood. So far, it seems safe enough, and with giant bobble heads, it’s hard to imagine people were eating anything, much less tomatoes.

The story goes that a few youngsters were eager to join the parade, and being young and impatient, they pushed their way into the center of things, rather than maneuvering carefully or waiting to enter at a more strategic point. One of the parade participants in extravagant and probably somewhat precarious costume, was accidentally toppled over or inadvertently pushed into a vegetable stand that had the misfortune of being right on the parade route. Most likely embarrassed, and a bit angry, the fallen man crawled out from his big-headed costume and started swinging and punching at the boys. What choice did they have, but to grab some tomatoes from the poor vegetable vendor’s cart and start throwing them at the riled-up man. Eventually, the police came and broke up the clash.

I guess the boys enjoyed themselves. The following year when the parade came down the streets, they were ready. Stocked with their own tomatoes, they snuck through the crowd and waited for the big headed costumed participants, and once they spotted them, the tomatoes were airborne! Despite their best efforts, the local council was unable to ban the event. The tradition grew year after year until today the tiny town hosts the world’s largest tomato fight.

Still, I wonder, where do they get all those tomatoes? I haven’t changed my mind about how I feel about being wasteful. There is a less expensive tomato that doesn’t taste that good, from a place called Extremadura. Since 1980 they have been growing these tomatoes specifically for this festival and deliver them right to the parade route by the truckload. Who does that? Grow an inferior tomato for throwing around rather than for eating?

I was certainly happy to learn that at least here in Minnesota, home of the first La Tomatina in the US, things are done with no less thought to the fun, but with significantly more emphasis on the purpose of food.

“We understand that this event seems wasteful, but in fact it is resourceful. Here is how: There are many farmers that grow tomatoes around the United States. After every season there are tomatoes that spoil, are inedible, and therefore cannot be sold or given away to be consumed. Naturally, inedible tomatoes = waste. We figure if these tomatoes cannot be marketed for human consumption, we will collect the “waste” from farmers and throw an event that will raise food waste awareness.

This event intends to be an annual festival for Midwest states that will help contribute to local economies. In addition, we will donate part of the proceeds to fight hunger to dedicated organizations. This year, 2011, we are donating to “Fight Hunger MN” and Dorothy Day so they may purchase fresh and edible food for those in need. Instead of the tomatoes actually ending up as waste, we are recycling the tomatoes. We would never destroy perfectly good tomatoes.”

Satisfies my concerns in a big way!!

And for Mike, this made a big difference too. According to him, “One of the main values of Judaism – Tikkun Olam (Social Justice) is the concept of giving back to the community, through volunteering or financially supporting an important cause.” Because a portion of the ticket proceeds for the event will go to “Fight Hunger MN”, Mike decided he could give up an old pair of shorts and a torn t-shirt for the cause. Join him this Sunday – but don’t forget your goggles! (Eds note: the Fest is still looking for volunteers, and you can get a free ticket if you help out!)

And for those of you who still want to expand your culinary skills, here are some great Jewish tomato recipes I found online. Don’t use the leftover tomatoes from the festival. Head to your closest farmer’s market where I am sure you will find a great tomato harvest, and have a cooking frenzy… But no throwing of tomatoes allowed in the kitchen!

Even if you can’t attend the festival, celebrate anyway!

Prepare a Spanish recipe with tomatoes.

This is a guest post by Sarah Routman, Executive Director of Hillel at the UofM, tomato lover and proud supporter of the values of choosing to reduce waste, reuse, and recycle (even tomatoes!)