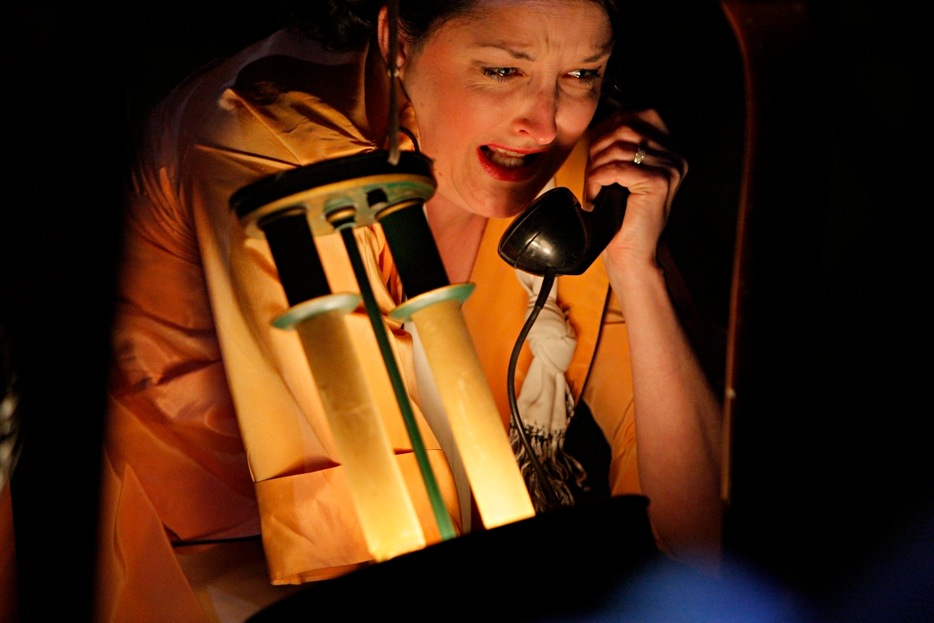 As any American who takes in an evening of opera can vouch, there’s something a bit out of place about the art form. I’m not talking about the need for English supertitles (although a little reading never hurt anyone). And obese strangers rambling about what they love or hate has become startlingly commonplace (thanks, YouTube). No, I’m talking about a long-standing practice that can make any Yankee wrinkle his or her nose before the orchestra even plays a note: the damn program.

You know, that thing the ushers give you as you take your seat. There’s always a plot summary front and center that gives the whole story away. In any other narrative arena, this is outright sacrilege. America’s kink with plot twists has even penetrated video games, like 2008’s acclaimed Braid where players realize only in the last act they’ve been playing as the enemy the whole time.

Magicians may believe that the fun is in not knowing, but The Jungle Theater’s Dial M for Murder successfully makes the case for knowing how the show ends. Thar be spoilers below, but that’s the point.

In Dial M, playwright Frederick Knott might have the most successful attempt of meta-analysis of the murder mystery genre (characters who talk about a who-done-it while living a who-done-it)…and it’s still pretty ham-fisted. The frayed American writer Max Halliday shares his views about writing for a popular audience or the by-the-numbers construction of contemporary noir, but that only amounts to some self-referential literary grandstanding. Knott’s greatest strength is writing blackmail and exploitation, not romance, humor, or even human drama. Thankfully, Director Bain Boehlke knows this, and the play glides over half-baked tensions of infidelity or injustice in favor of the real meat of the script.

Firstly, the production plays to all the Jungle’s standard strengths. Audiences are treated to a fantastically detailed set of a 1950s London flat, courtesy of Boehlke, John Clark Donahue, and John Novak. The set design also masks the true depth of the Jungle stage, and the draw distance that is revealed the few times the front door is swung fully open is considerable. Trotting around onstage is an equally impressive cast, bookmarked by Michael Booth’s steely Tony Wendice and Gary Briggle as the sharp-eyed-but-sometimes-thick-skulled Inspector Hubbard.

Similar to how a second viewing of M. Night Shyamalan’s The Sixth Sense reveals the film’s true craft, knowing how Dial M ends actually displays the Jungle Theatre’s commendable execution of it. The play’s crucial second scene between Tony Wendice and Captain Lesgate is navigated particularly well, and knowing the demands of the dialogue beforehand—equal parts exposition, deception, revelation, and status reversal—allows audiences to marvel at the patient and nuanced performances therein. Barry Browning’s lighting design also receives new recognitions, creating the perfect atmosphere of “stage noir” to deliciously foreshadow all the right moments. An uninitiated audience may still be reeling in the moments after the foiled murder attempt and could miss Browning’s simple-genius use of a toppled desk lamp. Other illuminations bubble subtly through Boehlke’s direction, like the choreography of the main door which forces audiences to focus on Wendice’s reaction to an unexpected guest, or the critical pause during the attempted murder where Lesgate replaces the latchkey too early and unknowingly jeopardizes Wendice’s master plan. Moments like these are peppered throughout the production; moments which are ultimately unimportant if you miss them (for, say, the uninitiated), but a heck of a lot of fun if you don’t.

And perhaps that is the litmus test for The Jungle Theater’s Dial M for Murder: a show that actually improves with age and familiarity. It’s a production that features a fantastic cat-and-mouse puzzle for the new, and a deft and thoughtful execution for repeat offenders. Just, uh, keep track of your house keys in that dark theater.