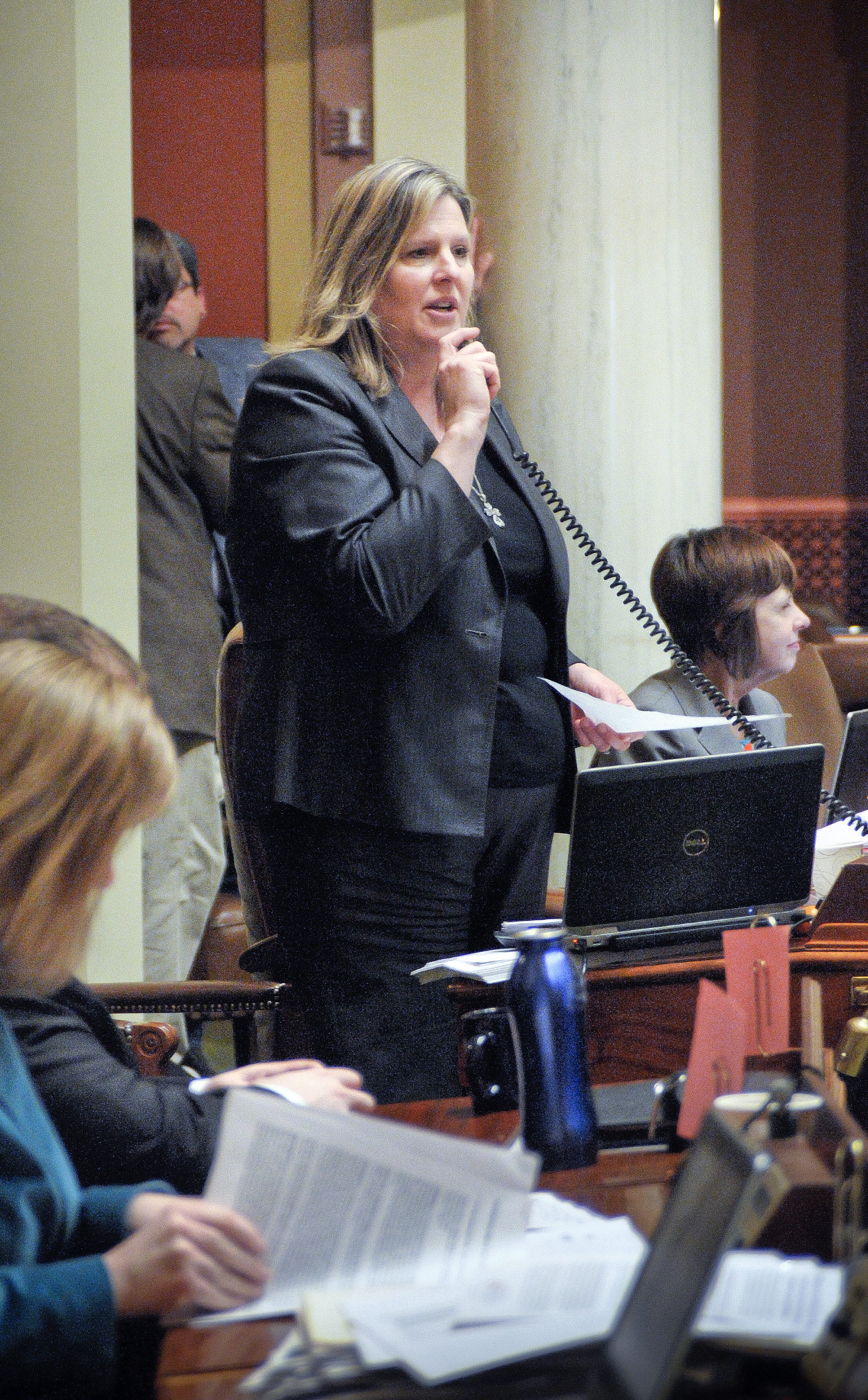 The House DFL has a lot riding on the omnibus tax bill – it’s the link to funding their session priorities and fulfilling campaign promises.

“The revenue in the tax bill, allows us to balance our budget, it allows us to pay back our schools, and it allows us to invest in our future – like job creation and stronger schools,” House Majority Leader Erin Murphy (DFL-St. Paul) said during a media briefing before the bill’s consideration on the House floor Wednesday.

The nearly $2.6 billion revenue-raising plan, while mostly devoid of any new sales taxes, would create a new fourth-tier income tax rate; beef up alcohol and cigarette taxes; and close some corporate loopholes.

HF677 is sponsored by Rep. Ann Lenczewski (DFL-Bloomington), chair of the House Taxes Committee. There were few amendments proposed or adopted, but Rep. Rod Hamilton (R-Mountain Lake) was successful with his that would help southwestern Minnesota cities hit recently by a late-winter ice storm. His provision would allow for cities deemed a disaster area to receive their December 2013 local government aid payment with their July payment.

The lack of amendments did not stifle what was a nearly nine-hour debate, before the House passed the bill 69-64. It now moves to the Senate where Sen. Rod Skoe (DFL-Clearbrook) is the sponsor.

DFLers say the tax bill will pay back the $850 million owed to the schools; erase the state’s projected $627 million deficit; and pay for a property tax relief package through the homestead credit refund. It will also make changes to the renter’s credit program, and the local government aid formula seen as a benefit to more cities.

Lenczewski said the bill brings structural balance to the state’s budget without relying on “gimmicks.” Rep. Erik Simonson (DFL-Duluth) said this comes at a cost. “Nobody wants to raise taxes. … But it has to happen. We are trying to correct a problem that has been going on for 10 years. … We are investing in Minnesota and we are doing so fairly.”

Republicans called the bill a “war on workers.”

“This is going to chase the wealth out of our state. We are exporting our wealth and importing our poverty. The war on work has to stop. We are spending the people’s money. …. We are forcing them (to pay) more against their will, and they are leaving our state in response,” said Rep. Steve Drazkowski (R-Mazeppa).

“You’ve opened the floodgates on increasing taxes and regulations. That is irresponsible. You all really don’t seem to care how hard Minnesotans work. … I think of all the people working hard, raising their families … yet with no thought you are going to raise the taxes on hard working Minnesotans — $2.7 billion — the largest in 30 years. Tax, tax, tax,” he said.

The projected new revenue in the bill would include:

Individuals with taxable income greater than $400,000 per year as joint filers would fall into the new fourth-tier tax rate. On top of the new 8.49 percent rate, joint filers with taxable income greater than $500,000 per year would also see a 4 percent surcharge for each year in the next biennium to allow for repayment of the $854 million borrowed from the schools over the years to help balance the state’s budget. The surcharge would blink off once the debt has been paid.

Taxes on a pack of cigarettes would increase $1.60. Excise taxes for liquor, beer and wine would be raised as well. The amount on a 12-ounce glass of beer would be about 7 cents, according to DFL figures.

Except for provisions dealing with sales taxes for online purchases, there are no new sales tax provisions in the bill. However, the bill contains the new memorabilia tax, and a tax on stadium and arena suites. Although going into the state’s General Fund, the money from these two revenue raisers would be diverted to help fund the state’s portion of the stadium to house the Minnesota Vikings.

The bill would align the state to some popular federal income tax reductions and credits, including deductions for higher education tuition; mortgage insurance premiums; and classroom expenses for teachers. It would also provide tax reductions through the standard deduction for married filers; increase phase-out threshold for the student loan interest deductions and various provisions accelerating depreciation and expensing of business property.

The new tax revenue would help pay for a property tax relief package through the homestead credit refund; a change to the renter’s credit program; and local government aid increases.

The bill would provide some help for veterans by expanding the eligibility for the tax credit for past military service to individuals who receive a pension or retirement pay for service in the military. Additionally, a qualified employer would be able to claim a credit for each disabled or unemployed veteran hired, under certain conditions. Active duty military homeowners would have a six-month grace period to pay their property taxes.

While not as much as initially proposed, the Mayo Clinic’s Destination Medical Center proposal would see some public assistance with its effort to help improve the city of Rochester’s infrastructure.

The bill would direct the city to create a nonprofit corporation to help develop the plan and to finance the development. The maximum amount of general state aid would be $338 million, with no more than $30 million per year. In addition, $119 million of funding for public transit for the project would be funded with local taxes.

Other cities would receive economic help through extension of sales taxes, imposition of lodging taxes or changes to tax-increment financing districts. Some projects include the proposed expansion to the Mall of America in Bloomington and a new building for 3M in Maplewood.

The Target Center in Minneapolis and the new St. Paul ballpark would benefit through a property tax exemption.

An upfront exemption for capital equipment purchases, a change the business community has been seeking, would be provided. The bill would also beef up the state’s Angel Investor Tax Credit and Historic Rehabilitation Tax Credit programs.

Other taxes and surcharges

The Iron Range has its own unique set of taxes set around the mining industry and could see significant tax increases. The bill would double the occupation tax, and there is a production tax increase proposed as well.

It would also increase the rate of the taconite production tax by 5 cents per ton and increase the match requirement for companies receiving distribution from the taconite economic development fund from 50 percent to an equal match.

This portion of the bill would also impose a new 55-cent per cubic yard tax on silica sand mining and a 3 percent tax on processing the sand.