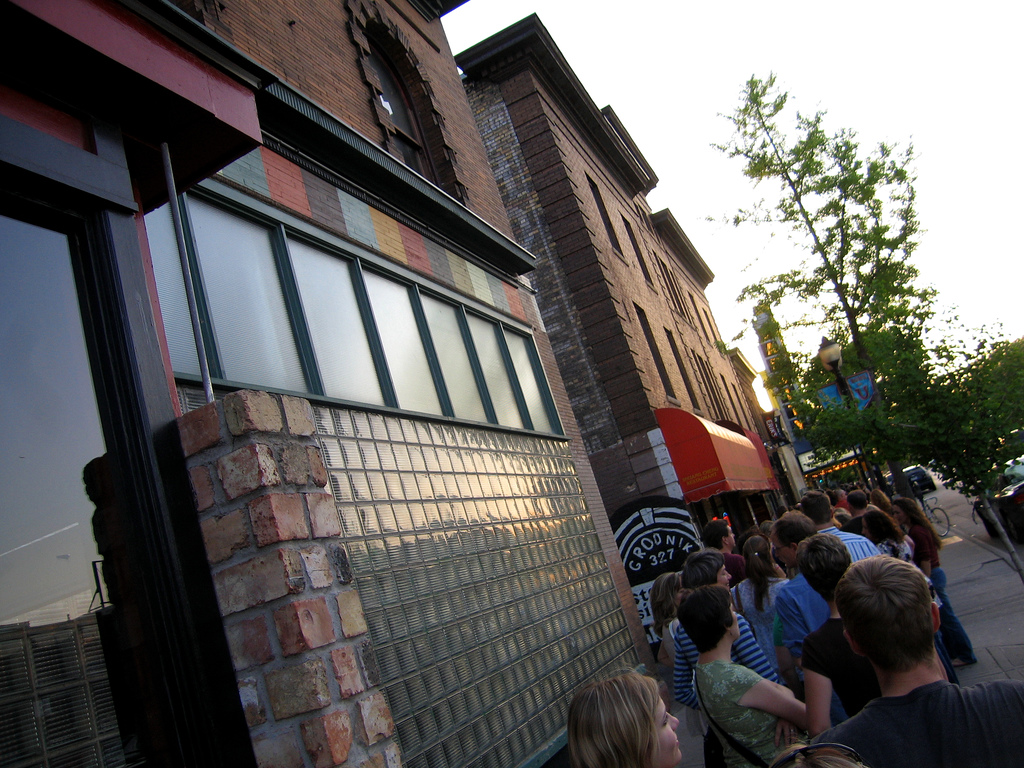 Music fans wait in line to see a concert at the Varsity Theater. Photo by Drew Garaets (Creative Commons).

Ninth in a ten-part series. Previously, part 8: Memories and hopes.

The Opus development could be the seed of renewal, said Tom Dale, a.k.a. Tom the Tailor, whose leather shop started above Gray’s Drug in 1971. He now works in his home at 1052 19th Avenue.

“Unfortunately, they’re bringing down more history in the process,” Dale said. “The Book House along with the Podium and Al’s Breakfast are beloved by the community.”

The “most storied and legendary” places should be preserved, Dale said, “but I just think Dinkytown has been looking for ways to exist ever since students got cars and moved off campus.”

“The funny thing is that part of me wants to go back to Dinkytown,” Dale said. “I dream that I found a spot that I could afford and go back there, but I still have the customers I had in Dinkytown.”

“Being upstairs of the drug store was like being at the Vatican,” he said. “Everyone knew where it was. You could just say you were in Dinkytown above Gray’s Drug and you didn’t need to give directions. It was a landmark, an institution destination.”

“Making the property more desirable may force many more businesses to close, but maybe there’s more opportunities for different types of business. I tend to look at the glass as half full, especially when things are inevitable,” Dale said.

Keeping the Varsity Theater, Vescio’s restaurant, and Al’s Breakfast would be important, Dale said. “Fast Eddie’s is a really good shoe repair, often listed as the best in the city. There is a place called Magus Books downstairs next to the Post Office.

“In spite of all the gentrification in Dinkytown, there are still one-of-a-kind businesses tucked away there,” Dale said.

Dale recalls stores like Everyday People with used clothing that prospered despite the high rent and, he said, Bruegger’s introduced bagels to Minneapolis when the East Coast chain opened a Dinkytown location.

The Refinery Salon is where Campus Cobbler used to be in the building that once housed the Dinkytown Dayton’s store.

Jo Radzwill, co-chairwoman of the MHNA land-use committee, said one of the mixed-use developers should consider making room for a new Southeast Library. Problems of timing have made it difficult to bring Hennepin County and the developers together, however.

Next, part 10: “If they lay one finger on Al’s Breakfast, I’ll be at the barricades”