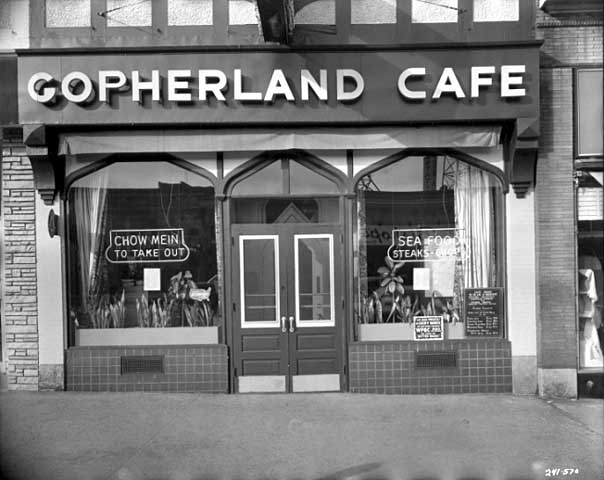 Many people, newcomers and old-timers, have ideas about what Dinkytown should become.

“It would be hard to say what to keep. I think there is a community,” long-time resident Walter Johnson said of Dinkytown. “I think the business people have a community there but those kinds of things come and go—develop and disappear—I don’t think anything like that is permanent.”

“As far as I’m concerned,” said Walter Johnson, “I’d rather see more of a general shopping area than what it now. I think it’s patterned; it’s changed by the changing clientele. There aren’t as many families that live close to it and there are more students. And the students don’t do a butcher shop or a bakery.”

“We certainly use the Post Office and Autographics. We use Fast Eddie’s [shoe repair] so there are some things we use in Dinkytown, but we’re not doing our shopping there any more.”

“There was a dry cleaner I used that was run by a man and his wife—they were really old. They were sort of like grandparents to me,” he said. They were next to Perine’s bookstore, which was on the ground floor of the building that houses Annie’s Parlour. A church once stood where the library bar is kitty corner from the Southeast Library.

O’Hearn also recalls an earlier Dinkytown, which included Dayton’s. “Dayton’s had two restaurants—the Tent upstairs and the Dungeon downstairs—and they were both nice restaurants. I think a Grandpa Dayton wanted that store to be there. That was there a long time. Very nice.”

Mrs. Smith’s Tea Room was kitty corner from the St. Lawrence rectory at Fifth Street and 12th Avenue. “I was there many times. They had very good chicken pot pie,” said O’Hearn, who attended St. Lawrence Elementary School next to the high school. Another restaurant, Mrs. Bryan’s Tea Room, was nearby at 1005 University Ave.

Many of her high school and college friends found jobs in the restaurants and retail stores in Dinkytown.

She said she misses the Bridge Café, which was where CVS is now, where she went with friends after school. She recalls Bridgeman’s on the corner where Potbelly is, Simms Hardware at 411 14th Avenue, Schaak Electronics nearby, and the Dinkytown Dime next to Gray’s Drug.

Schafer Brothers had a grocery store and meat market at 405 14th Ave. Ortie’s Corn Shop sold popcorn near the Varsity Theater. A photographic studio and a camera and record shop were also in that block, according to advertisements in her high school yearbook.

Like many long-time residents, O’Hearn remembers the Red Barn incident from the 1970s when students and residents staged a sit-in to prevent a developer from taking out a popular restaurant to replace it with a fast-food franchise. “It would have added commotion and traffic to the site where the Post Office is now,” she said.

Pankake, who came to the University of Minnesota in 1960, misses the music scene and bookstores.

“The flavor of Dinkytown is a effervescence in the air you have that by having specific things, like a grocery store. Little small businesses are what add to desirability of Dinkytown—the purpose for going there.”

“The Podium draws people from all around—people who live in a few miles will stay for things besides the Podium. People used to drive to Dinkytown to see the Needle Doctor, Jerry Raskin. Now he is somewhere else that you need a car to go to,” Pankake said.

If the new apartment buildings are for students, they may draw a transient population that may not be as good for business, she said.

“Meyer’s was a terrific grocery store,” she said about the store where the Dinkytown Wine and Spirits is now at 1412 Fifth Street.

Meyer’s had a butcher shop and free delivery, Pankake said. She shopped on her way home from the University, and by the time she walked home, the groceries would arrive about the same time as she did.

Next, part 9: Seeds of renewal