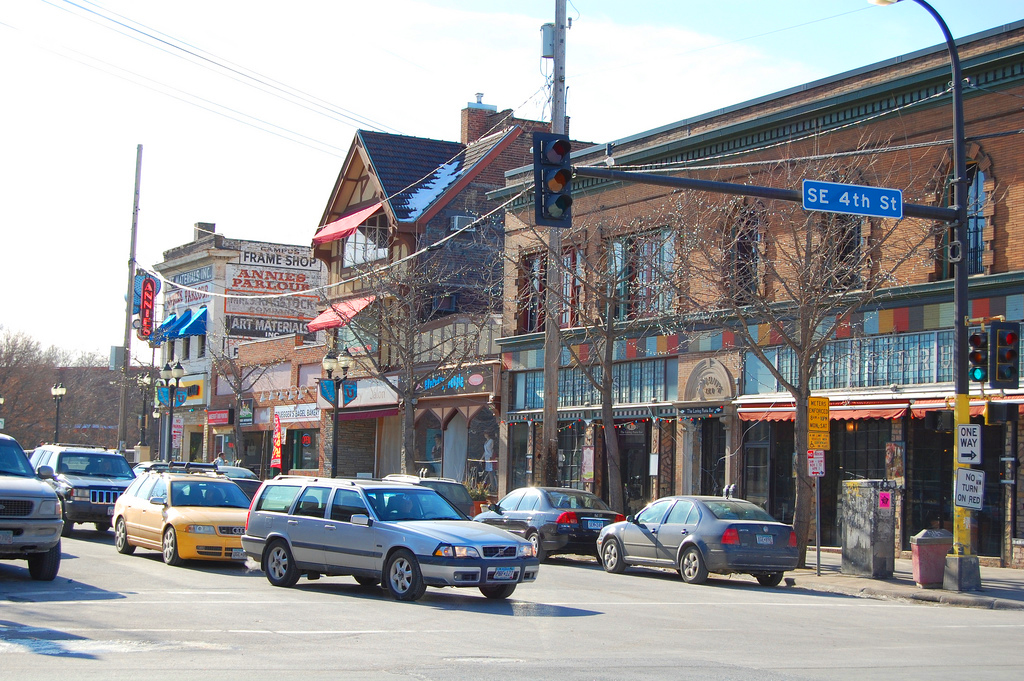 Where did the name Dinkytown come from? That depends on whom you ask. Some have said it came from the appearance of a dinky town; another suggested it came form the name of the Dinkytown Dime, a long-standing dime store in the area. Others say a switch engine in the adjacent rail yards was called a Dinky and the workers stopped for lunch and other breaks. Still others say a streetcar through the area was nicknamed the Dinky.

Skott Johnson expressed concern that new buildings may not be as durable as the ones being torn down. The University of Minnesota is building a new “super dorm” at 17th and University avenues that’s “absolutely beautiful brick and stone.”

“Our new buildings are not much to look at by comparison. The University is building for a hundred years; these buildings are going up for 15 to 20 years for a return on investment,” he said. “These new ones aren’t going to hold up so long.”

Dinkytown has some older stone and brick buildings, such as Dinkydale, which houses several businesses. “We don’t want them replaced by a prefab front. We don’t want to see the strip-mall look that’s going up all over town.”

He named many businesses and owners who have been around for years, and he praised the Loring Café owner for preserving the exterior integrity of the Gray’s Drug store and the Varsity Theatre.

Some are concerned about whether businesses can survive a change in Dinkytown’s parking capacity—even just a temporary change.

“If the Opus development and the new UTEC buildings are under construction at the same time, we could have zero surface parking in Dinkytown for several years,” said Skott Johnson, who compared the situation to the loss of business when three bridges were replaced in the 1990s.

“People come here to our store from all over the Midwest,” he said. “If we have no parking, we have no business.”

Nonetheless, Chris Meyer, who joined the MHNA board as its student representative, said Dinkytown should eliminate much of the parking it already has.

“Dinkytown should be an urban, pedestrian-oriented place. They should get rid of at least one lane of curb parking on Fourth Street, and use that space to complete the missing link for the bike lane there, and expand the sidewalk space,” he said.

“If we get to that point were we have zero parking,” Skott Johnson said, “that will be difficult for our businesses.”

“We buy most of our books from customers who bring their books to us. We load books in the front and the back – it makes a big difference to us. We pay for the first hour of our customers’ parking. They have to spend something, but it has been very important for our business to have that kind of access.”

“I’m worried about the lack of parking that this might end up producing,” long-term resident Walter Johnson said. “Because I think they’re going to use the lot behind Hanson’s and the lot next to Marshall. I don’t see where customers for the little shops that are now in Dinkytown are going to park.”

“There’s a point to the idea of making the place more pedestrian- and bicycle- friendly,” he said, “but I don’t think most people ride bicycles all year around. It always has been a bicycle place. I certainly used it that way for many years.”

Many people from outside the area drive to Dinkytown, he said, for dining at Kafé421 and the Shuang Cheng restaurant in Dinkydale. “We had a friend visiting from Florida and the one thing he wanted to do was go to that Chinese restaurant. I don’t know how he heard about it,” Walter Johnson said.

“It grieves me terribly that Kafé421 [at 421 14th Avenue] isn’t going to have parking, because it’s a nice restaurant. There are some groups of people who go through Dinkytown who aren’t young. I’m also interested in parking for the church at 13th and University.”

Most of Skott Johnson’s Autographics business comes from other Dinkytown stores and University departments.

Brett Naylor, who owns the building with several businesses east of the Varsity Theater, has told tenants, including Autographics, that he might sell their aging building if the opportunity arises, Skott Johnson said. Naylor developed the apartment building at 1301 University Avenue that houses the Purple Onion coffeehouse and café.

Dinkytown is a special-service district that can tax itself for special projects, like snow removal and holiday lighting. The four-block district was expanded to take in DinkyDome and UTEC.

DBA membership ranges from 40 to 65 members, Skott Johnson said. “I’ll probably see 85 by the end of the year. We had close to 135 at one time when UTEC was going strong. Many businesses aren’t on the street level and they do their business online.”

Next, part 8: Memories and hopes.