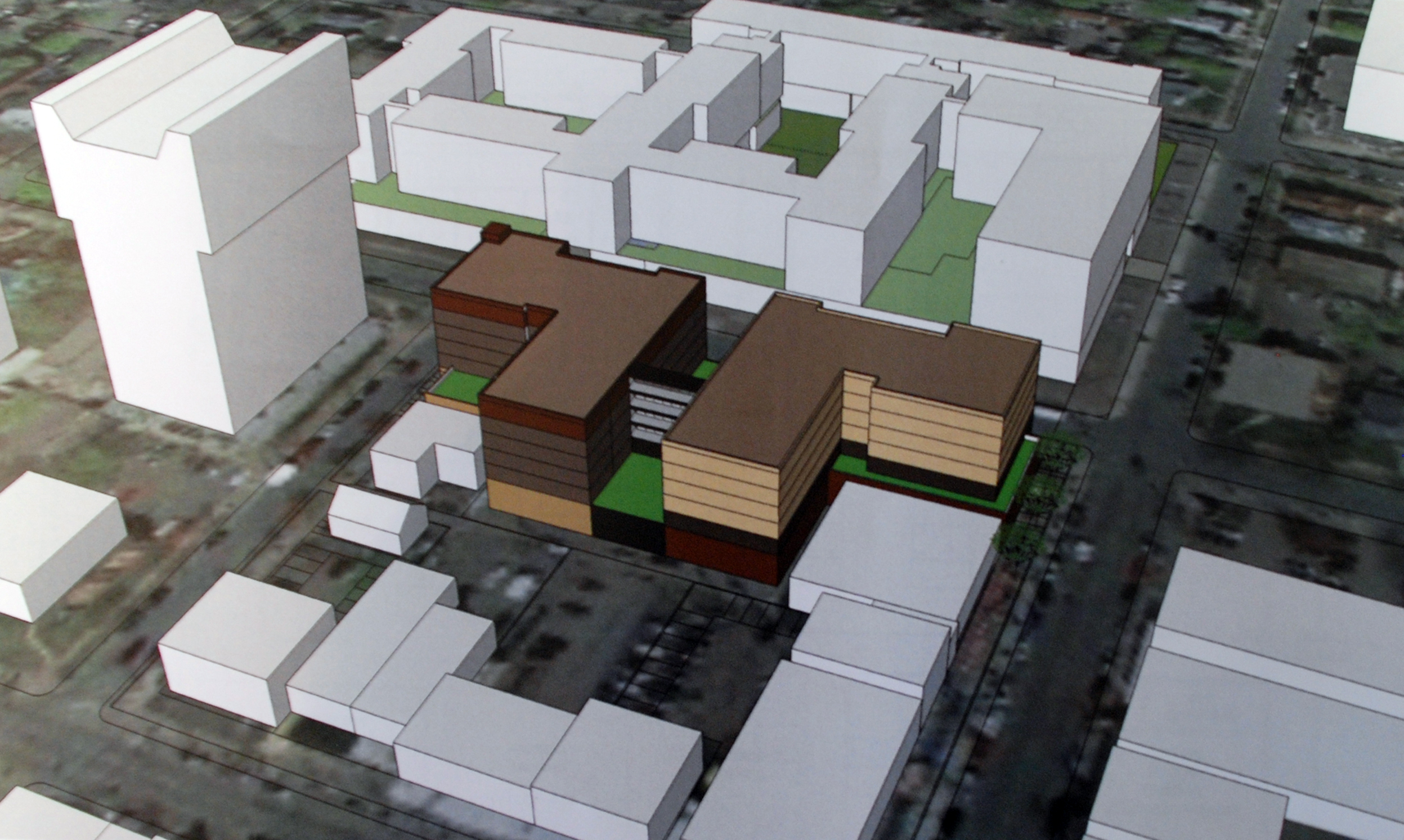 This plan by Opus shows the scale of the proposed project.

Second in a ten-part series. Previously, part 1: “There’s a nice vibe; it’d be easy to mess that up”

The city plan classifies Dinkytown as an activity center, like Stadium Village and Uptown: a dense, busy, active business area.

“The unique character of Dinkytown is in some ways intangible,” says Haila R. Maze, city planner whose responsibilities include Dinkytown. “It’s an urban small-scale commercial space that has managed to survive over the years. Having survived is a major accomplishment.”

Maze said Dinkytown is a human-scale, eclectic mix of businesses with some local unique businesses. “I hope that there are ways to do infill development that can change it but keep what people value about it,” she said in a recent interview.

“We should keep being a place where something is interesting and happening, but we don’t want it to be so successful that big players come and squash it,” Maze said.

Dinkytown is threatened because of its success; some small businesses have succeeded and new developers seem to find it lucrative. Many other neighborhoods would like to have developers lining up to buy their land, she said.

“Dinkytown is a brand that students know,” Maze said. “If a building or development is close enough, the owners will market it as a Dinkytown apartment.”

Matt Rauenhorst, developer for Opus, confirmed his company’s interest in the block but said their plans are too preliminary to discuss with any specificity.

“We’re just getting started,” Rauenhorst said. “We’re getting feedback from all of the stakeholder groups in the development process. Sure, we have the drawing we have created off one potential scenario…the final height is not determined at this point.”

“Rents in a new development will have to be commensurate with the construction costs,” he said. “We don’t believe that it’s going to be a three to five times multiple as quoted in other articles.”

The rents will have to be at the market rate or they won’t sell, he said, and he said that meetings with the stakeholders should lead to a development that current residents can agree on.

“We look at the experience we’ve had with other projects, like Stadium Village Flats at Washington and Ontario,” he said. “Harvard Market was there, but they chose to move on and do other things.” (Coincidentally, Harvard Market was once owned by the House of Hanson.)

“We will continue to work with all the stakeholders, including the neighborhood and the city. We will ask the Book House and the Podium if they are interested in being part of our project.”

His project will not touch Café 421 or Al’s Breakfast, which are not adjacent, Rauenhorst said.

“We are working with a really great architecture firm—ESG Architects—that has a lot of experience with urban-design principles. They have done a number of projects in the area.”

“We don’t have a final plan set yet,” Rauenhorst said. “There would be a city process we would go through to look for some flexibility in the parking requirement. We would want less parking for the residents so we can provide more hourly parking for business.”

He said he could create “a really great project” with input from all the stakeholders.

“Certainly if we’re looking at a really large investment in the neighborhood,” Rauenhorst said, “I think it’s the responsibility of the entire team on the project to take input from all the stakeholders to create a project that really fits the neighborhood.”

Some of the stakeholders said they distrust developers, especially on large projects. But planner Maze said the neighborhood and planning department can influence development projects.

“The UTEC proposal originally zeroed out public parking, but a good chunk was added back into the project” at the suggestion of the neighborhood and the planning commission, she said.

“As naïve as we were for not knowing how to negotiate with developers,” Skott Johnson said, “UTEC was taking away all that parking that made Dinkytown viable. We’re trying to be smarter with this development.”

“Ideally, we’d like to slow things down,” he said. “We don’t want to rebuild too quickly. We need to be nice to the people being forced out. We’d like to keep them.”

Next, part 3: The House of Hanson and the price of convenience.