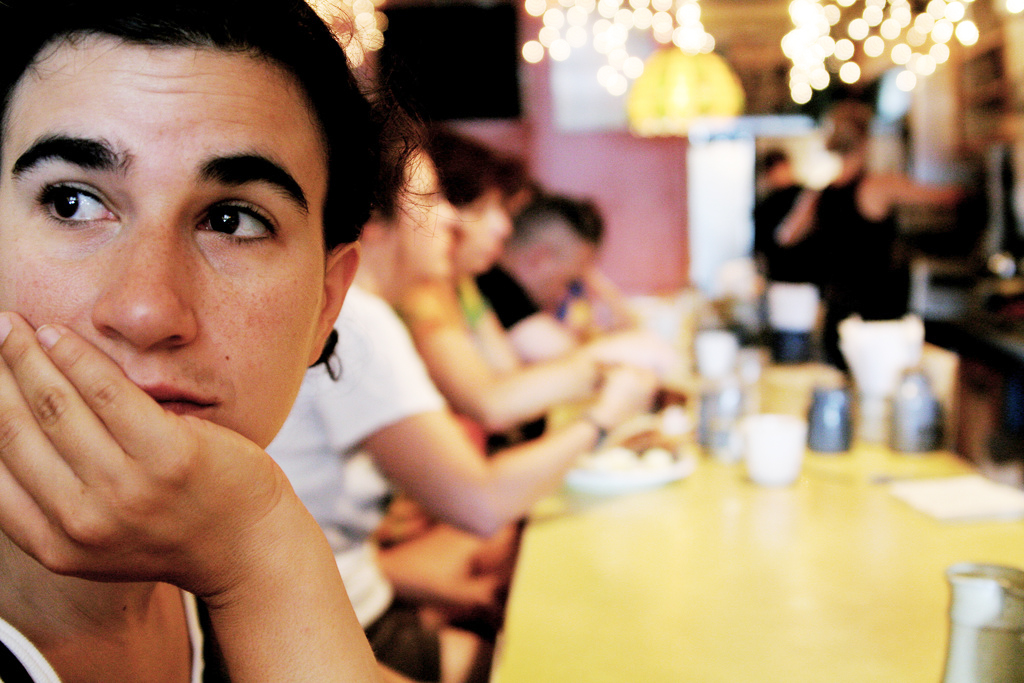 Tenth in a ten-part series. Previously, part 9: Seeds of renewal.

Al’s was founded on May 25, 1950, when Al Bergstrom purchased the small diner created by converting a storage shed between two buildings in the 1940s. A few years earlier, the space had been an alley. Al’s is part of the Schaak Electronics/Simms Hardware building that houses the Espresso Royale Caffe next door, which caters to a diverse clientele.

Dan Zielske, part owner of the coffee shop, said he may be looking for new digs in Dinkytown in 2014.

“I’m not necessarily one of those Dinkytowners that harken back to the days of Bob Dylan and wax ridiculously that Dinkytown won’t come back again,” Zielske said, but he admitted missing the record stores and office supply stores that have gone. “The Book House is the last remaining book shop.” And he said he laments of the loss of so many coffee shops.

“I went to high school in Roseville and we’d ride our bikes here. We’d be occupied all day in Dinkytown. We’d ride bikes, visit the stores, take in a movie at the Varsity and lunch at Annie’s. That was in the early ‘80s and late ‘70s,” Zielske said.

“There have been a lot of changes since I started in here in 1988,” he said, “but this [Opus] project seems out of the scope of Dinkytown.”

The Schaak family has sold Zielske’s building to the company that owns the Green Mill restaurants.

Paul Dzunbar, CEO of Green Mill, said he has no plans to change anything. Both Espresso Royale and Al’s have leases, he said. “They’re part of the same real-estate deal. I don’t have any plans at this time, so they’re staying as is. Espresso has a lease that runs well into 2014. If they decide not to sign another lease, then that could change.”

“This is my first and only purchase in Dinkytown,” he said. “If I did anything ever, I would not move Al’s out because I like it so much.”

“I love Dinkytown,” Eide-Tollefson said, “and I’m as concerned about Dinkytown as I am for my own business, which I’ve been in for 36 years. The Podium has been here much longer.”

Star Tribune columnist James Lileks recently shared some memories of Dinkytown and commented on the proposed development. “If they knock down some history and displace some good, quirky stores, they’d be smart to rent the ground floor to cluttered bookstores and guitar shops,” Lileks wrote. “If they’re typical, they’ll rent it to The Interchangeable Pretentious Sandwich Company or some such chain.”

But, he concluded, “if they lay one finger on Al’s Breakfast, I’ll be at the barricades. There’s progress, and then there’s madness.”

Read the complete series—
Part 1: “There’s a nice vibe; it’d be a shame to mess that up”
Part 2: Threatened by success
Part 3: The House of Hanson and the price of convenience
Part 4: The Book House fights for its life
Part 5: A friendly zone
Part 6: Keeping the town dinky
Part 7: Park it…where?
Part 8: Memories and hopes
Part 9: Seeds of renewal