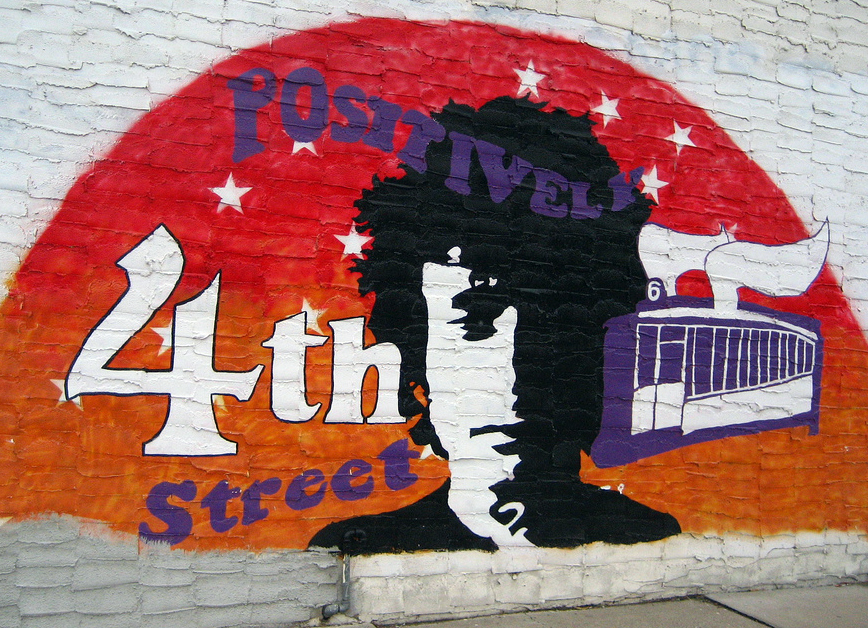 This is the first article in a ten-part series.

When Bob Zimmerman moved into a fraternity house in Southeast Minneapolis, he traded his electric guitar in for a double-o Martin acoustic, browsed record stores to hear new music in the listening booths, changed his name to Bob Dylan, and listened to and performed folk music at local coffee houses—all beginning in the Marcy-Holmes neighborhood.

“The area around the university was known as Dinkytown, which was kind of like a little village, untypical from the rest of conventional Minneapolis,” Dylan wrote in his memoir, Chronicles, Volume One. “It was mostly filled with Victorian houses that were being used as student apartments.”

Dinkytown consists of the four square blocks that meet at the intersection of 14th Avenue and Fourth Street Southeast, said Skott Johnson, president of the Dinkytown Business Association.

Dylan, who lived in the area for about 15 months beginning in 1959, rented a room above Gray’s Drug Store on that corner for $30 a month.

“Above Gray’s, the crash pad was no more than an empty storage room with a sink and a window looking into an alley. No closet or anything. Toilet down the hall. I put a mattress on the floor, bought a used dresser, plugged in a hot plate on top of that—used the outside window ledge as a refrigerator when it got cold,” he wrote.

None of the businesses Dylan mentioned remains in Dinkytown, and the last music and guitar store, the Podium, could be displaced by a proposed new development that may fill almost half of one of those four blocks.

Opus Development Company has proposed a multistory, mixed-use apartment house that would displace several businesses, including the House of Hanson grocery.

Even when Dylan lived there, Dinkytown was not the village it was 10 years earlier when Dayton’s had a Dinkytown branch, and neighborhood children attended Marshall High School in the next block.

“I remember much more of a little village, a self-sustaining village than it is now,” said Walter Johnson, who graduated from Marshall High School in 1946. “There was a grocery store, a butcher shop, a candy store, a dry cleaner, gift shops, a bakery—Gordon’s bakery. Different generations ran it.

“When I was in high school, I’d buy a roll there for lunch. The bakery was there for 50 years. We bought all our bread there,” he said. “There was a very nice jewelry store. I did all of my Christmas shopping in Dinkytown, usually on December 23rd.”

Marcia Pankake, a resident of the Como neighborhood, also recalls doing her Christmas shopping in Dinkytown, as a student in the 1960s.

“Small businesses are what add to the desirability of Dinkytown and they are the reason for going there,” Pankake said. “The Podium draws people from all around.” The Needle Doctor used to draw hi-fi enthusiasts and there were stores for new books and textbooks, three used bookstores, barbershops, an ice cream store, and the bakery.

Jeff Molde, who has owned Podium for 14 years, said he worries about the area’s future.

In the 1960s, the Podium sold sheet music, guitars, records and even tobacco products. It was in the 14th Avenue storefront recently vacated by Pacific and Maine and more recently in the old Victorian home that now houses Casablanca hair salon on Fifth Street, which would also be demolished for the Opus development.

“There’s a nice vibe in Dinkytown,” Molde said. “It’d be easy to mess that up.”

Next, part 2: Threatened by success.