It’s an economic development tool Minnesota recognized years ago, and it could hold the key to helping turn around Detroit. New residents, immigrants and refugees specifically, hold great promise for reviving places battered by de-industrialization or changing economics. 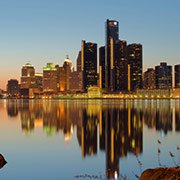 At about the same time Detroit slipped into bankruptcy in July, a regional planning and research organization (Global Detroit) released data on the city and metro area foreign-born population. Writing about the study for ThinkProgress, Esther Yu-Hsi Lee cited research showing immigrants are twice as likely to start new businesses than U.S.-born residents of Detroit.

Such findings are consistent with what is known about new Minnesotans and how they are drivers of entrepreneurship in the Twin Cities and in cities throughout the state. Worthington, Willmar, Austin and Rochester are prime examples of people-driven economic recovery and community growth. This was shown in two past Minnesota 2020 reports in 2012 and 2011.

Data assembled over the years by researchers at Concordia University, the Humphrey Institute at the University of Minnesota, and by immigrant and ethnic organizations in Minnesota identify new residents as drivers of the state’s economy. But, “not everyone gets it,” said Hector Garcia, executive director of the Chicano Latino Affairs Council (CLAC).

Now, with Congress working on immigration reform legislation that is sought by civic organizations, business groups and forward looking state agencies around the country, the White House has supplied even more state-by-state evidence of the economic benefits of immigration.

Using projections from Regional Economic Models Inc., the fact sheets project Minnesota’s economic output would increase by $604 million and create 6,549 new jobs in 2014 if the Senate immigration reform bill were to become law.

Further, by providing a pathway to citizenship and expanding both high- and low-skilled visa programs would increase personal income for Minnesota families by an estimated $1.2 billion by the year 2020, the projections showed.

Currently, 5.7 percent of Minnesota business owners are immigrants. That could grow substantially from what we know of Minnesota’s economic growth from over the past decade. And it could grow even faster if Minnesota and other states can find ways to better link entrepreneurship and inventing with our educational systems.

Contributions to the state’s economy from a liberalized immigration policy would come at all skill and wage levels, however. The White House briefing papers noted the Senate bill would raise “the wage floor” for all workers, “particularly in industries where large numbers of low-wage, easily exploited, unauthorized immigrants currently work.” It cited Institute on Taxation and Economic Policy analysis showing immigration reform would have increased state and local taxes paid by Minnesota immigrants by $13 million in 2010, from $69 million to $82 million.

Across the nation, the Partnership for a New American Economy found in 2011 that the foreign-born population was only 13 percent of U.S. population, but these new residents started 28 percent of all new companies that year.

In yet another study, the National Venture Capital Association noted that between 2006 and 2012, 33 percent of U.S. venture-backed new public companies had at least one immigrant founder.

As of June, immigrant-founded companies had market capitalization of $900 billion, an increase of $400 billion since the venture capital group began measurements in 2006. These companies now have approximately 600,000 employees worldwide, with the majority here at home.

The Senate recognized these contributions to the American economy when it approved its immigration reform bill in early July. But as with all matters involving the House of Representatives, anything that might be good for people or the economy faces stiff opposition.

Yu-Hsi Lee, noting that Detroit has more problems than most cities these days, wrote that immigrants offer hope the city may find new owners and occupants for 90,000 empty houses. Getting those properties back on the tax rolls would help Detroit greatly.

She also notes that Detroit could gain guidance on renewing communities by immigrant-friendly efforts in Cleveland, St. Louis and Philadelphia. We would also nominate the Twin Cities, and several other Minnesota cities, as models for Detroit to study.

But that doesn’t mean we have it all worked out. Much research is still needed. And then, collectively, agreement and consensus must be reached on what public policies would help new Minnesotans access capital, comply with laws and regulations, and properly provide for employees and other stakeholders.

That is the formula for helping Minnesota grow, and moving the Minnesota economy forward.