June 3, 1990, was a chilly, somewhat blustery and threatening rain day in Minnesota.

It was also the day that USSR President Mikhail Gorbachev and his wife, Raisa, came to the Twin Cities of Minneapolis-St. Paul to visit. It was a ‘coup’ of sorts for we in the hinterlands of the U.S., as outlined in this New York Times news article preceding the visit.

Then, as now, I considered such events worth following so, since it was Sunday, I got a general idea of the time schedule and route, and decided to try to get a few amateur snapshots.

The Gorbachev motorcade came down I-94, from Minneapolis, through the stretch that is now under reconstruction, exiting at Lexington Avenue in St.Paul.

I was, then and now, an amateur photographer, running around with an old Nikkormat, using ordinary and relatively slow film and a couple of different lenses. These were the days long before digital photography. Taking pictures was work.

I photo’ed a welcome sign in English and Russian along the freeway, and managed to get rank amateur photos of the Gorbachev’s car at the exit ramp to Lexington, then later, of his arm waving to the crowds on John Ireland Boulevard near the Minnesota Transportation Building near the State Capitol. I passed on trying to join the throng at the Governors Mansion in St. Paul, where the Gorbachevs were hosted by then-Governor Rudy Perpich and his wife Lola. One street over, if I recall, was the always crowded Grand Old Days on Grand Avenue. 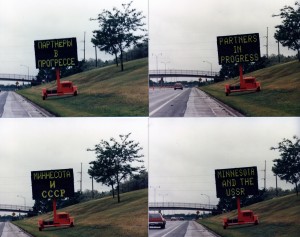 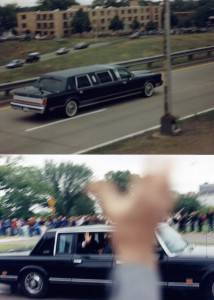 I decided to wait out the afternoon and see if I could see the Gorbachev’s plane take off at our International Airport.

While the weather continued overcast, and the time was getting late, once again I got lucky. There was no oppressive security along Post Road paralleling the south runway at the airport, and about the time the Gorbachev’s were scheduled to depart, the last rays of the days sun peaked out from behind the clouds to the west, giving me sufficient light to take my snapshots.

There were people there with me, watching, but relatively few.

The Gorbachevs plane, I believe it was an Ilyushin, was followed in short order by a United States of America plane. 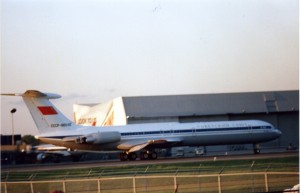 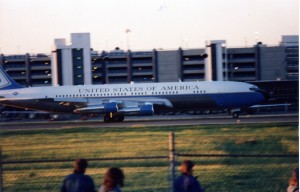 Today is 21 years since that memorable Sunday in June, 1990.

A great deal of history has passed us by in those 21 years, recorded and interpreted in many ways by many people: fact mixed with mythology, and all shades in between. “History” is an interpretation; never exactly as it is portrayed by its teller.

It is not my intention to try to write my version of those 21 years since June 3, 1990, and the time preceding; nor to speculate on the years to come in international or domestic relations. But the passage of history does give much food for thought. Today’s politicians and others, particularly those who view politics and other matters as war, pure and simple, might learn something from that time of detente. Winners and Losers both lose in the long run.

This day I remember two people, Lynn Elling and Professor Emeritus Joseph Schwartzberg, still living, who and were and are committed to making a positive difference for a peaceful future on this planet earth.

Two contributions, one each from Lynn and Joe, to our world community are highlighted here.

Each day I draw inspiration from them to try to do my part to contribute to a sustainable and peaceful future of our planet.

I invite you to do the same. 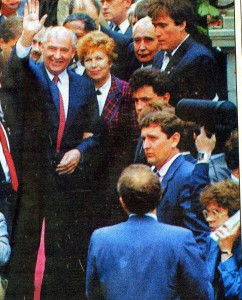 Mikhail and Raisa Gorbachev from the front page of Minneapolis Star-Tribune June 4, 1990