If you’re like me, you don’t need images of bloated bodies and rooftop refugees to be reminded of the devastation left behind after Hurricane Katrina five years ago. Which is why Richard Misrach’s photo series, now on view at the Museum of Fine Arts, Houston, is so striking: His unpopulated images of spraypainted messages marking flood-ravaged homes conjure the despair, rage and resilience without indulging in a revisitation of the etched-in-memory gore. 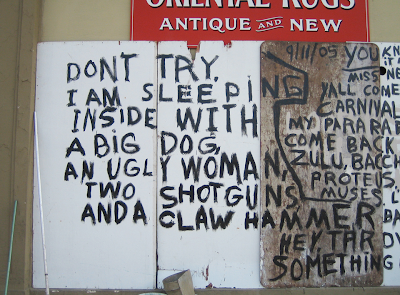 In an excellent narrated slideshow of images at PBS’ site, Misrach talks of both the letterforms and the poetry of the texts, which he calls “small haikus,” noting that he marveled at how “peoples voices were in the way they wrote these things.” 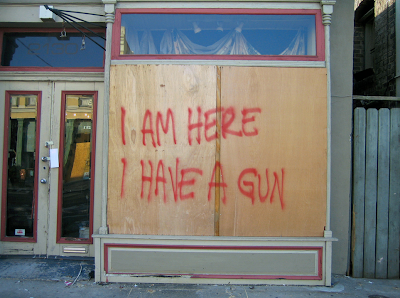 He says he began to mentally categorize the graffiti into themes, including messages of mourning and fear, anger at the government and insurance companies, and “existential pleas to the universe.” Of the image below, showing an overturned car sprayed with the lone word “Sorry,” he says, “I don’t know if that was God writing that to people, or who wrote that….”

Misrach is commemorating the five-year anniversary of the hurricane by donating works from the 69-piece series to the New Orleans Museum of Art, Museum of Fine Arts, Houston, the National Gallery in Washington D.C., the Museum of Modern Art, New York and the San Francisco Museum of Modern Art.

Richard Misrach: After Katrina is on view at the Museum of Fine Arts, Houston through Oct. 31. The series is also compiled in the book Richard Misrach: Destroy This Memory. 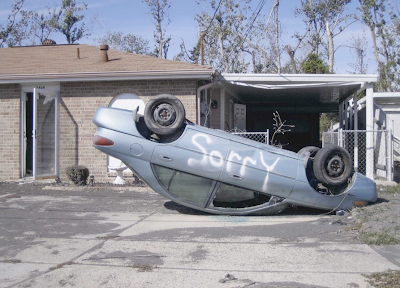