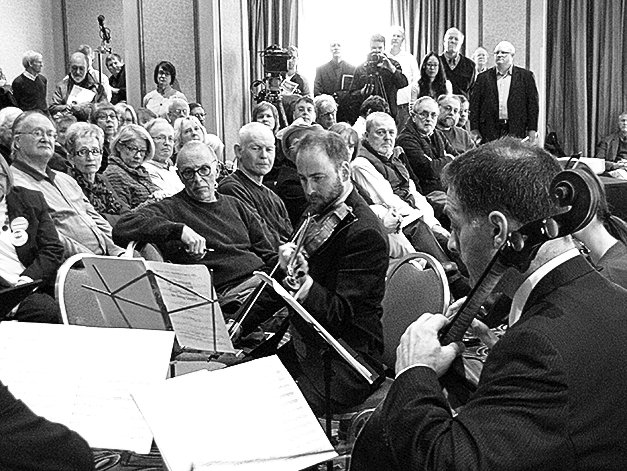 The Musicians of the Minnesota Orchestra, locked out by orchestra management, presented a report to the community, “Keeping the Music Alive,” to a standing-room-only crowd of supporters December 9. The meeting included a musical performance and the announcement of a coming “Winter-Spring” concert series.

Two days before the Minnesota Orchestral Association’s annual meeting, the musicians locked out by orchestra management presented their own “Community Report” December 9.

The musicians — members of Twin Cities Musicians Union Local 30-73 — were locked out by management October 1, 2012 when they refused to agree to a contract they believed would compromise the orchestra’s world-renowned quality.

Meeting at the Hilton Hotel just kitty corner from the newly-remodeled Orchestra Hall, the locked-out musicians reported to a packed room of supporters about the concerts they have produced on their own during the lock-out. They also announced plans for continuing concerts.

“It remains our goal to come to a contractual resolution with the Orchestral Association which will maintain a world-class orchestra in the Twin Cities,” said Tim Zavadil, bass clarinet, the musicians’ chief negotiator.

In the meantime, the musicians have presented their own concerts, bringing in the orchestra’s former music directors to conduct them. Since the lock-out began, they have performed nearly 30 concerts for almost 30,000 people and sold out all of their ticketed performances, the musicians reported.

The musicians announced that, as of November 15, they had raised more than $650,000 in donations from 87 different orchestras and nearly 1,200 individuals in 33 states and four countries.

The musicians have indicated they may form a 501(c)(3) organization “to inspire an ever-widening audience to seek a lifelong relationship with great symphonic music. Our plans in the new year will reflect this vision, and we feel energized and appreciative as we move forward, hand-in-hand with our community.”

“We’re doing this because we are a family and you, our audience, are part of our family,” Tony Ross, principal cellist told the December 9 meeting. “We will not let you down. We promise.”