Close to 120 people came out for Thursday's Envisioning the St. Paul Greenway meeting in St. Paul.

Janell Draper used to bike alongside the buses, cars and semi-trucks of University Avenue to get quickly from her St. Paul Midway home to her Minneapolis job. That changed because of her 9-month-old son.

“Now he comes to work with me in my office,” she said of Rory, who was cooing in her arms during the July 29 Envisioning the St. Paul Greenway meeting at the Linwood Rec Center. “I decided [the University Avenue route] wasn’t so safe.”

Draper, who’s since changed her commute so it’s less direct but more baby-safe, was one of nearly 120 people who came to the meeting organized by St. Paul Smart Trips. The nonprofit wants to see the Minneapolis Midtown Greenway extended into downtown St. Paul along the Ayd Mill railroad corridor, a winding ribbon of land owned by Canadian Pacific Railway.

While the St. Paul City Council supports the project – and has managed to secure nearly $7.5 million in federal transportation funds to pay for it – a recent court ruling in favor of Candian Pacific has made it unlikely the city will be able to acquire the land anytime soon.

Below, a map of the proposed trail provided by Smart Trips. Go here to see a larger Google map. 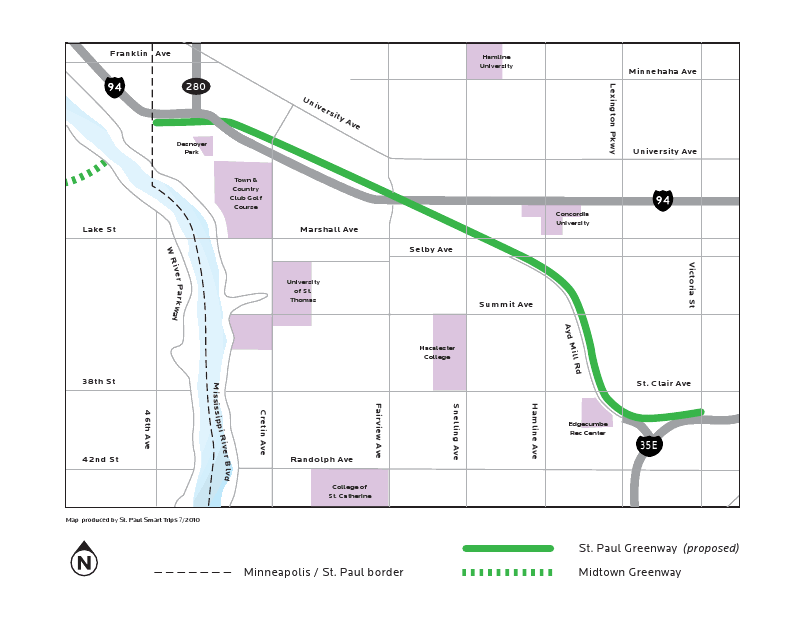 Ward 4 City Councilor Russ Stark called the timing of this latest legal setback “unfortunate and ironic,” given how Thursday’s community summit was planned months ago. Still, Stark said, it’s good for the city to have an extension plan ready in case Canadian Pacific changes its mind.

In the meantime, he urged citizens to make more realistic plans for the present.

Laura Baum of Smart Trips encouraged the crowd to maintain its idealistic momentum and sign their names in support of the St. Paul Greenway Working Vision. The document sets high design standards for a 20-foot-wide, well-lighted and adequately marked pedestrian and biking path. Advocates like Baum believe this would be an improvement over the city’s earlier efforts, like this section of the East River Parkway, below. 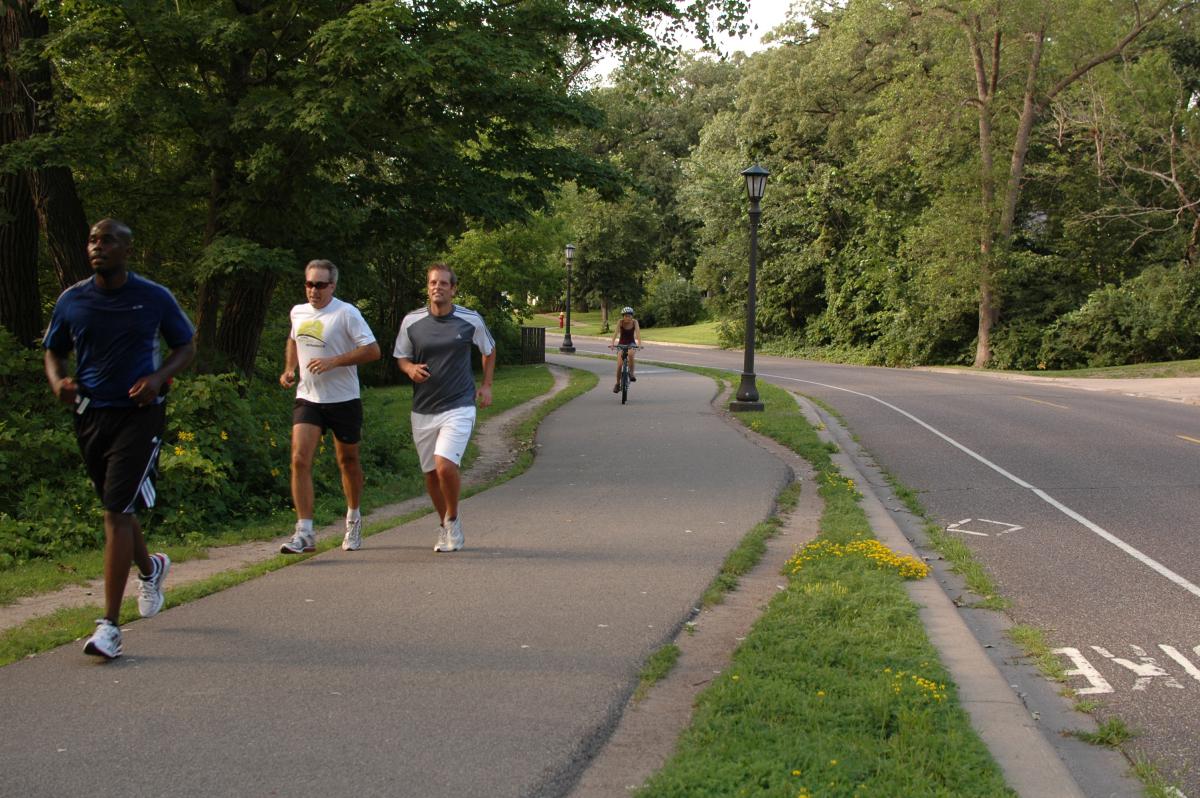 The rest of the meeting was devoted to mingling and constructive conversation, with tables set up around topics like the vision statement, design guidelines and alternative routes.

City Engineer John Maczko and Greenway Committee member Brian Longley manned the alternative routes table, where a steady stream of commuters weighed in on what they believe are the city’s weak points.

“All the bike infrastructure in St. Paul right now is geared toward east-west,” Geoff Pursell said. “We’ve got that nut pretty well cracked.”

Pursell suggested the city modify Griggs Street so it could serve as a north-south corridor, while others suggested changing sections of Snelling so it’s safer for alternative commuters. Still others shared ideas about how the city could better tweak the existing infrastructure in their neighborhoods, or they said they’d like the city to pursue changes to Pierce Butler Route.

While no consensus was reached about what would make the best alternative routes, there was strong agreement that an off-road Greenway extension would be a highly desirable asset to the Twin Cities.

Ken Paulman of West St. Paul said he doesn’t mind biking into Minneapolis on the existing infrastructure, which allows him to take streets like Como, Summit or Marshall into the neighboring city.

But when he wants to go into Minneapolis with his wife and child, who are less comfortable commuting on busy streets, there’s no option for his family.

“There’s isn’t a route that’s safe for all users, that’s universally accessible,” Paulman said. “That’s what this would be.”

George Puzak, one of the original firebrands behind getting the Midtown Greenway constructed, rode in from Minneapolis to show his support.

“Any trail that you think might take three to five years to build, when you’re dealing with railroads, add ten years, just automatically,” he said. “I came over just to encourage people to stick with it, because railroads move really slowly in these decisions.”

On Friday afternoon Baum said close to 50 people had signed on to support their vision, which the group will keep posted online for the next few months. They are also inviting the public to attend their next Greenway Committee meeting on Wednesday, August 11.

While Canadian Pacific’s unwillingness to work with the city definitely put a damper on Thursday’s event, Baum said she and her Smart Trips colleagues left encouraged to keep working toward the original goal, pictured in the conceptual rendering by Cindy Zerger, below. 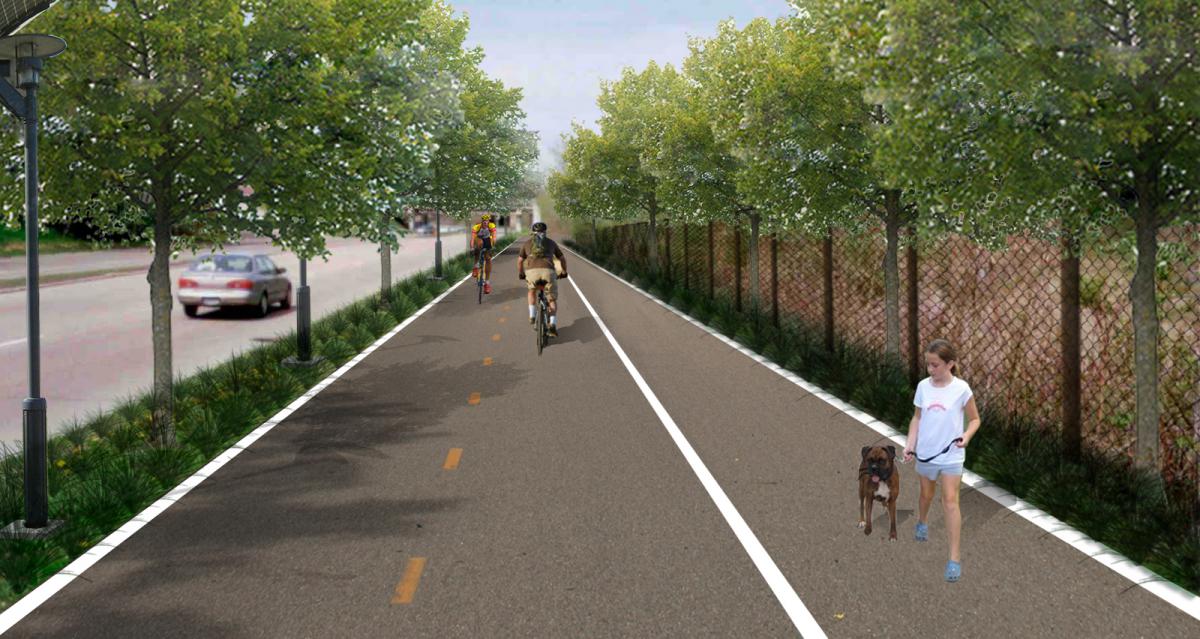 “In all the conversations we had with people,” Baum said, “we were getting the message to keep at it.”