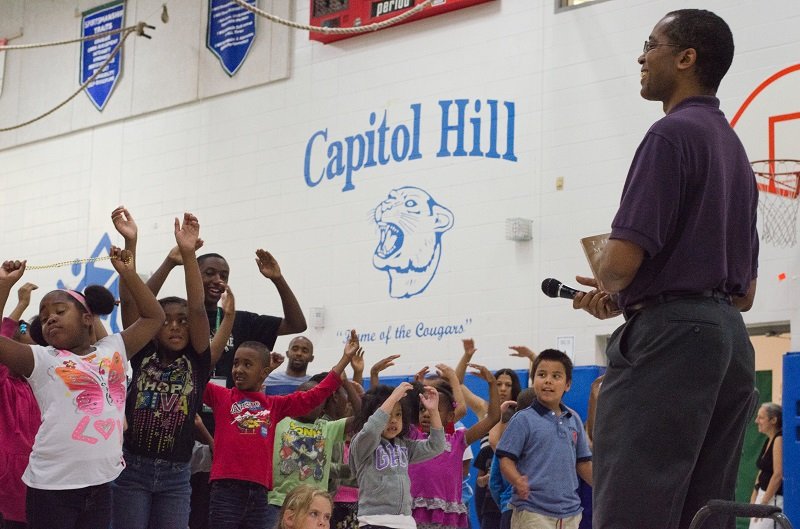 St. Paul School Board member Keith Hardy greets the students of Freedom School on July 25. The Freedom School is a component of the SPPN initiative, which provides holistic academic and social support to children and their families living within a 250-square block area of St. Paul.

It’s early Friday morning and students from the Freedom School on Concordia Ave. are greeting each other over the rumbling of a djembe drum. Staff members are playing loud, kid-friendly hip-hop music from gym speakers while little ones are eagerly expending their morning energy with some impromptu dancing, call-and-response and a little bit of reading aloud.

Every morning at the Freedom School is spent in a “harambee” session (meaning “we all come together” in Swahili), a component of the school’s free summer program that offers academic support and activities to children in the Promise Neighborhood.

It was only a few years ago that the potential of a well-funded, community-led Promise Neighborhood in the Frogtown neighborhoods of St. Paul was gaining significant attention and support from city officials, local organizations and community members.

But after two fiscal misses, which could’ve secured about $30 million for the program, the St. Paul Promise Neighborhood (SPPN) was forced to reassess and scale-back their primary plans, including education, parent engagement, and health and housing improvement resources in the area.

“We’re not working with all [7,250] kids in the neighborhood,” said Muneer Karcher-Ramos, who directs SPPN at its fiscal agent the Amherst H. Wilder Foundation. “We’re really focused on these 1,400 kids that are in these schools and in these centers.”

The Wilder Foundation had to take a stance about concentrating their work after facing funding disappointments, Karcher-Ramos said, but they’re feeling comfortable about how they’re going about their operations and where they see the program going.

For those inside the program’s pipeline — approximately 1,400 children according to the Wilder Foundation — the SPPN has been an integral academic and social support for struggling children and their families in the 250-square block area of St. Paul.

According to a 2013 Wilder Foundation assessment of the Freedom School, between 70 and 88 percent of the 100 or so students assessed independently, improved or maintained their reading skills over the summer.

Those are great outcomes for the children and families within the program, which Karcher-Ramos said could also access social services like rental assistance programs, access to healthcare agencies as well as early learning resources.

The Freedom School has continued to increase their reach, with enrollment topping 485 total students in 2013 and even more a year later, said Rev. Dr. Darcel Hill who directs the program.

“[SPPN leadership] were so committed. Not only did they provide resources and materials, they also provided a significant amount of funding for Freedom School,” she said.

But the program is still a work in progress, Karcher-Ramos said, especially since it’s clear that not all of the 22,200 or so people living in the 250-square block area (about 7,250 of whom are children) are able to access those same opportunities.

The director of the Office of Early Learning at the Minnesota Department of Education Melvin W. Carter III said bringing together the resources for SPPN has been his passion since the founding of the program, but it hasn’t always been an easy path.

“When we started the St. Paul Promise Neighborhood we knew we were starting a journey that would be nonlinear,” Carter III said. “We just continued to express and exhibit a real commitment to the long-term … but it was not without its challenges.”

“[Institutional partners] see the Promise Neighborhood as a place to get in and try something,” she said, “because there’s that great direct connection to families.”

“It isn’t the only place people are trying things but it’s a good place that, when we think something new that we want to try and we know we can’t try it everywhere, it is a go-to spot,” she added.

As a longtime Rondo resident and director of Frogtown Rondo Action Network, Damone Presley said he’s been pleased by the outcomes of the SPPN so far as well as the program’s effort to connect with residents and organizations in the area.

But Presley said that an expansion of SPPN services as well as increasing communication between leadership and residents needs to improve.

“We know what is effective and we know what has been effective,” he said. “What this community needs, is those with the resources should [work with] and empower the residents that live in the community. That’s the way for it to be effective.”

The community is against any top down management for SPPN, Presley said, and they won’t stand for a lack of community involvement. But so far, he said, the program has done a fairly good job working with local stakeholders and he hopes they continue to make the community the driving force behind the initiative.

Karcher-Ramos said that SPPN has made a concerted effort to engage the community throughout the entire program planning and implementation process but admitted there’s been a recent “lull” in communication that needs to be improved.

“There’s definitely a yearning to know more [about SPPN]” from community members, he said.

St. Paul School Board member Keith Hardy agreed that more updates about SPPN’s work needed to emerge. “We haven’t had an update in a while,” he said. “I need to see more action. I’m impatient in that way.”

Hardy, who was visiting Freedom School last Friday, said he also thinks community members need to be more informed about local resources that are associated with SPPN.

“It’s that coalescence of knowledge and of people being aware of what’s offered in their neighborhood,” he said.

Despite the recent lull in finances, things are looking up, Carter III said. Last winter SPPN secured $350,000 and $200,000 by the Minnesota Legislature for years 2015 and 2016 respectfully.

But along with the legislature’s monetary allocation is another reporting requirement for the SPPN, which could be an opportunity for the organization to evaluate its programs and increase communication about its work with the community.

But until more time passes and additional results come forward, Presley said he will be optimistically holding his breath.

Correction: A previous version of this story stated an incorrect title for Muneer Karcher-Ramos. He directs the St. Paul Promise Neighborhood.