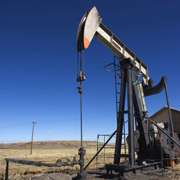 It’s almost summer and it’s an election season. That means gas prices will be up and there will be a lot of mud-slinging, name-calling, finger-pointing and haranguing from politicians as to why. One reason you should be wary of, though, is that we’re not producing enough oil here in the United States.

In our globalized world with numerous countries providing large amounts of oil from a variety of sources, it is nearly impossible to come up with one single determinant for the price we pay at the pump for gas. Even experts vary wildly on explanations, from supply and demand metrics to geopolitical circumstances.

Still, in the heart of a national election cycle it is common for politicians on both sides to use domestic drilling as a harbinger for lower gas prices. One recent example: Mitt Romney blames President Obama for high gas prices and promises more drilling, and the President responds that U.S. oil production under his Administration is at an eight-year high.

But as much as they want to, politicians have almost no control over the price of gas. As Steve LeVine at Foreign Policy magazine notes, “nothing that Obama does will lower gasoline prices this year, nor next and probably 2014 as well – not a decision to open more federal land to drilling, nor more encouragement of renewables.”

And you can see that in this graph hosted by the Associated Press. Domestic oil production in the U.S. and gas prices have had little to no relationship with each other going back to 1976, for every President from Carter through Obama. 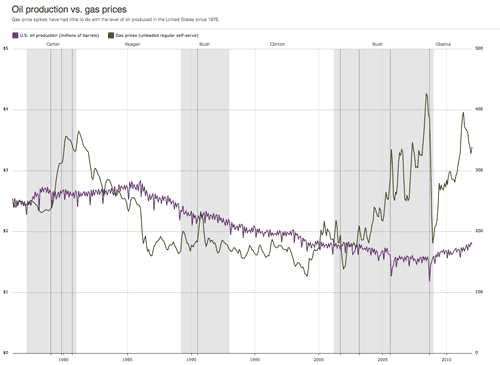 So the next time you hear politicians demanding or defending domestic oil drilling to bring gas prices down, take it with a grain of salt and remember that they have about as much control over gas prices as you and me…unless we all ditch our cars and ride bikes.

*If you’re looking for a straightforward, practical and well-versed voice on the world of oil, I recommend following The Oil and the Glory at Foreign Policy magazine at oilandglory.foreignpolicy.com