A pair of bald eagles floated high above the confluence of the Minnesota and Mississippi Rivers Tuesday as a line of Dakota Indians, following in the footsteps of their exiled ancestors, rounded a highway curve in Mendota and marched toward Fort Snelling. And toward a spiritual healing of Minnesota’s most painful chapters — the executions, imprisonments and forced removal of the Dakota from their homeland in the wake of the Dakota War of 1862.

The marchers — about 100 Indians, trailed by another 100 or more non-Indian supporters — were finishing a week-long Dakota Commemorative March, a 150-mile-long tribute to 1,700 Dakota captives — most of them women and children, along with some elderly men — who were marched by soldiers from the Lower Sioux Reservation near present-day Morton, Minnesota, to Fort Snelling. The forced march is the story of Minnesota’s own Trail of Tears as innocent Indian civilians — non-combatants in the six-week war that raged up and down the Minnesota River Valley — were harshly removed from their homes and put on the road to imprisonment and exile. At every mile post along the road retracing their steps — the 10th year the march has been recreated — descendants of those Dakota exiles placed stakes in the ground bearing the names of the Dakota women who had been left as the heads of their families during a time when state authorities had proclaimed that the Dakota must be “banished or exterminated.”

During the forced march and internment, it was hard to tell the difference between the two things: Although official histories say there were few deaths along the march, oral Dakota histories say there were many, including a death of a baby snatched by a mob near New Ulm, and, at Henderson, a mob that hurled rocks at the captives. And there is no question about the many deaths that occurred in the prison camp at Fot Snelling — sources say 150 to 300 died in the place some soldiers called “the squaw camp.” Gabriel Renville, a mixed-blood Dakota held prisoner there, wrote:

“We were so crowded and confined that an epidemic broke out among us and children were dying day and night, among them being [Solomon] Two Stars’ oldest child, a little girl…. The news then came of the hanging at Mankato. Amid all this sickness and these great tribulations, it seemed doubtful at night whether a person would be alive in the morning.”

The captivity and suffering of these women and children is an unfamiliar story to most white Minnesotans, and, until recent years, was even unfamiliar to some Dakota Indians whose families did not speak much about the lost war, their lost homeland or the travails of their ancestors. Much as many World War II veterans did not share the stories of combat with their families, many Dakota stayed silent about the suffering they had experienced. It was too horrible to discuss.

“Every Sioux found on our soil should get a permanent homestead, 6 feet by 2,” wrote the St. Cloud Democrat as the prisoners were arriving at Fort Snelling. “Shoot the hyenas … exterminate the wild beasts, and make peace with the devil and all his host sooner than with these red-jawed tigers whose fangs are dripping with the blood of innocents.”

The newspaper was edited by prominent frontier crusading journalist Jane Grey Swisshelm, a champion of abolition and women’s rights. The irony of her demand for native blood may have been unknown to the Dakota, but the sentiment was clear: White Minnesota wanted an end to them.

“These vermin are not fit to live on the face of the earth,” wrote the St. Paul Press, echoing the St. Paul Pioneer’s call for the “utter extermination” of the Dakota. “The sooner they are totally extinguished as a race, the sooner one of the greatest of all nuisances will be abated.”

No wonder this history remains difficult to confront. Minnesota wanted a “final solution” for the Dakota. And it came close to accomplishing that goal.

The weight of racism, retribution, rejection and — in the end, somehow — survival, hung in the air Tuesday as elder Phyllis Redday, from Sisseton, South Dakota, led the ceremony in the damp woods below the recreated Fort Snelling. Praying and smudging attendees with clouds of smoke from a burning sweetgrass bundle, Redday moved and prayed clockwise, reading the names of the women prisoners from stakes set in a circle. The Dakota sang traditional songs, and cried out in anguish, and cried tears. I stood among the silent crowd of non-Indian supporters, watching from the tree line near a pipestone marker that was dedicated by departed Dakota spiritual leader Amos Owen in 1987. I was at that ceremony, on the 125th anniversary of the war, a year that Gov. Rudy Perpich had declared to be a “Year of Reconciliation” between the Dakota and the white majority.

It was an optimistic idea. A quarter century later, the work of reconciliation remains undone.

Grace LaMere and her sister, Pat, only began to discover their Minnesota roots in recent years, as they began to hear for the first time of the hardships and exile that had led their Dakota ancestors from the Fort Snelling concentration camp to a remote reservation in Nebraska where there mother was born. On Tuesday, they watched at Fort Snelling as the ceremony honored the exiles, including their great-great-grandmother, who had been one of the imprisoned who spent the winter beneath the walls of the Fort, literally below the weight of U.S. military authority. Grace LaMere, 62, worked in the City Clerk’s office in Omaha for 34 years before learning a bit of her family’s history. She drove up from Nebraska with Pat, who is a paraplegic, Tuesday. As they watched, they were overcome by emotion, and by a feeling of deep connection to a land their ancestors had known as home. 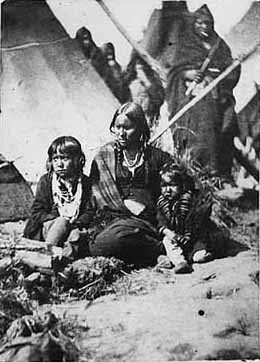 Left: One of the wives of Little Crow, the reluctant leader of the Dakota War, and two of their children, in the prison camp

“I don’t remember my mom ever saying anything about all of this,” Grace said. “We never talked about it. But something just called to me — I had to come and be here.”

Her sister, Pat, who has needed to use a wheel chair since a 1973 auto accident, felt the same pull.

“You can just feel the presence of the spirits that are here,” she said. “This is very spiritual, and very sad for me. I want to touch the ground, to feel connected to this place. I feel we are home here.”

From her wheelchair, she couldn’t physically touch the earth. But, as she had done at another ceremony in August marking the start of the 1862 war, she reached out and waved her hands over the soil of <em>Mni Sota Makoce</em>, the Dakota words for the this place, the land where the waters reflect the clouds.

Both sisters were wearing red sweatshirts. On the back, they said, “Proud Descendant of The Exiled.” On the front, they said, “Damakota:” I am Dakota.

A simple statement — I am Dakota — can seem radical in a place where, following a short but bloody war, no Dakota was permitted to remain where, in fact, the state paid bounties for Dakota scalps. But some Dakota worry that the 150th anniversary observances of the war and its punishments might obscure the larger truths about Minnesota and the culture and history of its original inhabitants.

“Sometimes, it seems as if we didn’t exist before 1862, or after 1862,” said Darlene St. Clair, a Dakota scholar who is a professor at St. Cloud State University and a visiting professor in the University of Minnesota’s Department of American Indian Studies. St. Clair participated in the long march to Fort Snelling and says it is important to observe the 150th anniversary of the war. But she says she hopes it “won’t mean we will fall off everyone’s map again next year.”

“There’s been a crazy interest in the conflict, but that, in itself, is troubling,” St. Clair said during a communal meal at St. Bonaventure Catholic Church in Bloomington that followed the Fort Snelling ceremony. “People seem fascinated by every detail of what happened during the six weeks of war, but not so interested in understanding the context of what led up to it, and the consequences that followed. So you hear a simple story: It was a tragedy for everyone; both sides were at fault; ‘Mistakes were made.’ But that doesn’t really cover it. When you understand it fully, both sides weren’t equally wrong, and one side, the Dakota people, suffered a greater injustice.” 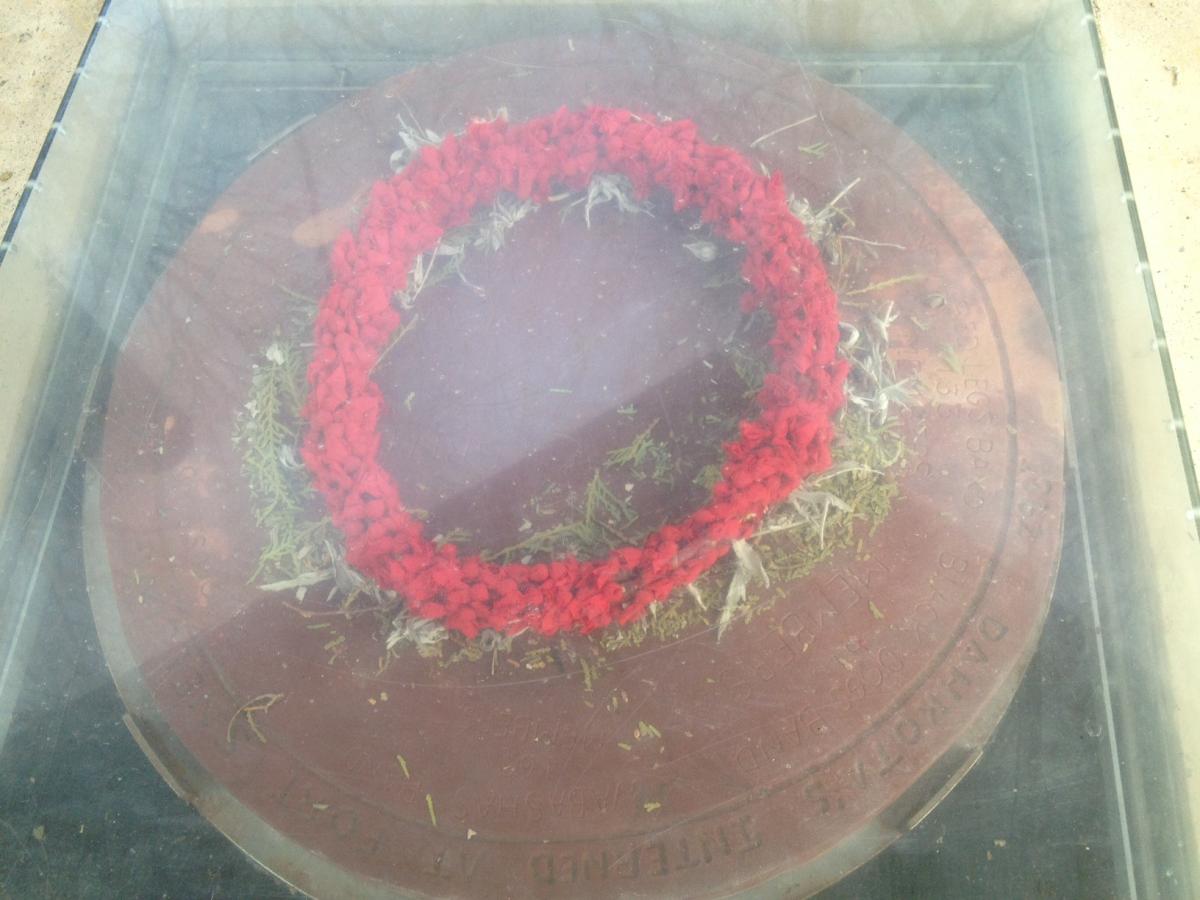 This pipestone marker marks the place where nearly 2,000 Dakota Indians were imprisoned in 1862-63.