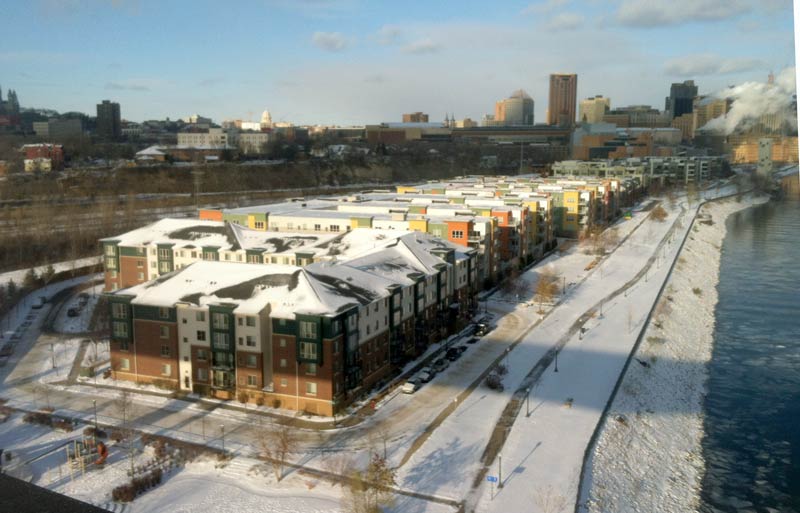 Last year I went to Thanksgiving dinner in Chanhassen. A friend of mine bought a house out there and hosted a dinner and, being curious and friendly, I made the trek.

I was surprised when I got to my buddy’s place because, though it was in the middle of nowhere, my friend’s house wasn’t a house per se. Rather, he’d bought an attached townhome that was part of a long row of similar complexes in a brand new greenfield development, complete with sidewalks and quasi-porches and a pleasant almost grid-like street network.

Looking out at the sidewalks, I turned and asked my friend, “So where’s do you walk to?”

He looked at me blankly. “Um. People walk their dogs?”

The useless sidewalks in my friend’s strange middle-of-nowhere quasi-urban neighborhood got me thinking, so I started looking around for places where you have relatively urban densities, but no urban diversity. There are lots of these places, and not just in the suburbs. It doesn’t make any sense, but there you have it. Let’s meet some of them!

One way to measure this is through Walkscore, which simply counts the number of shops, parks, and transit options within a certain distance of your address. For example, here’s what my friend’s townhome neighborhood in Chanhassen looks like from the outside*:

And here’s the Walkscore: Please note: It’s very difficult to get a Walkscore of 0. That’s impressive. Well done, Chanhassen! It’s all the more impressive in an area that technically has sidewalks and a facade of urban design.

There is probably a long list of similar suburban examples I could list, and one of the problems stems from the difficulty of attracting retail into suburban developments. For example, see this situation in Blaine, or the mixed-use challenges in Chaska [see comments].

But the real problem is when I see these kinds of developments built in ostensible cities like Saint Paul.

For example, here’s what the “upper landing” development along the Mississippi River in the shadow of Downtown Saint Paul: solid blocks of 4-story buildings…

But here’s the Walkscore: a paltry 36. Basically, there’s nothing down there unless you cross the busy Shepard Road quasi-freeway and climb the hill to West 7th Street. Here’s a similar project along West 7th Street in the Shepard-Davern area. Again, you have solid blocks of beige 4-story condos…

But here’s the walkscore: 31. There’s one restaurant (Buca), a Taco Bell, and an Ethiopian restaurant that’s always in trouble with the city for various license violations. The Legacy of Crappy Zoning Before-and-after zoning in the Shepard-Davern area.

How does this happen? How do we build dense urban buildings that are potentially walkable only missing the mixed-use component that might actually provide destinations?

One of the big culprits was the single-use zoning that Saint Paul had in place for many years. I’m not sure of the exact history, but a few years ago the city began replacing its traditional “Sim City” zoning categories (R for residential, I for Industrial, and B for Commercial) with mixed-use “Traditional Neighborhood” zoning that allowed for the mixing of residential and commercial uses within the same building.

TN zoning came too late for many of these spots, but even in places where you do have TN zoning in place, you can still have difficulty creating proper mixed-use environments. For example, the latest from-scratch large-scale development in Saint Paul is in the Victoria Park neighborhood, also along West 7th Street. [See bottom image.] There, despite the four-story apartments and condos, there doesn’t seem to be much of any retail yet.

There are lots of reasons why you might have density without mixed-use, but none of them seem very satisfying to me. One is that people don’t want it, because they view commercial spaces as a nuisance. For example, in the (aforementioned) Shepard-Davern area along West 7th Street there’s a new building planned to replace an empty office building. In the latest Highland Villager, the local paper, I found the following quote from a neighbor:

A lifelong highland park resident who moved into Gateway Village [development] several years ago said she loved the idea of getting rid of the vacant building, though she is concerned about adding more housing and traffic to the neighborhood. ‘I don’t know how I’m going to be able to get sell my condo and get a good price for it,’ she said.

To me, it’s sad when development equates to misanthropy. Surely the presence of more people, shops, and things to do in your neighborhood is a good thing and not a detriment?

Another challenge stems from the depressing fact that sometimes there isn’t much demand for commercial spaces because they often have trouble filing up. For example, it’s commonplace in many parts of the Twin Cities to see a new mixed-use commercial/residential building where the ground floor retail stays vacant for years. This is another challenge that cities have to overcome. We need to change mindsets about retail, and start figuring out how to encourage walking (and shopping) in urban neighborhoods instead of simply driving to Target once a week.

In short, I just don’t get these kinds of buildings. I don’t get it in the suburbs, but I really don’t get it in the city. The whole point of living in an urban environment with sidewalks and 4- to 5-story buildings is that you can walk to places. Why would build a bunch of that kind of building only without anywhere to walk to? Why would you want to live in a 4-story building in the middle of nowhere? Wouldn’t you rather be somewhere?

Maybe someone can explain it to me. Thanks in advance! New apartments in Saint Paul’s Victoria Park neighborhood. Will they have any walkable destinations?