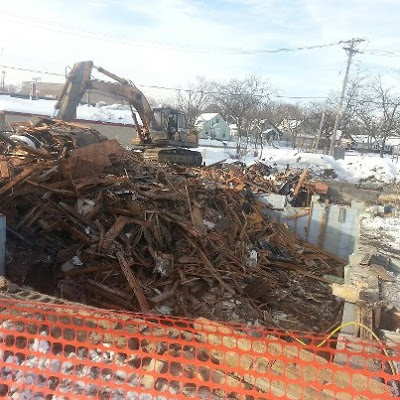 Last summer I was asked, as a Jordan resident, what I thought about a house at 2637 Emerson Avenue North. It was a vacant property on the MLS for a song, and the City of Minneapolis was contemplating acquisition for demolition. I maintained that the built form of the house was intact, that the interior wasn’t beyond repair, and that the block already had four vacant lots and would not be improved with a fifth. My position as a resident was that this house should be purchased to keep it out of the hands of a slumlord, but that it should not be demolished.

I was not entirely surprised to see that CPED moved forward with acquisition and began the demolition process in spite of my recommendations. It wouldn’t be the first time, and nicer houses have been torn down. I was pleasantly intrigued though, when Nicole Curtis the Rehab Addict, made a public push to make the backhoe go away. That move has revealed a few problems with the demolition process, not the least of which is the demolitions themselves.

But the process overall is wrought with inconsistencies that don’t serve anyone well. Stopping a demolition at the last possible moment is stressful on any preservationist. Having to undo the demo contract can’t be pleasant for city staffers. And losing out on a contracted demolition is fundamentally unfair to the crew that just showed up to do a job. But as more and more good private market developers are coming out of the woodwork in north Minneapolis, they are proving one of my long-held beliefs: there is a market for these homes, if they are marketed correctly.

The devil, as always, is in the details though…

…Consider this: If the city of Minneapolis owns a property that they spent $20,000 to acquire, and that they will spend another $20,000 to tear down, what should their asking price be if someone expresses interest? Should they essentially give it away, since it has no real value? Should they attempt to recoup some acquisition and holding costs, but ultimately sell at a discount? Should they appraise just the land, and sell for that amount? Or should they insist upon getting an appraisal and selling for that amount, even if sticking to their guns means no one will buy the house and it will eventually be demolished?

In the real world, placing a demolition order on a structure you own is akin to a prima donna athlete declaring he’ll never play for his team again and demanding a trade, or like a Kardashian marriage that comes with a pre-nup; it’s clear to everyone else that the item in question has no real value to the person footing the bill. But in true Orwellian bureaucratic logic, the city’s policy (or state law; I’ve been told differently about what the driving faction of government is here) says that properties must be sold for their appraised value.

(To which I would say, if I were a potential buyer, “Ok, give me an appraisal where all the comps are dilapidated structures with demolition orders on them. I want to know what those are worth.” But that’s not quite how it works either.)

The breakdown of financial logic comes when we realize that up until the point someone gets a property at a discount, the expenses are only the acquisition and holding costs. If it’s torn down, we pay the demo fee, we lose the tax base, at least temporarily, and new construction is heavily subsidized. That difference in the city’s budget could exceed $150,000 per property. And yet houses that could be paired with a buyer are being torn down.

It’s not all Bizarro-World thinking though. Let’s hypothesize that Minneapolis just turned over its vacant housing stock to the Nicole Curtises of the town. And then a group of slumlords might come along and posit that, legally, there is no difference between Mahmood Khan bringing a property back up to code, mismatched windows, and Neapolitan siding, and all, vs. Nicole Curtis doing nationally-celebrated restoration. This cadre of problem property owners looks at the racial disparity between home owners and renters, and presto! Discrimination lawsuit full steam ahead. Just defending against such a complaint could potentially offset whatever budgetary gains the program had realized. That’s no reason to accept the status quo; it just means that there is a reason behind why the policy is that way, and a good solution will entail working around that particular obstacle.

And therein lies the demolition problem. We have properties that are being torn down. We have good rehabbers who could take these properties on instead. And these houses still wind up in a landfill.