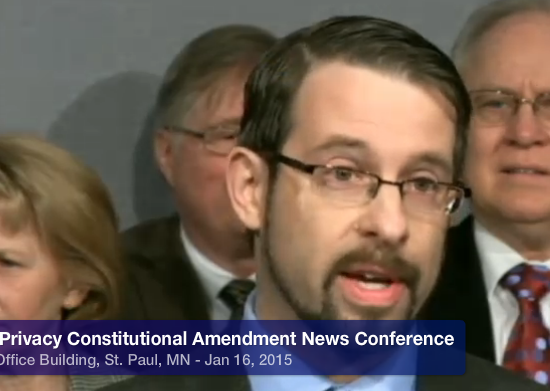 It’s not often you get Democrats, Republicans, Libertarians, and members of Occupy to agree on something. Today  at 9:45 a.m. that happens as legislators hold a news conference to promote an amendment to Minnesota’s constitution to protect personal data from unreasonable search and seizure without a warrant.

Supporters say the amendment is needed to clarify that personal data is covered by the fourth amendment. Bill author Sen. Branden Petersen (R) points to recent revelations that a loophole in federal law allows the government to search and seize any emails that are more than six months old without a warrant.

The bill has been passed through the Civil Law Committee and will be taken up in Government Operations committee on Thursday. The bill still does not have a hearing scheduled in the Senate Judiciary Committee. Petersen says Sen. Ron Latz (DFL) still needs to be convinced the bill should be heard.

Replay of the video is above. Press release from today’s news conference is below.