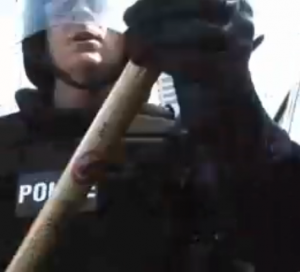 Democracy Now’s Amy Goodman was among 46 journalists arrested or detained during the 2008 Republican National Convention, and now she’s among plaintiffs suing law enforcement in Minneapolis, St. Paul and Ramsey County as well as the Secret Service.

The suit, filed Wednesday in United States District Court in the District of Minnesota on behalf of Goodman and Democracy Now! producers Sharif Abdel Kouddous and Nicole Salazar, challenges “the policies and conduct of law enforcement during the Republican National Convention (RNC) in 2008 that resulted in the unlawful arrests and unreasonable use of force against the plaintiffs,” according to the nonprofit Center for Constitutional Rights, which filed the suit. Goodman was manhandled during her Sept. 1, 2008, arrest, despite her protestations that she’s a journalist. Her arrest came as she enquired about the earlier arrest of Salazar. Salazar was filming as riot-clad police, ignoring her screams, shoved her to the ground and apparently kicked her.

Goodman says the arrests are “not only a violation of freedom of the press but a violation of the public’s right to know. When journalists are arrested, that has a chilling effect on the functioning of a democratic society.”

According to CCR’s release, the suit seeks:

compensation and an injunction against law enforcement’s unjustified encroachment on First Amendment rights, including freedom of the press and the independence of the media. Attorneys say the government cannot limit journalists’ right to cover matters of public concern by requiring that they present a particular perspective; for instance, the government cannot require journalists to “embed” with state authorities. Goodman further asserts that the government cannot, in the name of security, limit the flow of information by acting unwarrantedly against journalists who report on speech protected by the First Amendment, such as dissent, and the public acts of law enforcement.

Video of Salazar’s arrest, which she says galvanized support for the journalists: