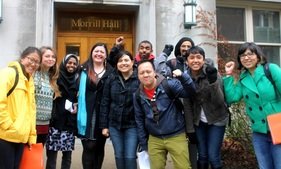 The Whose Diversity? group at the University of Minnesota.

It’s clear. Many in this administration are out of touch with the weight of the equity and diversity issues they extol. In a speech to the North Hennepin Area Chamber of Commerce on Nov. 13, 2014, University of Minnesota President Eric Kaler stated, “I want to speak about serious matters — from student debt to how we seek to tackle some of the state’s and world’s grand challenges — from widespread hunger to the inexcusable achievement gap in our schools. But I do need to put first things first … What about Floyd of Rosedale!”

Floyd of Rosedale? First things first? A pig? I guarantee many underrepresented and first-generation students do not share the president’s “Gopher pride.” Their commitment is with community, family and navigating those same “grand challenges.”

It’s time to cease being economical with the truth, particularly around TRIO and the closing of the Postsecondary Teaching and Learning Department — a department shaped by former faculty of the general college.

TRIO is a nationwide civil rights legacy program that serves new low-income, first-generation, disabled and immigrant students in the College of Education and Human Development each year.

Some of the highest retention rates for 2013 first-year students were from TRIO students — all who benefited greatly from PsTL courses. PsTL doesn’t duplicate general coursework, and faculty can’t duplicate it without roots in this type of curriculum. PSTL faculty have a well-researched pedagogy that positively impacts our most diverse students.

The closing of PsTL and the administration’s reasoning follows the same typical response (by the privileged) to attack the bodies that do the actual work, only to replace it with “great ideas” by “leaders” whose paradigm comes from a place of privilege.

When the academic readiness gap between TRIO students and their more privileged peers continues to grow, the impact could be sobering.

The administration should value the actions by Whose Diversity?. You cannot praise the triumphs by civil rights activists and co-opt the history of the 1969 Morrill Hall takeover while simultaneously demonizing today’s activists.

The demands by Whose Diversity? are crucial — a prolongation of demands made before by women’s suffrage rights activists at the University in the 1920s, demands made by the Afro-American Action Committee in 1969 and demands of Chicano students who occupied Morrill Hall in 1971. No more rhetoric. No more “cosmetic diversity.” Time is up!