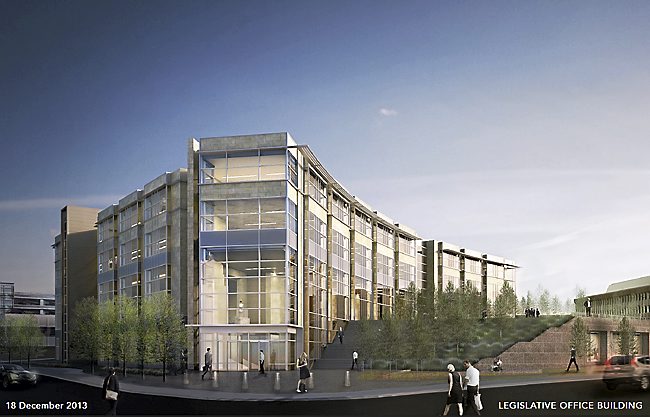 The new State of Minnesota Senate Office Building is proof: we have an incoherent approach to urban development and continually fail at creating vibrant spaces.

The architecture. The urban design. The lack of planning. The parking garages. The midnight financing. The confusing lease agreement. It is hard to imagine a scenario playing out that would result in a worse outcome.

Does Anyone Understand Planning and Urban Design?

The Senate building is next to a transit station, but it does not have an active streetscape. Even worse, the accessory parking structure takes up prime, developable land near the station that could be used for hundreds of better uses. In other words, we have spent $1.1 billion on a light rail line that aims to promote transit ridership, walkability, density and urbanism; yet the same people who helped approved the line have also decided to build a parking garage that doesn’t acknowledge the transit station’s existence.

The City of St. Paul and Metropolitan Council have been good at standing up for urbanism along University Avenue. However, this being a State project, exempted from most zoning and building code, the designers of this building have opted to ignore the context of the code’s intention [UrbanMSP].

This is bad planning. No. Correction: this is embarrassing planning.

Undergraduate urban studies students have more sense than to ignore the streetscape at an important transit node.

The building ignores the people who will be walking along side it. Nothing active is at the street level along any side of the building. Along University Avenue – one of the most important aerials in the Twin Cities – is a blank wall.

To top it off, the public green space has been elevated outside of the public sphere. It is not welcoming to any passerby and gives off the appearance of a private park; no different than what one is likely to find at a suburban corporate campus. These types of green spaces are often left empty. Don’t believe me? Check out every single corporate “green space” in either downtown Minneapolis or St. Paul. 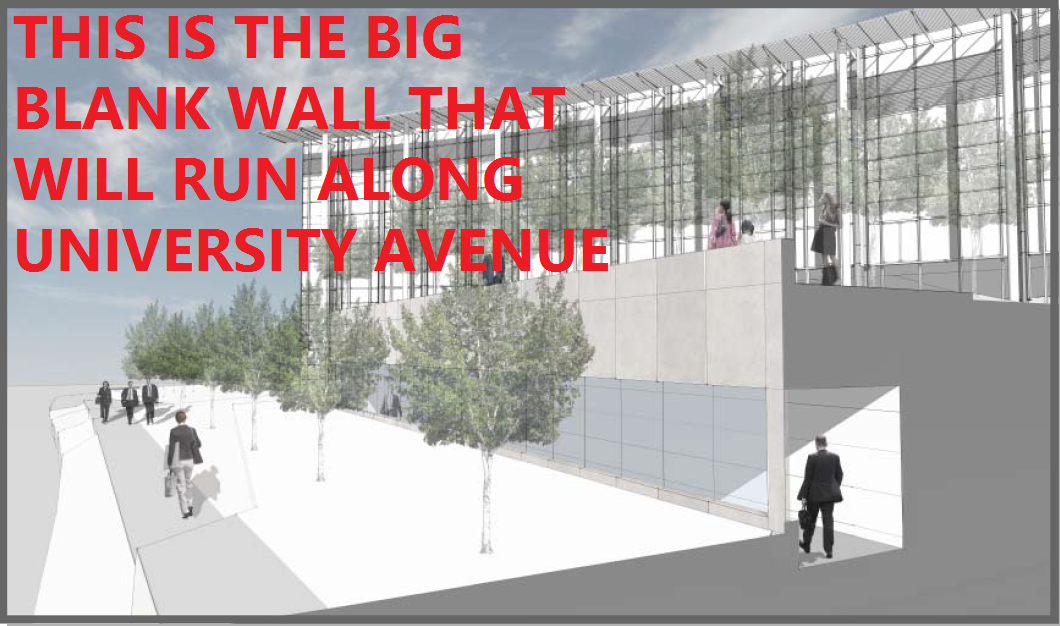 In all fairness, this drab blank wall appropriately echos my attitude towards the Senate.

Everything written above goes without mentioning the poor design of the $27 million six story parking garage. Of which is required by legislation to have “on-site parking facilities for ALL members [of the Senate] and staff and disabled visitors” [bold emphasis mine]. 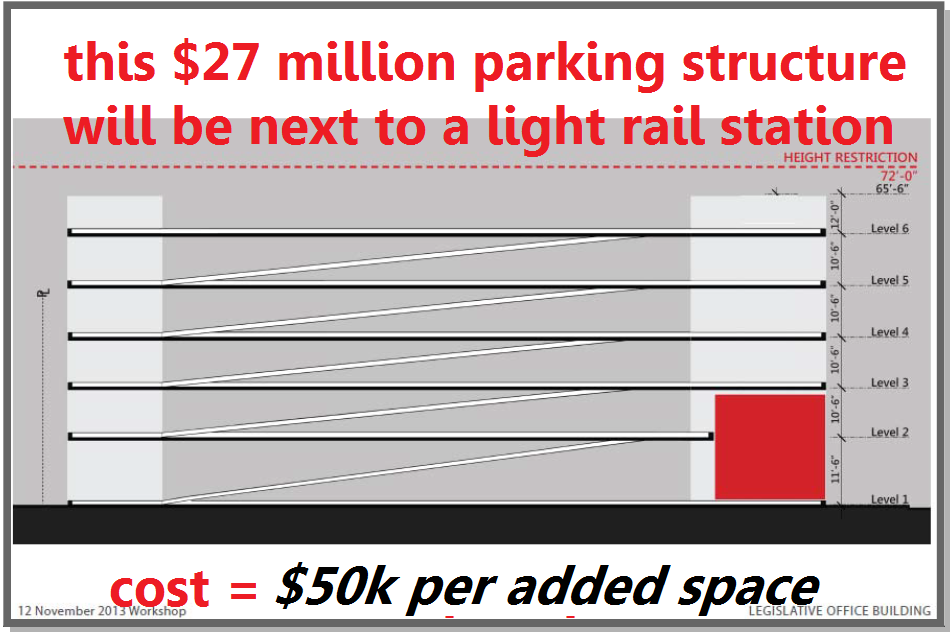 The legislation was written with the pretext that literally everyone using the building will drive.

38 percent of the $90 million price tag is going to subsidize parking.

The parking element of the project will include a $27 million, 730 stall parking garage, with approximately $37,000 per space. But, this isn’t the best way to look at it: there are currently 188 open surface spaces, a net gain of 542 parking spaces. Or, approximately $50,000 per additional space created. 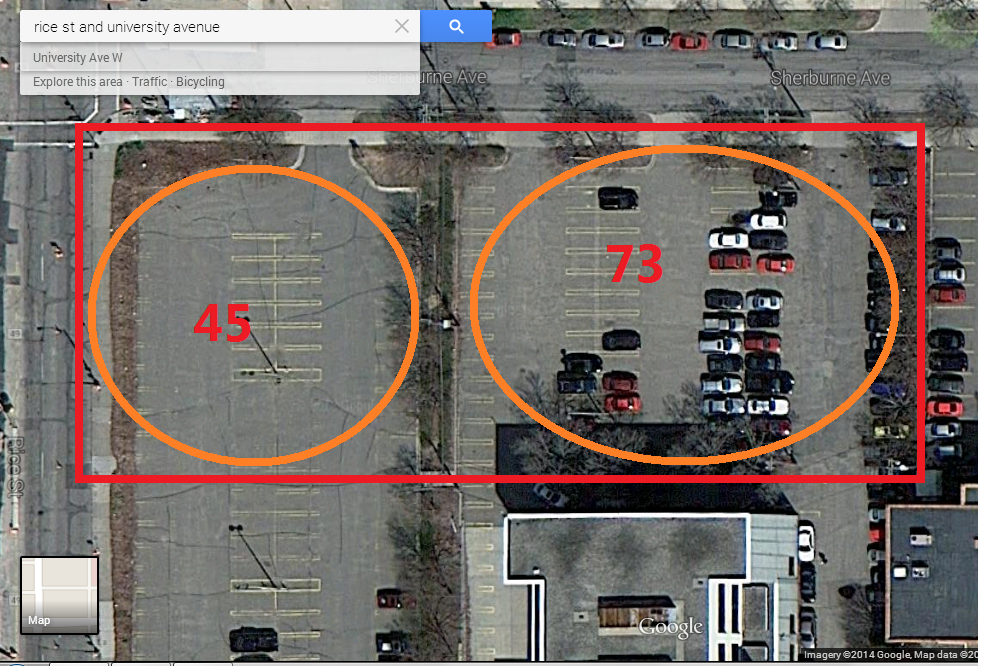 This is how places decline. We spend tremendous amounts of money on structures near transit investments that will give us a poor return. In this case, our poor return in not just financial, but a genuine assault on our neighborhood, historic building stock and culture. This is the type of investment that will continue to keep our Capital Region lifeless from May through December.

The Wrong Type of Architecture?

Democracy is not an architectural style. But, if it had to be, it’d be neoclassical Beaux Arts. It’s a building vernacular that compliments the awe of civic and democratic aspirations. It’s a typology where you look at and instantaneously know, “This is a place of importance“. Historically, this has held precedence. The proposed architecture all but softly mutters: “I am an office building for a tech firm.” 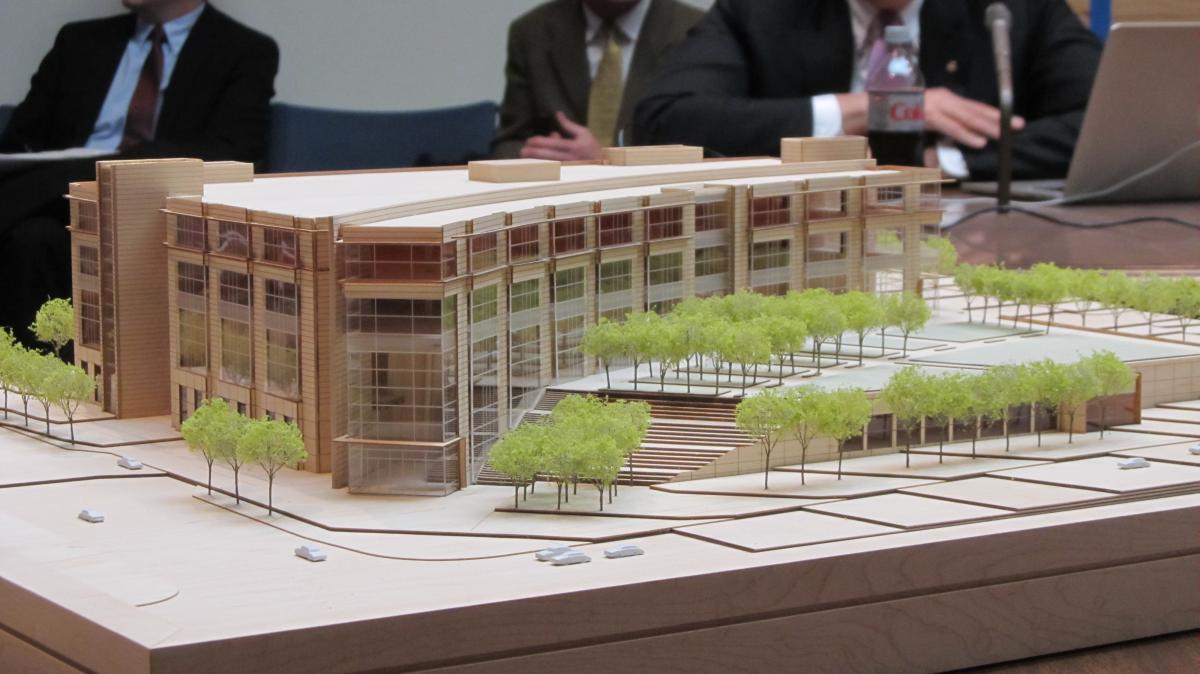 This building would fit in nicely in an Eagan office park off 35E.

Many of our State Buildings pay homage to the Beaux Arts – some better than others – but they intentionally express this purpose of democracy and are welcome additions to the public realm. While bland and lacking in LEED point generating gizmos, these buildings are handsome and orderly.

Monument buildings have an obligation to present themselves as consistent with our expectations of democracy. In the words of James Howard Kunstler;

“[Monument buildings must] present a sense of decorum to the city. The city can be an intimidating place for the person who lives there. It’s a place where you’re meeting a lot of strangers constantly, you’re around people you don’t know. There are a lot of exciting, stimulating, but also kind of intimidating things that happen to you in the city. So one of the purposes of architecture for a few thousand years has been to reassure us that when we’re in the city, we’re in a place that is safe, in which transactions occur that we can understand. We’re in surroundings that are coherent, that the outsides of the buildings embellish the public realm and honor the public realm.”

The architecture of the new Senate building fails to do this. It’s a design fit for an office park in Eagan, not St. Paul’s Capital Region.

We Need to Demand Better

We want good urbanism and we want it now. St. Paul is a city. Emphasis on city. It’s about time we started acting like it. What does this mean? For starters, we need to stop being obsessed with parking. It means that we need to create streetscapes worth walking past and we need to build parks and green spaces that are accessible to more than just legislative staff. We need to construct buildings that respectful to their context and that will stand the test of time.

We know how to do this, now we just need to act on it!

Top image: May I please have my $90 million back?