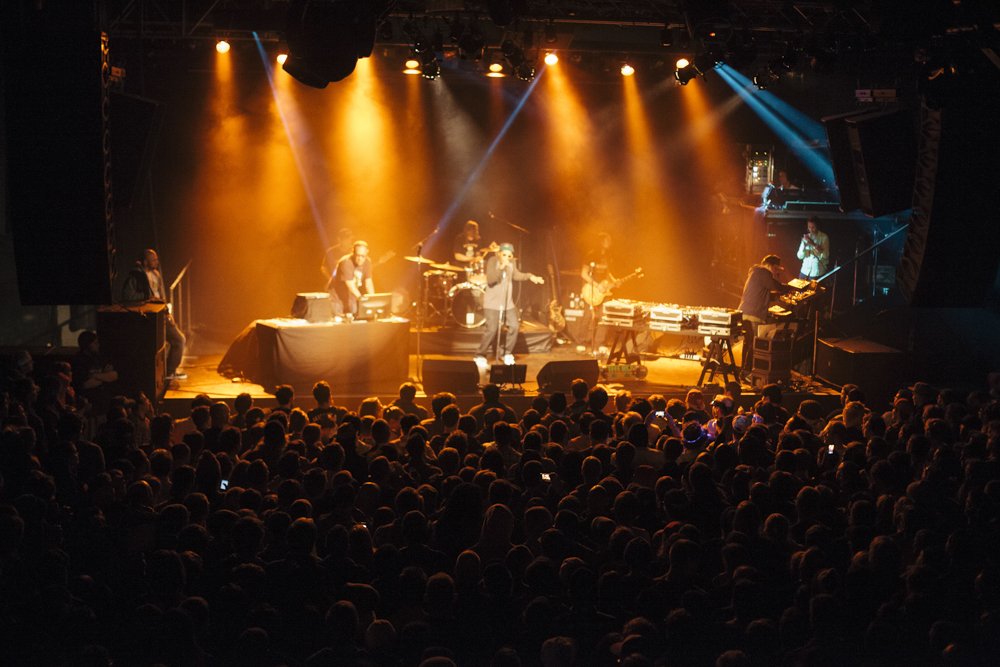 It’s the year thirty-thirty…we came back. We were always coming back.

Sunday, October 20 it began there, in the year 3030, with Del the Funky Homosapien, Dan the Automator, and Kid Koala—the three-headed supergroup, Deltron 3030—leading the sold-out First Avenue mainroom through a hip-hop telling of their epic battles against the corporate oligarchs of the future.

The group’s sci-fi story sprouted from Deltron 3030’s debut eponymous album in 2000, which endures today thanks to its cult status. They dipped into that album to open their set, with a boisterous reception from the crowd.

Despite a vocally muddy start for the yellow sunglassed MC Del, by the third verse of “3030” his tongue had loosened and his free verse poetry flowed uninhibited, like spice melange in a Harkonnen daydream.

When the last hook in “3030” hit, and Deltron 3030’s three-piece backing band (we were one of the tour dates without the 16-piece orchestra) swelled over Dan the Automator’s prerecorded beats and Kid Koala’s scratches, and the lights blared through the fog and swung over the crowd, it was like their ship had come blazing through the clouds in one momentous om.

Welcome back to the future.

“3030” and the next two songs, which are also on Deltron 3030’s first album, went over huge with the herby-smelling crowd.

But then it was time for tracks from their new, second album Event 2, released last month.

Thirteen years passed after their debut. In that time fans bonded and mythologized Deltron 3030 as Event 2 hit delay after delay for nine years. With such a beloved album, with expectations so high, how could Event 2 have fully satisfied fans? Was the First Avenue crowd interested in hearing anything other than that magical debut?

Event 2 was like starting over when fans had grown up so much—when the group had grown so much. Sunday night the songs from Event 2 almost seemed like an afterthought. Not that they should have been–they’re good.

Even with its generally positive reviews, the eight songs Deltron 3030 played from Event 2—like “City Rising from the Ashes” and “Melding of the Minds”—were regarded with wary by the crowd—with slowly swaying shoulders by the crowd. They were performed stunningly–a combination of tight composition and coiled execution–yet the crowd wasn’t as into the new stuff. Bummer.

I wondered if that bothered them. I also wondered about the stretches when Dan the Automator dominated the stage.

Del is the voice and face of Deltron 3030, but during their show, Dan the Automator often migrated to the center, asking between songs whether we’d bought their new album, whether they should play another song, whether we’d seen them on Letterman. He taught us how to sing along with the hook on their new song “Nobody Can.”

Deltron is our hero—if he can’t do it, nobody can.

Deltron 3030 didn’t need to prove themselves to the sold out First Avenue crowd, but it felt like that’s what Dan the Automator wanted. Like he wanted to know we thought their music was still as good, thirteen years later.

It was, but for fans it seemed to because of their old music, not those new creations. It’s unfortunate given their fantastic performance—but not surprising given departures in the new album, both temporal and sonic.

Deltron 3030 gave First Avenue a helluva show, but I couldn’t help but feel as I walked out that most fans just wanted to hear the first album played beginning to end.

It could’ve been a real blast from the past.