In 2014, Minnesota homeowners will experience the largest property tax reduction in twelve years and will begin to benefit from the most significant reform of homestead taxation in at least three decades. The final property tax after refunds paid by the typical homeowner with a median income residing in a median value home will decline by over ten percent from 2013 to 2014 in the majority of Minnesota communities.

This comes as welcome news to homeowners, who experienced rapidly escalating property taxes over the preceding decade. From 2002 to 2013, statewide homeowner property taxes increased by 87 percent—double the rate of inflation. The large drop in property taxes from 2013 to 2014 is primarily the result of tax reforms passed during the 2013 and, to a lesser extent, 2014 legislative sessions, including significant increases in state aid to local governments (replacing a portion of aid cuts enacted over the preceding decade), improvements to aid distribution formulas, an increase in the renter property tax refund, and—most importantly from the perspective of homeowners—an expansion of the homeowner property tax refund in the form of the homestead credit refund. A decline in statewide homestead values relative to other classes of property also contributed to 2014 property tax increases

This report estimates final 2013 and 2014 property taxes after refunds for typical Minnesota homeowners using property value and tax information from the Minnesota Department of Revenue and median owner-occupied household income data from the U.S. Census Bureau’s American Community Survey (ACS). Specifics regarding the data and methods used in and limitations of this analysis are described in the Introduction.

Of course, not everyone has the median income and lives in a median value home. On a statewide basis and for selected cities, this report examines 2013 and 2014 homeowner property taxes under nine different scenarios by combining low, median, and high income levels with low, median, and high home values. In each case, “low” is defined as one-third below the median and “high” as defined as one third above the median. Based on statewide average tax rates, the smallest 2013 to 2014 property tax reduction was $44 (3.9 percent) for a high income homeowner living in a low value home, while the largest reduction was $484 (20.5 percent) for a median income homeowner in a high value home. The chief mechanism for delivering 2014 homeowner property tax relief is the expanded property tax refund, renamed the “homestead credit refund.” This refund is targeted to homeowners who have high property taxes in relation to their ability to pay as measured by annual income. For this reason, homeowners with the greatest 2013 property tax relative to their income tended to receive the most property tax relief in 2014 as indicated in the following graph. 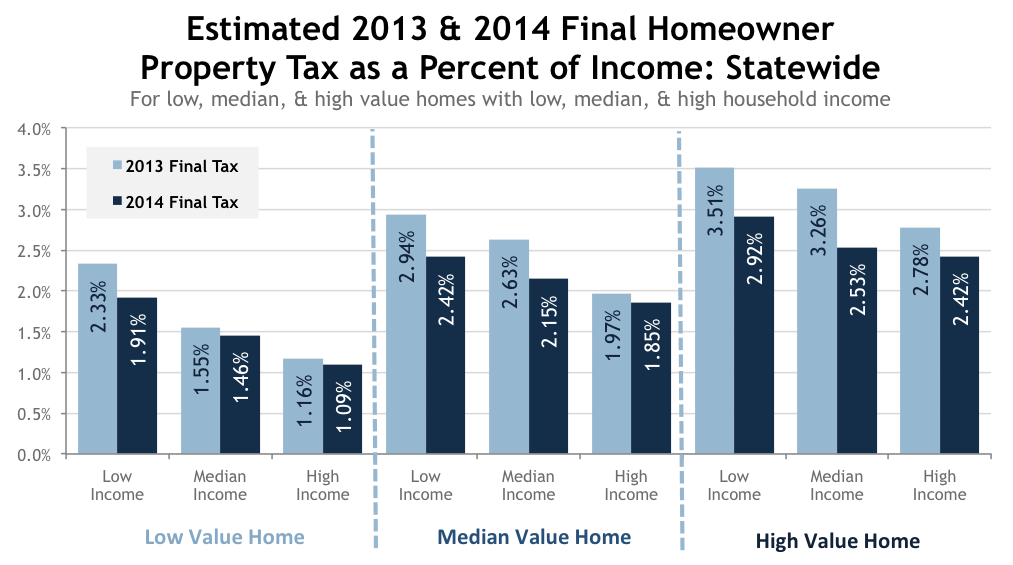 The income-sensitive property tax refund has been embraced by progressives, conservatives, and non-partisan policy wonks as a highly efficient way of reducing tax regressivity and directing tax relief to those homeowners who need it most. The large and widespread 2014 homeowner property tax reductions documented in this report were primarily due to the expansion of this program in the 2013 and 2014 tax acts in the form of the homestead credit refund.

“In an era when good public policy often falls victim to partisan gridlock, this outcome is something that Minnesotans of all political persuasions should recognize and celebrate, “ said Jeff Van Wychen, Minnesota 2020 Fellow and Tax Policy Director. “The new homestead credit refund is the most important homeowner property tax relief in last three decades and it is important to protect and preserve this accomplishment in coming years.”