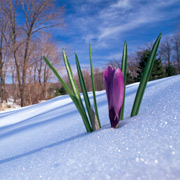 Amy Doeun, partner in Crazy Boy Farm near Rush City, and Mhonpaj Lee, organic farm manager of Mhonpaj’s Garden Farm in Oakdale, look at their still housed vegetable plants and know this April’s cold, snowy weather is hurting the best made plans for their farms, other local vegetable growers, and for all of their customers.

“We can’t let these plants sit indoors when they should be planted without losing a good amount of them,” said Doeun, who with her husband Proeun Doeun moved Crazy Boy Farm from Marine-on-St. Croix a couple of years ago and is just getting started as a Community Supported Agriculture (CSA) business near Rush City.

In this, the second of a two-part series, Minnesota 2020 looks at how this winter-that-will-not-quit is exacting a toll on a large number of Minnesota families engaged in small scale vegetable growing.

Minnesota 2020 concluded in part one that conventional farmers that plant huge corn, soybean and other major field crops are probably benefiting from the wet spring as it recharges topsoil and, hopefully, subsoil moisture for the coming growing season. What’s more, Round Lake farmers Gary Ling said most of these mid-sized to larger commercial farmers now have equipment that will quickly prepare and plant fields once the soil dries and soil temperatures rise.

Good soil conditions are important for small vegetable farmers as well. But many of these growers, whether they sell through Farmers’ Markets or direct to customers from Community Supported Agriculture (CSA) farms, are facing timeliness pressures different than growers of corn, soybeans, wheat and sugarbeets.

Regardless if the growers sell at Farmers’ Markets, to local institutions or to CSA customers, the delayed spring will most likely stack up different produce crops so all the early season crops will hit the market at once, she said.

Also, weather delays customers from signing up for CSA contracts. “People don’t think about fresh vegetables and their CSA contracts when they look out the window and see snow on the ground,” Lee said.

The extended family Mhonpaj Garden Farm has acquired land sufficient to support 300 CSA members (usually families), but only seven are under contract so far. They, and other similar growers, are promoting incentives to nudge potential customers to think spring. The Oakdale family, for instance, offers a free CSA membership to anyone who recruits 10 other family members or friends.

This being the backside of April, the timing of produce coming to market is almost certain to be delayed and bunched with a second wave of planned crops. Also, if weather causes a drop in CSA memberships this year, local fresh produce markets will be flooded with surplus production that could also hurt growers and distort markets.

For these reasons, Dave Reggenkamp is relieved he closed his Gaia Garden Designs LLC of rural St. Cloud this winter. A fairly large operation with 3,000 square feed of greenhouse space, Reggenkamp estimates he would have spent at least $4,000 on heating costs just keeping indoor plants alive for the past four weeks.

Under his past business schedule Reggenkamp would have received 8,000 onion sets two weeks ago, another 8,000 sets last week, and 8,000 more would arrive this week. “They would be rotting in the flats before we could get them in the ground,” he said.

Nick Olson, a farmer at Litchfield and Farm Beginnings program organizer for Land Stewardship Program, said sunlight and overnight temperatures have been a serious problem for most Minnesota vegetable growers.

Talking with organic growers around the state, he said, most complain that they’ve been out covering up plants in greenhouses and smaller, protective areas called “high tunnels” to keep plants alive overnight. His area had temperatures drop into the teens overnight during the weekend.

These weather-related problems this year point out two overwhelming market conditions holding back the local foods industry. As Mhonpaj Lee observes, it is difficult to “plan around unstable spring weather.” And as Reggenkamp and LSP’s Olson further noted, much work remains to find better logistics and marketing systems for these growers.

Land Stewardship Program researchers continue work on systems, Olson said. More help is needed from USDA, Minnesota Department of Agriculture and University of Minnesota researchers, among others, to bring steady, predictable supplies of fresh, healthy local foods to our tables.