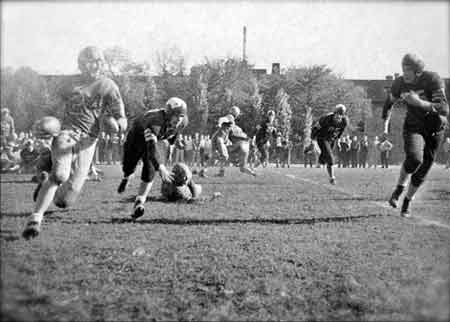 A De LaSalle halfback skirts right end in this photo from a 1949 home game versus Blake School.

After a nearly five-hour-long meeting on August 8, the Minneapolis Heritage Preservation Commission (HPC) rejected DeLaSalle High School’s plan to build an athletic field on Nicollet Island. The commission ruled that the facility does not fit the historic district of which the island is a part.

On both its own and city-owned land, the school hopes to build a regulation-size football field, soccer fields, a press box, concession area and bleacher seating for as many as 750 people, to be used by both the private institution and the Minneapolis Park and Recreation Board. Nicollet Island residents, environmental organizations and preservationists oppose the plan.

Dozens of people from both sides of the contentious issue testified during a lengthy public hearing in City Council Chambers at City Hall, and, in the end, the HPC denied DeLaSalle’s request for a “certificate of appropriateness,” as recommended by the city’s planning department.
Mike O’Keefe, vice president of planning for DeLaSalle, said the school will appeal the decision. Such an appeal would be heard by the City Council.

Debate focused largely on the closure of the eastern half of Grove Street, which has existed in its current alignment since 1866. The proposed field would be built on top of that alignment.

The commissioners agreed with consulting planner Michael Orange, who stated in his staff report that the street closure “will constitute an adverse visual effect on the [St. Anthony Falls Historic] District” by eliminating the historic view and street alignment.

The report also recommended a more extensive plan for assessing potential archeological resources that might be unearthed by the project.

In their final decision, commissioners went even further, stating that “many aspects of the project, including siting, height and materials are incompatible with [historic district] guidelines and would have a lasting adverse effect on the district.” Those aspects involve the height and illumination level of the facility’s lights, stucco siding, imitation stone and the fact that the stadium would be located on historic Grove Street.

The HPC found that measures proposed by DeLaSalle to preserve some views and honor the street’s history – including a large opening through the bleachers to allow a view along the line of the vacated street, as well as paving, landscaping and historic plaques to mark Grove Street – “would not… reverse the adverse effects to the district.”

During the public hearing portion of the meeting, representatives from DeLaSalle addressed the Grove Street issue and lobbied for the project by highlighting the school’s long history, the success and diversity of its student body and the facilities’ benefits to the both the public and DeLaSalle.

“We acknowledge that the Grove Street view is important,” said Eric Galatz, an attorney representing DeLaSalle. “We ask that the commission find it not as important as an athletic field for the children of Minneapolis and De LaSalle.”

Judd Reitkerk, director of planning for the Park and Recreation Board, also spoke in favor of the project, which the Park Board has approved in March.

DeLaSalle trustee and former City Councilmember John Derus urged the commission to consider not only the physical elements but also the “human resources” involved in the project. Derus presented a bound copy of Minneapolis’ first city plan, adopted in 1917, which he said recommended that Nicollet Island be used as a park, rather than for residences.

Tim Keene, chair of DeLaSalle’s board of trustees, called the 108-year-old institution “the longest-running resident of Nicollet Island.”

Speaking later in opposition of the project, Christine Vicken, who recently bought a condo on Nicollet Island, claimed that the island’s “residential neighborhood” is the oldest continual use. By the end of the 19th century and the island’s era of historic significance (1866 – 1898), large mansions gave way to the smaller, single-family homes and other residences now in existence.

Others speaking in opposition to the project represented the Minnesota Historical Society, National Park Service, the Sierra Club, Friends of the Mississippi River and a coalition of other organizations called Friends of the Riverfront. Several speakers stated that the city and DeLaSalle did not adequately consider alternative sites for the field.

The Sierra Club’s Ben Zimmerman claimed that the project would remove 30 trees planted in 1956 to commemorate the city’s centennial.

D’Nardo Colucci, a Nicollet Island resident and optical engineer, challenged the planning staff’s original finding that nighttime stadium lighting would have no adverse effect on the on the historic district. Colucci likened the proposed field, when lit at night, to “a 65,000-square-foot flashlight, reflecting three times [the amount of light as] the Hennepin Avenue Bridge into the night sky.”

The commission included lighting in its list of potential adverse effects, and agreed with staff findings that traffic, parking, noise and loudspeaker noise do pose a significant negative impact.

Judith Martin, professor of geography and urban planning at the University of Minnesota, presented aerial photos and a De LaSalle yearbook that she claimed shows DeLaSalle actually had a football field in the first half of the last century. “They gave it up by expanding their building onto the football field,” Martin said.

Responding later in an interview, DeLaSalle’s O’Keefe said that, based on old school yearbooks and newspapers, one or two games might have been played on a 90-yard field, but that the school didn’t have the space to build a regulation field at the time. Building expansion in the 1960s did not affect the field, O’Keefe said.

Like others who lobbied for the project, O’Keefe tried to put the project – and its preservation roadblock – into a larger perspective.

“When all is said and done, people have different opinions about the project. We believe it is in the best interest of the city and school to provide facilities and programs for the kids and their families.”

In the scope of historic preservation, however, the HPC was unanimous in its decision that many elements of the project do not fit the guidelines under its purview.