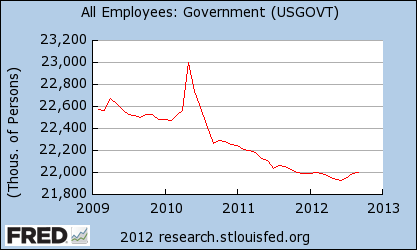 Listening to Paul Ryan make the case for the Republican ticket last night, I was impressed all over again by how absurd it was. Ryan repeatedly positioned spending and the deficit as our biggest problem. That’s a foolish position that would cripple our economy at a time when it’s still very fragile.

We need to focus on the economy above all else. Now is the worst possible time to slash spending and send us sliding back into a recession. In fact, the weakness of our recovery so far is partially due to major cutbacks in government workers. If state and local governments had not slashed their workforces, we’d have over half a million more people working today.

Besides, much of the current deficit is the result of the recession itself. Because of the weak economy, tax revenues are down, while spending for programs like food stamps is up. Fix the economy, and those problems go away, reducing the deficit sharply in the process. Try to tackle the deficit first, on the other hand, and you hurt the economy, making the deficit still worse.

I also can’t help but notice that the Republicans’ concern for the deficit dates back exactly to January 20, 2009. Before Obama was sworn in, they were totally fine with the deficit. Paul Ryan himself voted to put the Bush wars on the nation’s credit card, approving trillions of dollars in spending without a method of paying for them.

The deficit is a convenient hobby horse for inaccurately attacking President Obama, but that’s just about all it’s good for. It’s not good for our economy, it’s not good for the middle class, and it’s not a smart priority for a country that needs to add millions of jobs. Romney and Ryan want you to believe they’re the right team for the job, but they don’t even understand that what we need more than anything are jobs.