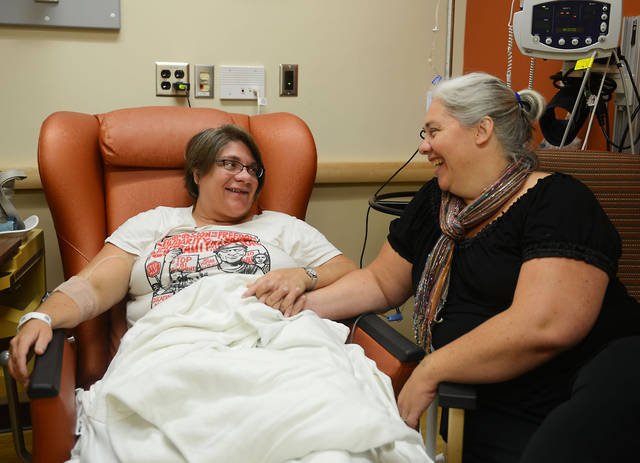 Steff Yorek visits her partner Jess Sundin during one of her treatments at the Phillips Wangensteen Building on East Bank, Tuesday morning. Formally married in Washington, their marriage will be legally recognized in Minnesota on August 1st. (Photo by Bridget Bennett)

For years, Steff Yorek has had to pay extra taxes for her partner, Jess Sundin, to be covered by the University of Minnesota’s employee health care plan.

But soon, that may change.

The University is awaiting updated federal and state guidelines for how to change employee benefits after same-sex marriage was legalized in Minnesota in May and the Defense of Marriage Act was struck down by the U.S. Supreme Court in June.

Starting Aug. 1, same-sex couples in Minnesota will be able to marry, and same-sex marriages performed in other states will be recognized for the first time.

The University is asking employees whose same-sex marriages will be newly recognized on or after Aug. 1 to submit documentation so it can prepare to make changes to their benefits plans.

Currently, the University offers the same benefits to employees with a same-sex domestic partner as it does to married heterosexual couples. But employees with same-sex partners have to pay additional taxes on their benefits.

Because the Internal Revenue Service doesn’t recognize same-sex partners as dependents, their benefits are considered to be taxable income.

When the University changes its benefits system to accommodate the federal and state changes, this tax will be lifted, said Dann Chapman, employee benefits director for the University’s Office of Human Resources.

The University won’t be able to change its system until the federal government issues its regulations, which are expected in September, Chapman said. After the federal regulations are released, he said, the state can produce its own policies. Minnesota employers — like the University — have to wait for both processes to finish before they can lift the tax for employees with same-sex marriages.

Chapman said the University’s new system could be in place by November, when employees can make changes to their benefits plans.

The University will notify employees about the policies and programs affected by the law change, he said.

Because her partner is disabled and visits the doctor every three weeks, Yorek said it’s difficult to meet the cost of her medical bills with the additional tax
burden.

Yorek said this additional tax is based on $6,000 more income than she actually gets. She said she would rather put those tax dollars toward co-pays and prescriptions for her partner.

Because Yorek and Sundin were legally married last March in Washington state, she said she wishes the University would award spousal benefits beginning Aug. 1 instead of waiting to make changes.

“Now, my partner is simply a spouse, no different than any other spouse,” she said. “I’m kind of frustrated because the University could just decide that they’re going to follow federal and state law and recognize [my marriage], and they will figure out the administrative glitches later.”

In 2008, the University Senate passed a resolution asking the administration to find a way to compensate employees paying the extra tax.

But the action was shot down by former University President Robert Bruininks, who cited budget shortages.

“It’s about time,” said speech, language and hearing sciences professor Benjamin Munson, who was chair of the University Senate’s Equity, Access and Diversity Committee at the time.

Munson said he and his partner had a civil union in New Zealand in 2008. Though they’re getting married in the Twin Cities in about two weeks, Munson said some people in same-sex domestic partnerships who are currently receiving University benefits may not want to get married.

“I’ll be interested to see whether or not other people who are using these benefits are going to feel like they’re being railroaded into getting married,” Munson said.

Because health care costs are going up, he said, the University should work to lift the extra tax on same-sex partners’ benefits.

Although eliminating the tax will be the most significant result of the state and federal changes, employees with same-sex marriages will likely see other positive outcomes.

For example, employees won’t have to designate their same-sex spouses as their primary beneficiary anymore, Chapman said — instead, that designation will happen automatically.

Same-sex couples will also have less paperwork to fill out when enrolling in benefits plans, Chapman said.

“We will be able, finally, to treat them the same as anyone else in terms of how we process their benefits,” he said. “… And that’s a big win, I think.”

Though the University has done what it can to offer the same benefits to employees with same-sex partners as it does to other employees, Chapman said, they’ve been limited by government regulations.

“To have this barrier going away is something that’s very much welcomed by the University administration,” he said.

A lot financial changes are on the horizon for same-sex couples, but the biggest change might be the social one, Munson said.

“The haters can hate, but I’m just as married as them,” he said, “or least I will be a week from Friday.”