While some conservatives have spent the last few months pissing and moaning about how the proposed social studies standards spend too much time “focusing” on the treatment of indigenous people in the United States’ westward expansion, the 150th anniversary of the largest mass execution in American history is a cold slap of fresh air to that ideological battle.

Along the way, more riders have joined the Dakota 38 Wokiksuye Memorial Ride with perhaps 100 riders or more expected in Mankato to commemorate the 38 Dakota hanged on Dec. 26, 1862.

On midnight on Christmas Day, Dakota runners will leave Fort Snelling, site of the internment camp where Dakota were held following the war.

At about 10 a.m. Dec. 26, the riders will ride from Land of Memories Park, down Riverfront Drive to Reconciliation Park, across from the library — site of the largest mass execution in U.S. history. . . .

During a ceremony at Reconciliation Park, a new Dakota memorial will be unveiled, listing the names of those executed.

In Remembrance for 38 Dakota warriors set, the Rochester Post Bulletin’s Jay Furst reports that a fire will be lit at midnight:

At midnight on Christmas, a fire along the Minnesota River, where the Blue Earth River empties into it, will be lit and the vigil will begin.

By Wednesday morning, when the fire has burned out, the riders on horseback, dozens of them, will lead a long procession to a tiny, angular piece of land called Reconciliation Park in downtown Mankato, wedged between the railroad, a four-lane street and a highway bridge. The river is only visible through a gap in the flood wall.

And at 10 a.m., they’ll remember what happened in that place 150 years ago to that moment, when 38 Dakota warriors were hanged.

This happened in the heart of Mankato, and it remains alive as an injustice in the hearts of Dakota people.

But Mankato won’t be the only place where the execution is remembered. The Yankton Press & Dakotan reports in Anniversary Of Executions To Be Recalled In Santee:

This Christmas while many are sipping eggnog, sorting through Santa’s loot and celebrating Jesus’ birth, the Dakota people in Santee will be passing the season in a different spirit of remembrance.

On Dec. 26, 1862, in Mankato, Minn., 38 Dakota Sioux Indians were hanged in the largest mass execution in America’s history.

“It’s a piece of the nation’s past that not many people even know about today,” said Roger Trudell, chairman of the Santee tribal council. “Almost all of the people in Santee are direct descendants of the prisoners and those that were executed in Minnesota.”

To commemorate the event and honor the deceased, a day-long memorial will be held in Santee, Neb., on Wednesday.

Though the Santee tribe has long-honored the occasion with commemorative activities, Trudell added that this is the first year that horses will be included in the event.

“We are going to have the horses dressed in regalia with drapes that commemorate each one of the men that were executed,” said social services director Misty Thomas.

Read the rest at the Yankton paper. 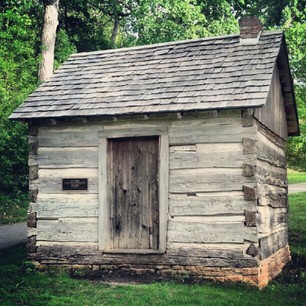 While Bluestem’s editor learned as a child–from family and school–about the execution, the concentration camps at Fort Snelling and elsewhere, the deportation of the Dakota people from the Minnesota River Valley land that they owned, and the hunting down for the bounties on the heads of those fugitives who remained–many Minnesotans don’t know this history.

A recent episode of This American Life, Little War on the Prairie, explored why so few Minnesotans knew about the war and its terrible consequences for Dakota people.

It would be unfortunate if it were buried again. The standards aren’t perfect–but neither should they be a whitewash.

The Mankato Free Press reports about the aftermath of the 1862 War for most Minnesota Dakota people in Remembering the Dakota War: After the hangings, more suffering and deaths.

Photos: About 1,600 Dakota women, children and the elderly were held at a concentration camp on Pike Island near Fort Snelling. MSHS image (above); The Ott cabin in Sibley Park, built on another location in Blue Earth County in the 1850s by some of Bluestem’s family on her father’s side (below).