After a decade of cuts in real (i.e., inflation adjusted) per pupil state support for K-12 education, the FY 2014-15 budget passed during the 2013 legislation session provided a significant increase in state aid. The increase in state funding projected to occur from FY 2013 to FY 2015 under the recently approved budget is sufficient to replace about one-third of the real per pupil school district aid loss that occurred over the previous decade.

A new Minnesota 2020 report—“Minnesota School District Finances: FY 2003-FY 2015”—examines trends in total school district operating revenue, property tax levies*, and state aids** over a thirteen year period, including projections based on the new state budget approved during the 2013 session. All amounts presented here and in the report are expressed in constant FY 2014 dollars.

However, in subsequent years per pupil state aid declined steadily, a victim of the “no new tax” fiscal agenda that dominated state budget decisions, while school property taxes soared. State support for K-12 education bottomed out in FY 2012, the first year under the biennial budget imposed by the conservative-dominated legislature after the 2011 state government shutdown. From FY 2003 to FY 2012, state aid to school districts declined by $1,812 (18.0%) per pupil, while property tax levies increased by $966 (135.9%). Because the increase in levies was not large enough to replace the drop in state aid, total school district revenues declined by $846 (7.9%) per pupil. 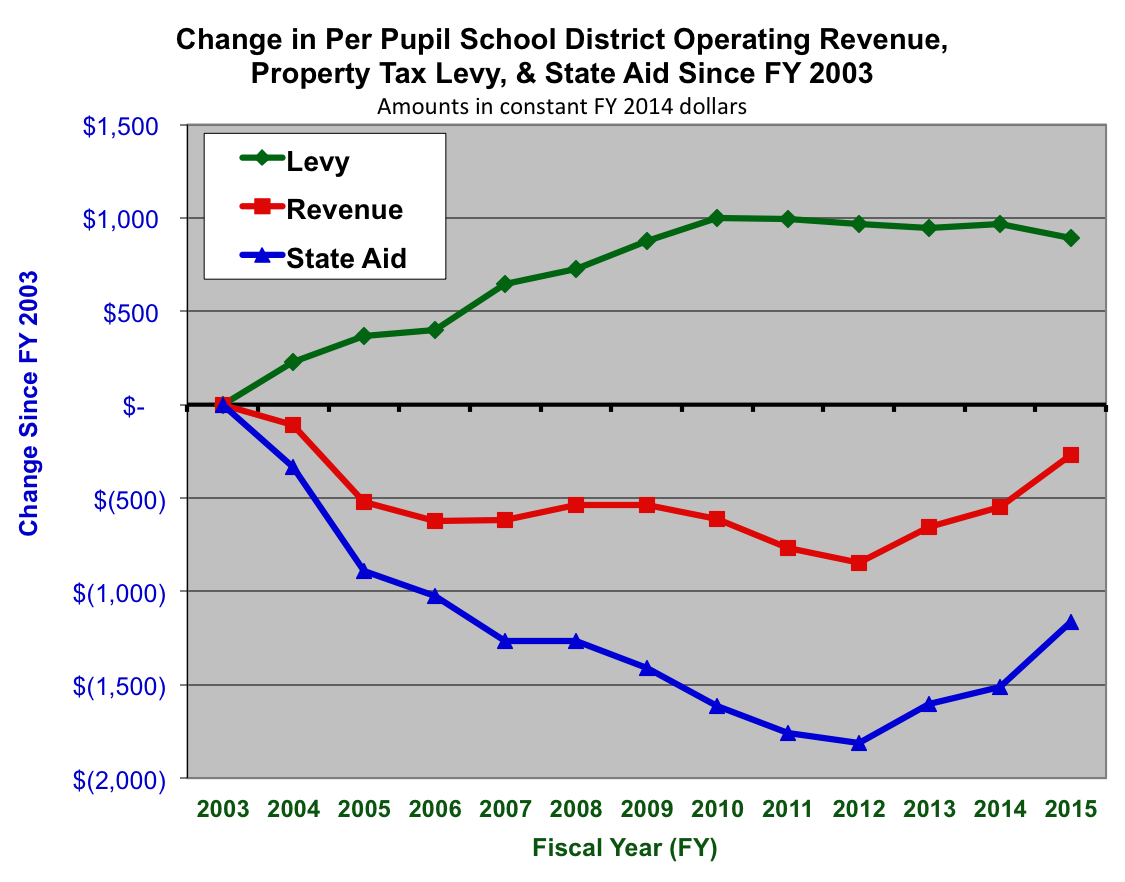 To make matters worse, several times during the period from 2004 to 2011 the legislative enacted school aid payment shifts which delayed state aid payments to school districts, which had the effect of depleting school budget reserves and forcing some districts into short-term borrowing. The negative impact of these payment delays are not reflected in this analysis.

The turn-around in state support for public education began in FY 2013† and gained momentum in the FY 2014-15 budget enacted during the 2013 session, providing a boost to school district budgets and relief to property taxpayers. From FY 2012 to FY 2015, state aid to Minnesota school districts is expected to jump by $646 (7.8%) per pupil, while levies are projected to fall by $72 (4.3%) per pupil; total revenue per pupil is expected to increase by $575 (5.8%) per pupil. In addition, the repayment of school aid payment shifts enacted in previous years helped to bolster school district finances.

The projected increases in state support for education is badly needed, but insufficient to completely replace the decline in aid that occurred over the previous decade. For example, the projected increase in state aid from FY 2012 to FY 2015 is sufficient to replace just 35.7 percent of decline that occurred from FY 2003 to FY 2012. Furthermore, even after these aid increases, total per pupil school district revenue in FY 2015 is still projected to be 2.5 percent less than in FY 2003.

In the vast majority of districts, the projected aid and revenue increases will not be sufficient to replace the aid losses over the preceding decade. Projected FY 2015 per pupil state aid will be less than FY 2003 aid in 318 districts (containing 97.8% of enrollment), while projected FY 2015 per pupil revenue will be less than FY 2003 revenue in 224 districts (containing 70.8% of enrollment).

While total real per pupil state aid and total revenue remain significantly below their historic peaks, the budget enacted by state policymakers during the 2013 session made a major stride to restoring a decade of school funding cuts. The new Minnesota 2020 report shows that this is true not only on a statewide basis, but for the vast majority of Minnesota school districts.

* While these projections estimate likely levies, they were done prior to the recent election, and are subject to further updates. Minnesota 2020 will release updated figures when levy, revenue, and aid numbers are finalized through the Department of Education.

**All information in the report and this article is based on the newly released 13 year revenue trend spreadsheet from the Minnesota Department of Education (MDE). The data in this spreadsheet excludes debt service revenue, but includes virtually all school operating revenue. “Revenue” as used in MDE’s 13 year revenue trend spreadsheet is equal to the sum of levies plus state aid. See the Minnesota 2020 report for other technical notes regarding the analysis presented here.