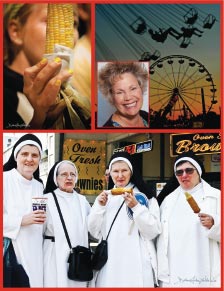 The last fireworks explode. The grandstand concert empties. It’s time for the corn roasters’ nightly dance. The young food workers cover the hot coals with metal sheets, climb onboard, and jump and dance as the embers cool beneath them.

Debra Fisher Goldstein calls them the “huskers gone wild.” She has photographed this ritual for years. She defaults to a wide-angle lens, a natural inclination to capture this chorus line of kids dancing in their yellow, white and green uniforms, covered with soot from working all day. Yet she is bored.

Then she remembers what a teacher once told her: Take a different approach, look for a different angle. So Goldstein begins to look. And there she is – the girl holding a roasted cob of corn, her fingernails painted like little yellow kernels.

Goldstein was a girl in Ohio when she fell in love – with the county fair. Later, living in California, her love was the Los Angeles County Fair. When she moved to Minnesota in the 1980s, she fell for the Minnesota State Fair.

You’ll find her there with her Nikon camera. “Oh, yes, many times,” Goldstein says. “Oh, yeah.” She goes as it’s built. She returns again and again during the 12-day run. She goes back when it’s taken down. “Occasionally, I go in the winter as well.”

Goldstein mostly hangs out, blends into the crowd and watches. The photo of the girl clutching the corncob, on this month’s cover, was one of those “special moments” she waits for. ” I admire how everyone finds ways to express their creativity – in little and big ways – every day,” she says.

Goldstein expresses her own creativity with a camera. She credits the State Fair with starting her love affair with photography. Twelve years ago, she brought her basic camera to the fair and started to see through a new lens.

“I saw relationships and patterns and colors [in new ways],” she says. The red-haired boy outside the cattle barn with his red cow, a brown-haired girl with her brown cow. “I mean this in the nicest way – My God, the kids looked like their cows!”

But Goldstein was disappointed that the photos did not capture what she saw or felt. Thus began her exploration of the art of photography. She took community education classes, studied at the Minneapolis Photo Center and Minneapolis Community and Technical College, joined local photographers’ forums, and traveled to workshops in Colorado, Maine and New Mexico.

She has loved her day job at Gold Fish Communications, her own company, where she has matched messages with visuals for more than 20 years. “I loved that work, I still do,” she says. But somewhere along the way, she says, “I started to see and feel what touched me.”

What touched her – through her camera lens – were human connections, joy, humor, colors, patterns and shapes.

“I love the communities that we create and how we connect with each other,” she says. “Where else better to find that than at the State Fair?”

One of Goldstein’s early photos that remains one of her followers’ favorites is titled “Summer is Here, Nun too Soon.” She says it’s technically flawed – “not as good as I am now” – but she takes comfort in what an instructor had told her – a great moment trumps any technical concerns. Seeing four nuns in full, white habit eating something fried on a stick, Goldstein snapped their photo and asked them how they liked their corn dogs.

They scolded her: “This is not a corn dog. This is deep-fried corn on the cob.”

“I felt like I’d been slapped on the wrist,” Goldstein says.

Scrambling to recover, she timidly asked if they had tried the deep-fried ice cream. They immediately asked for directions and off they went. “I was scared of them.”

Goldstein’s eye is drawn to images vivid and big:

She continually raises the bar for herself, and at times feels a sense of panic: Will she get any good shots this year?

“I need to remind myself to relax, to trust myself and let the fair come to me,” Goldstein says. “You have to let it unfold in front of you, let life happen and always keep your eyes open for it.”