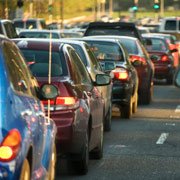 American urbanists have been cheered by persistent stagnation in rates of motoring going back years before the Great Recession, but there are new hints that the dreams of so-called “car-haters” may not be fully realized. The auto industry is booming again, with August’s sales expected to top any month in the past 11 years.

Even President Obama’s transportation secretary, Anthony Foxx, just trumpeted in a news release that U.S. driving this summer hit a level not seen since 2008. “More people driving means our economy is picking up speed,” Foxx noted. “It also means we need to increase our investment in transportation to meet this demand, which is why Congress needs to pass the president’s four-year, $302 billion GROW AMERICA Act.”

This is certainly an argument aimed at autocentric congressional conservatives, who nonetheless have blocked robust federal spending on surface transportation. They might loosen the purse strings if transit funding were divorced from the highway bill, but progressives, as well as sound overall mobility policy, stand against that.

Besides, despite the fraction of federal fuel taxes that support transit and nonmotorized modes, drivers get so much help from government that a return to our old motoring ways should surprise no one. Tanya Snyder at Streetsblog USA offered a nice listing on tax day last April of all the regressive breaks available for driving, including the real reductions on autopilot over the 21 years since the U.S. levy at the pump was adjusted for inflation.

Compared with most of the industrialized world, our fuel taxes are practically negligible, and that helps explain why Americans can rack up the miles, at fuel prices per hours worked at low levels not persistently seen since the early 1980s, according to research highlighted in Fortune. Some of the supposed demographic causes of driving’s decline may also be petering out.

“While it’s true that urban areas have been growing faster than the suburbs over the last decade or so, it looks as if that trend may be starting to reverse,” writes Fortune’s Chris Matthews. “Finally, while Millenials [the rising generation that so far has disdained driving] are now America’s largest demographic group, we have yet to really feel their presence in the economy. The single most common age in America today is 23, an age where it’s much easier to get by living in a city without a car.

“As Millenials start to settle down, get married and have children, it’s quite possible that their relative aversion to suburban life and cars will soften a bit. There’s plenty of reason to believe that America’s love affair with the car is beginning to cool, but it’s probably a bit early to declare this case closed.”

Good points, but we need to remember the often-overlooked reality that location and transportation choices don’t occur in a free-market vacuum. Government policy will continue to tip the scales. For decades, it has encouraged more and more miles behind the wheel. Shifting subsidies away from driving, parking and sprawl could nudge us in a more sustainable direction.