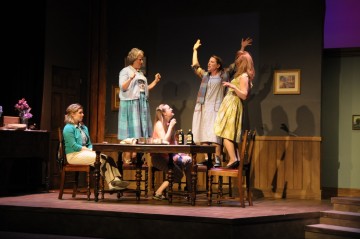 When asked to review Deal! The Musical, currently playing at the Ritz Theater in Northeast Minneapolis, I enthusiastically agreed. Looking at the website I found this decription: “…Added to the mix is a colorful group of friends and family who join them for their weekly poker games. Dreams and ambitions collide with small town realities as everyone deals with love and life in this spirited yet touching look at how one family holds on tight to their love for one another.”

Being the eternal optimist I envisioned my own family card gatherings—almost always with three generations represented where the oldest would gently encourage and teach the youngest to become life-long card players. There would be small talk, but the center of the game would be an honest love of family time and, of course, playing cards. I also grew up on a farm so I really thought this would be a show I could relate to. What I experienced at the Ritz was a daily struggle with the hand that had been dealt to them figuratively and literally and a family dynamic that was not familiar to me.

The story takes place in a small town in Minnesota and centers around Art (Jon Andrew Hegge) and Elsie (Laurie Flanigan-Hegge), a farming family who are forced to move into town after failing financially on the farm they were renting. They are joined for their weekly card game by Art’s unemployed brother and his alcoholic girlfriend and by Pearl (Catherine Battocletti), their recently widowed friend who brings some semblance of normalcy and compassion to the table.

Their older daughter is working and yearning to go to college and improve her life. This causes conflict between her and Elsie, who expresses in song (remember this is a musical!) her lack of understanding of this dream when she feels her children already have “More Than Me.”

The family is Lutheran, and the second daughter falls in love with and eventually marries “My Catholic Boy,” providing the opportunity for the inclusion of several jokes about the Catholic/Lutheran differences and Art’s refusal to attend the wedding. While I have seen and enjoyed several of the Church Basement Ladies shows, that franchise treats the perceived differences between Catholics and Lutherans with gentle humor; what I heard in Deal! was dialogue that was more mean-spirited and not funny.

I did feel the musicians were very good and all of the singing voices were strong, but the lyrics were often hard to understand possibly because of the close proximity of the musicians. The set designer (Chad VanKekerix) chose to leave the back of part of the scenery open with the band sitting in partial view of the audience. I found this distracting, as though the placement was an afterthought.

Deal! The Musical is a light-hearted title, but a Debbie Downer show. Because I was looking for light entertainment, I chose to not stay for the second half. If you choose to go and see how it ends, be prepared for more angst than card-playing.