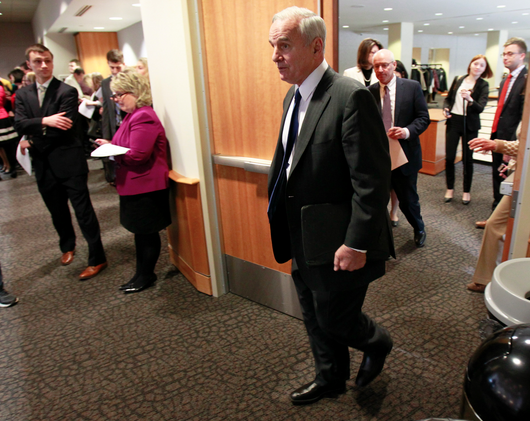 The plan would increase state spending by roughly $2.5 billion more in 2016-2017 over the current biennium and leave $35 million of the projected surplus unspent.

“I’m placing my priority on the future of Minnesota,” Dayton said during a morning news conference.

The proposed spending, he said, is aimed squarely at closing the state’s achievement gap between white and minority students by doing more, earlier, to place less of a burden on the state’s schools to solve the disparities.

Included in the governor’s budget are:

Daudt called the governor’s proposed $42 billion budget “unsustainable,” though he declined to say what level of spending his caucus would support over the next biennium. House Republicans are expected to release a budget proposal of their own in the coming weeks.

The governor’s budget proposes no new general tax increases, though it calls for removing what he termed “corporate tax loopholes” and modifying the state’s railroad-related property tax laws to generate more revenue for safety-related rail improvements across the state.

Notably, the governor’s budget would not spend more on nursing homes nor long-term care programs. Nor does it include more funding for the Minnesota State Colleges and Universities system — with Dayton saying he would propose to withhold additional funding due to an ongoing faculty dispute. It would also cut funds to the Minneapolis Parks Board, which has held up progress on the planned Southwest Light Rail line in the west metro.