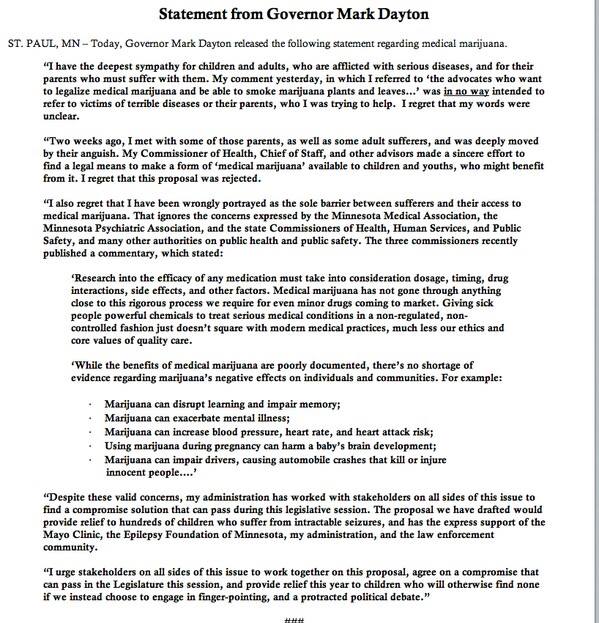 As the photo above illustrates, Governor Dayton has backed off statements Bluestem examined in Medical pot: Mark Dayton feels your pain, but thinks you people with PTSD are probably faking it.

We weren’t the only critical eyes reviewing his remarks and so he has walked back a couple of his remarks.

UPDATE: It’s worth noting that Dayton only apologized to victims of “terrible diseases” and their parents, not to people living with pain and post-traumatic stress disorder (PTSD). They, apparently, still just want medical marijuana to get high [end update].

Reaction in the press to today’s statement? The Google news hit from Fox9 News is Minnesota governor’s medical marijuana flip-flop – KMSP-TV but the click leads to a different headline, MEDICAL MARIJUANA: Gov. Dayton’s ‘regret’ and latest stance. The station reports:

“My comment yesterday, in which I referred to ‘the advocates who want to legalize medical marijuana and be able to smoke marijuana plants and leaves…’ was in no way intended to refer to victims of terrible diseases or their parents, who I was trying to help,” Dayton said in a statement. “I regret that my words were unclear.”

The fact is, the latest proposed legislation removed smoking and even offered to add penalties for those who would smoke medical marijuana.

Rep. Carly Melin, assistant majority leader and the chief sponsor of the bill in the House, said she believes she has the votes to pass H.F. 1818 in both the House and Senate this session.

The real blockade isn’t the legislature, as the Star Tribune implied yesterday, but Dayton’s promise to law enforcement. As Fox9 reports, the families backing HF1818 are firm about this point:

The Associated Press reports in Keep seeking compromise on medical marijuana this year:

One day after Gov. Mark Dayton appeared to discount any legislation on medical marijuana this year, he is urging advocates and legislators to keep talking in search of compromise.

Dayton says he has the “deepest sympathy” for children and adults with serious diseases who find relief in marijuana.

On Tuesday, Dayton had said his proposal for studying one aspect of medical marijuana appeared dead due to lack of support from people who want to see medical marijuana made legal. He said he was disappointed but would work for it next session.

On Wednesday the governor said he’d like to see a compromise that helps children. And he says it’s wrong to portray him as the only barrier to people getting medical marijuana.

That’s some soft landing for a flip-flop.