The conversation actually began the afternoon before. The seven of us who traveled to the Panjshir Valley had hurried back so we could attend a session on transitional justice followed by a meal at the home of our speaker. I confess I was somewhat drowsy for the PowerPoint presentation by Yonos Akhtar and a younger spokesperson (whose name I failed to record) from Physicians for Human Rights. Talk of amnesty laws vs. prosecution of war crimes made me reflect on our own situation back in the US. How does on balance the need for justice and accountability against the other compelling need to “move forward” and not wallow in the past?

I have joined public vigils at the Federal Courthouse in Minneapolis and at the University of St. Thomas Law School over the past several years demanding prosecution of Americans who paved the way for practicing torture on those detained in the tumultuous years following the September 11th attacks. Certainly part of my passion has aspects of retribution and anger at how the general public was manipulated and abused by the fear-mongering by politicians for political gain – but most of all, I feel that if Cheney, Bush, Yoo, Delahunty, Rumsfeld, Rice, and others aren’t held accountable, it will be easier to cross those illegal and immoral thresholds again and again. Since these perpetrators (or should I say perp-e-traitors?) are now out of office and at least some of the post-9-11 paranoia has subsided, I don’t feel an imminent threat of these policies being re-instituted although Obama’s promise to close Guantanamo still is glaringly unfulfilled.

However, there seems to be a palpable fear among the older and more middle-class Afghans we met with – a real fear of a resurgence of the Taliban and other brutal warlords if the US pulls out too precipitously. After the presentation, Yonos said he would transport us, four or five at a time, to his nearby home for the dinner. En route, he told me he wants the US Military to remain (he didn’t say for how long) because otherwise the Taliban would return and oppress them again. I listened respectfully, allowing him to express his fears and concerns. After a five-minute ride down several streets that were really no more than alleys, we arrived at his home, removed our shoes, and were ushered into a long, narrow room where our dinner was to be served. The long, carpeted room had no furnishings other than art on the walls and a TV set at the one end. He brought in a local musician who played the dauyab, a 3-stringed instrument, and sang while we waited for Yonos to fetch the others. We waited for almost an hour before others arrived and were told we missed a very lively (and at times heated) discussion amongst those who had remained after the meeting. One of the more outspoken Afghans, Liah Ghazanfar Jawed, Director of the Solidarity for Justice Foundation asked if the conversation could continue so we walked over to her offices the next afternoon. 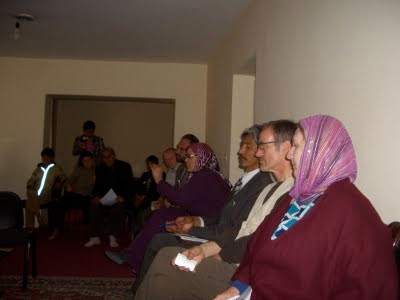 One of the critical concerns raised by the transitional justice coalition surrounds what they feel is a culture impunity throughout the entire country with little to no acknowledgment of the victims’ suffering or of past crimes. Karzai signed an Amnesty Law (for acts committed during the civil war) in secret and the lack of transparency greatly troubles this group. They claim many of the warlords that populate his cabinet should be prosecuted for war crimes. Accountability, not amnesia, for past and present crimes is a prerequisite for genuine reconciliation and peace in Afghanistan, they said. Some in the group appeared to be open to a Truth and Reconciliation process similar to that in South Africa but only if specific crimes are acknowledged as part of the process. There can be no peace without justice. “We don’t want a peace with these (known) criminals walking around”, especially those given powerful positions in the government.

However, the most contentious issue seems to be how, politically, can this process of accountability, reparations, and healing happen with the constant threat and fear of the Taliban regaining control? For many of these middle class Afghans (who, in all likelihood also benefit, at least indirectly, from the billions of US dollars flowing into Afghanistan for both the prosecution of the war and for the supposed re-building under the counter-insurgency strategy), there is grave concern of (another) rapid US pull-out reminiscent of what happened in early 2003 when Afghanistan was dumped for the new center of the war, Iraq. So they voiced a strong support for US troops to remain. [How long and under what conditions was more vague.] The AYPV boys, on the other hand stated clearly they wanted all foreign troops out as quickly as could be done “responsibly”.

Both the US and Australian peace delegates responded with a warning: beware of the fox guarding the hen house. The Afghans, desperate to have a strong counter-force to a possible resurgent Taliban had ascribed all sorts of honorable intentions to the US intervention – women’s rights, democracy, human rights, … The Americans countered that perception by citing US interests in securing a pipeline through Afghanistan for oil and natural gas, regional hegemony (especially to counter threats from Iran), empire-building, and political payback for US weapons manufacturers as less noble reasons. Donna observed that when an Australian soldier is killed in Afghanistan, it is front-page news back home. But, she continued, we hear nothing in our media about Afghan victims. The justice I seek, she said, is to value all the victims. US delegates expressed their pessimism that the US military might never leave.

Hakim pointed out what he thought was the foundational question that must be addressed in this discussion: Is peace and justice brought about with and through military means? Peggy noted that recent studies have reported that when the US increases the number of troops, the number of Taliban also seems to increase which indicates the strategy doesn’t work. A number of analysts have observed that whenever civilians were killed by US or ISAF military action, particularly by Hellfire missiles fired by pilot-less drone aircraft from miles above the intended target, an exponentially larger number joins the resistance or insurgency. 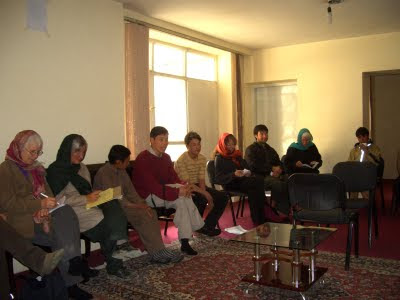 Kathy Kelly was asked by Hakim to respond to the concerns raised. She said, “We do have a great deal of cynicism but we’d like it to be tempered with love – but we know that the people who have been in charge in our country have been ruthless and they have tolerated tremendous bloodshed and starvation and terrible destruction of our environment in war after war after war.

And … we have to have tender hearts but tough minds; when the United States is trying to assure that all its soldiers here get fed – and they are fed – some of them complain that they are too fat now, it means many, many trucks of supplies have to go … and we know that the US has to pay for passage to get these trucks through and this money goes to the pockets of these same warlords that we say we are fighting against. And we know that it is costing $1 million per year for one soldier, $2 BILLION every week – who is getting that money, where is it going? It’s not going to the right hands. Its not going to help assure that the structures you are working hard to preserve will be supported.

Because I was in Iraq 27 times, and I’ve been with mothers, holding their babies, starving – none of those mothers went home with their babies – none of them. 500,000 children. And the United States government does not care. We fasted for 30 days under George Bush every summer; we tried every trick in the book, and they devastated Iraq, they broke it. We have a history of genocide and we don’t want it inflicted on other people. We want to tell the truth – to ourselves. And then we want to ask you to forgive us and hope we can go forward in friendship.”

By the end of our two-hour conversation, we realized we weren’t that far apart. Our Afghan friends wanted to hear their pain about the victims that are too quickly forgotten and their real fears about another civil war occurring if the US pulls out too quickly; the peace delegates wanted to be sure the Afghans didn’t mistakenly ascribe too noble intentions to the military intervention by the US and other international forces. The AYPV young people want the spiral of violence to end. All of us sensed the pain and destructiveness of war and the evils of unchecked and unaccountable power. We had come to Afghanistan to listen and learn. There are no easy answers once the dogs of war have been unleashed.