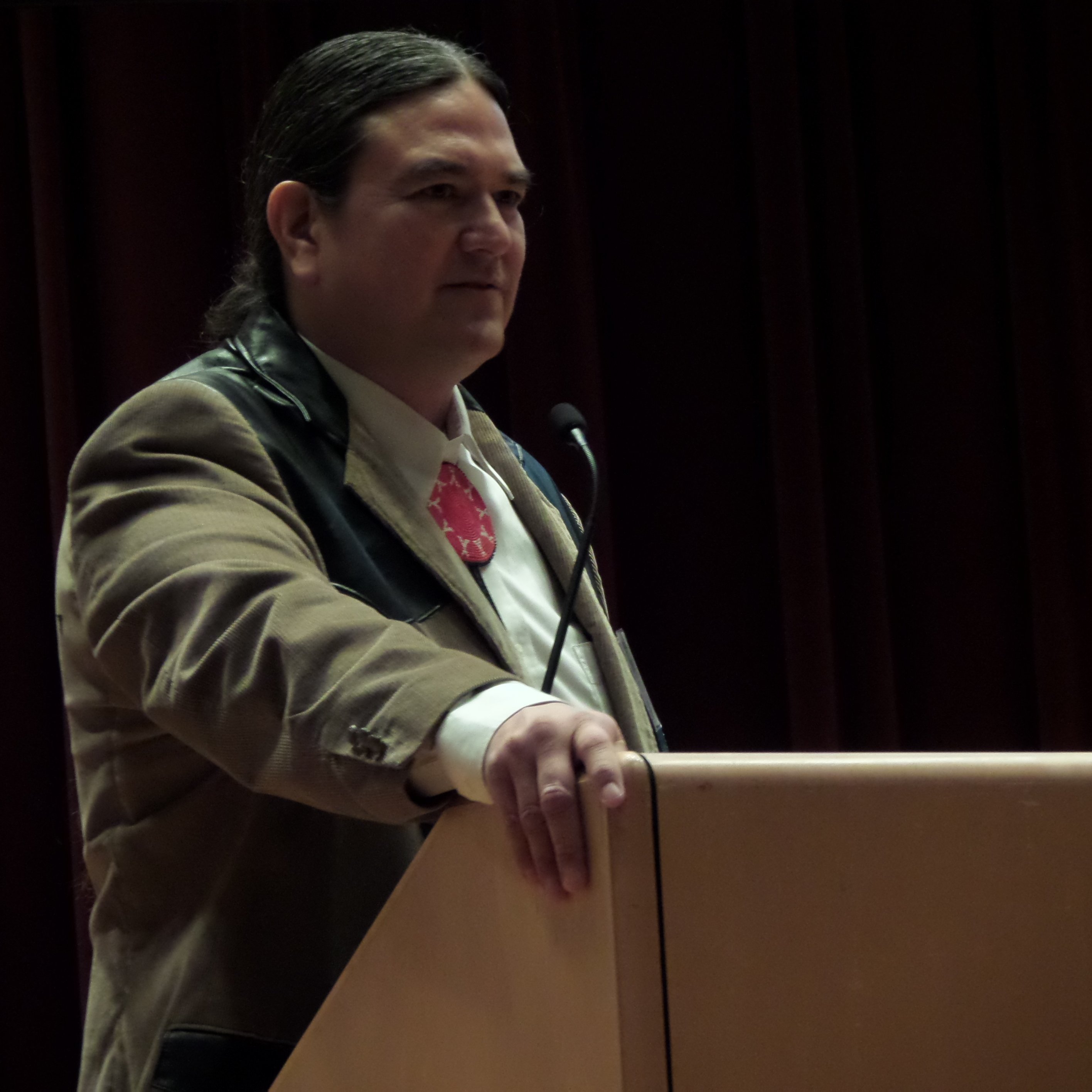 Personal takeaway: The theme of this years Forum, “Crossing Boundaries to Create Common Ground” holds consistently, and while I was exhausted at the end of the day, and the topics I heard were very serious, I went home feeling hope for the future. The grassroots (all of us) matter.

Todays two keynotes by Dr. Deane Marchbein U.S. President of Doctors Without Borders (Medicins sans Frontiers) and Dr. William Foege, best known for his major contribution to eradication of Smallpox, were superb. They were transmitted world wide live to an international audience, and appear in the video section referred to above. Both talks – indeed all the talks – are very well worth the 1 1/2 hours each. Also, check out Dr. Foege’s book on the eradication of Smallpox: “House on Fire: A Fight to Eradicate Smallpox”.

UPDATE: All live stream talks at this years Forum “by Nobel Peace Prize Forum” are archived and immediately accessible in their entirety via google plus on YouTube here. By my count there are 13 talks on video thus far, and there will be at least two more today (Sunday March 9). 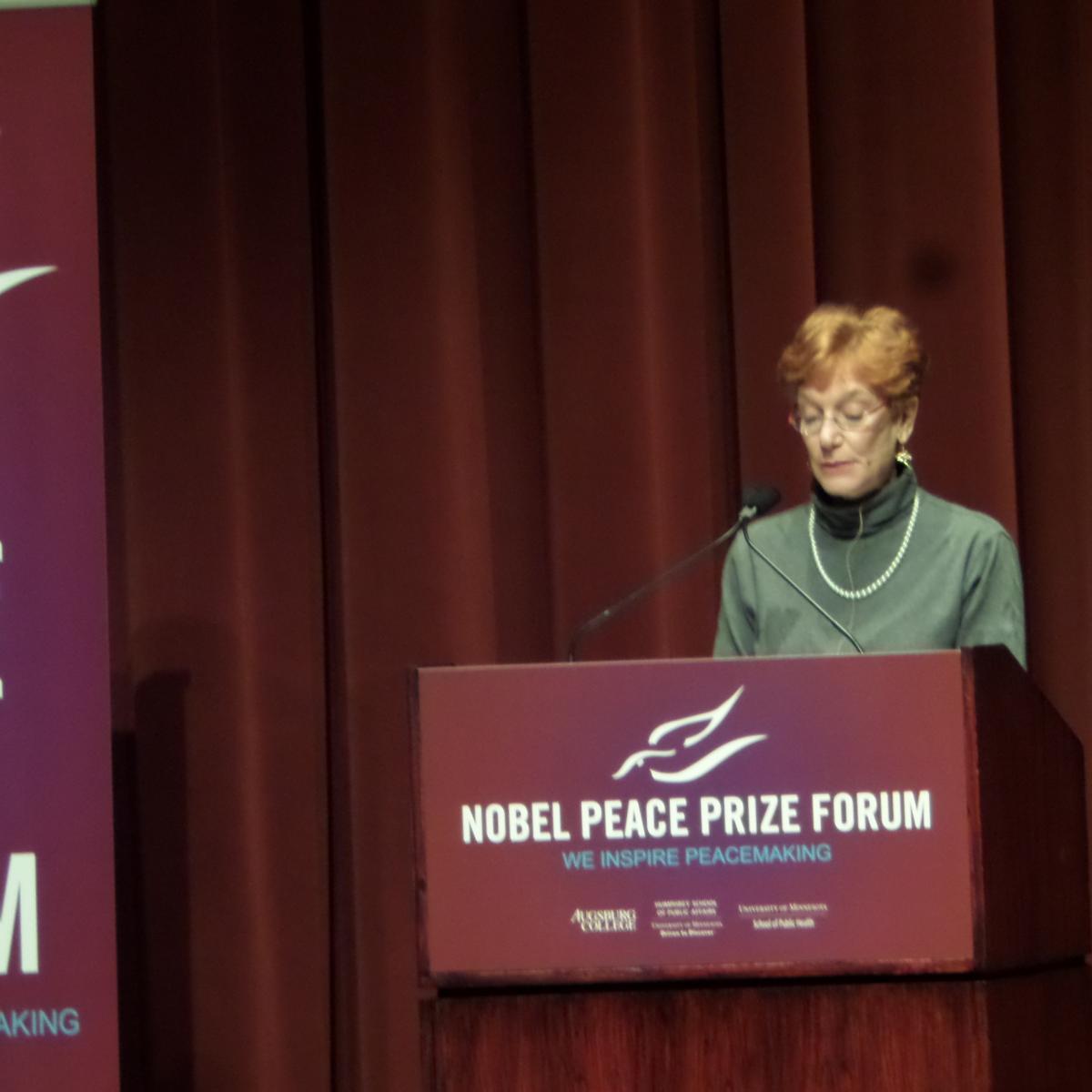 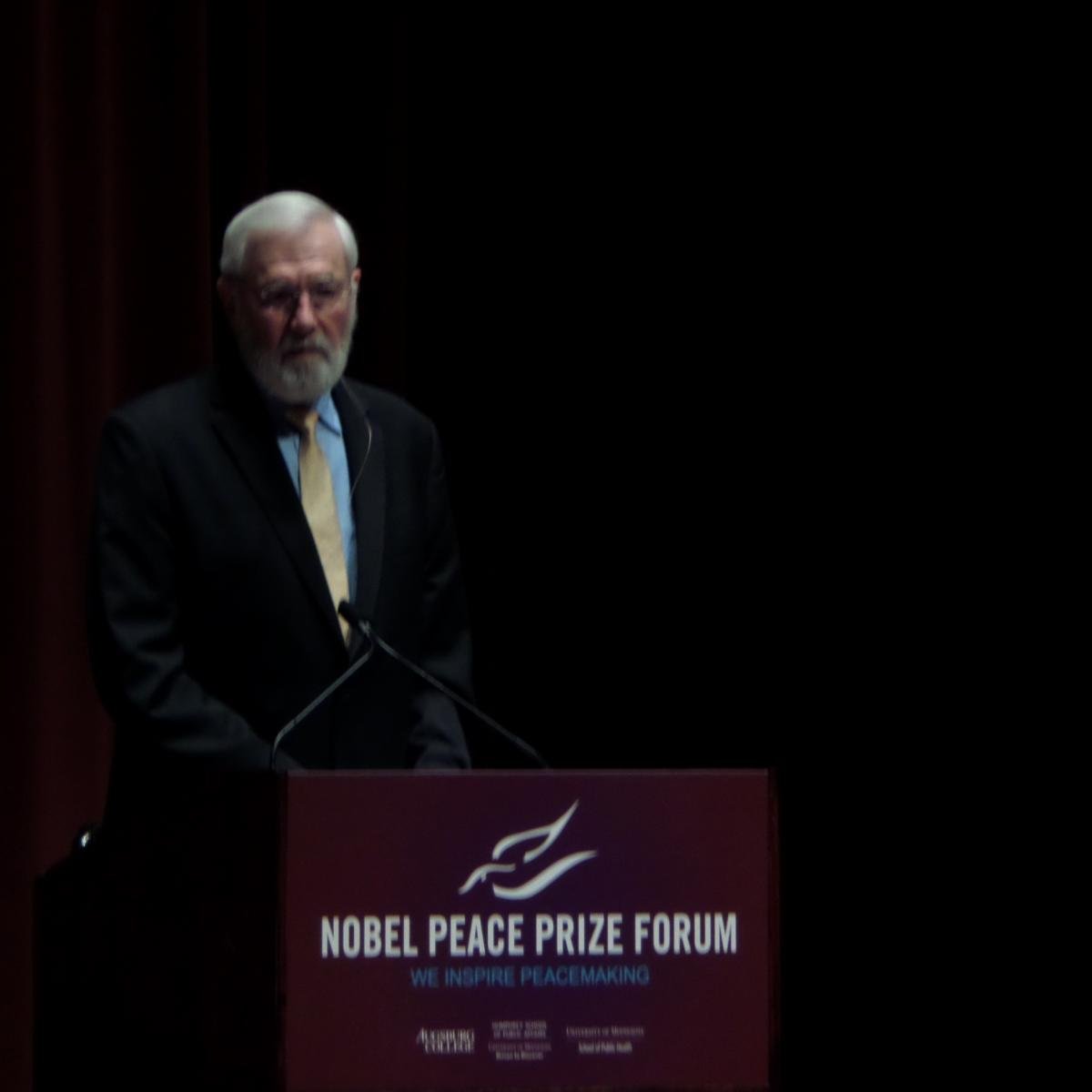 In between, I had to choose between an assortment of workshops, one in the morning and the other in the afternoon, both 1 1/2 hours.

I’m not sure what the other workshops would have offered. Whatever the case, I made two great choices.

“Crowdsourcing to Create Common Ground” sounded interesting (live-streamed and archived here), and indeed it was, featuring four young academics, two with us, the others live-streamed from England, and from Denmark, talking about bridging the gap between past and future methods of finding common ground on questions of all kinds. Speaking as an older person in the midst of college age kids, I found the presentation very well done, and left with a great deal to think about. There are plenty of on-line links relating to the concept Crowdsourcing.

Here are a couple of photos: 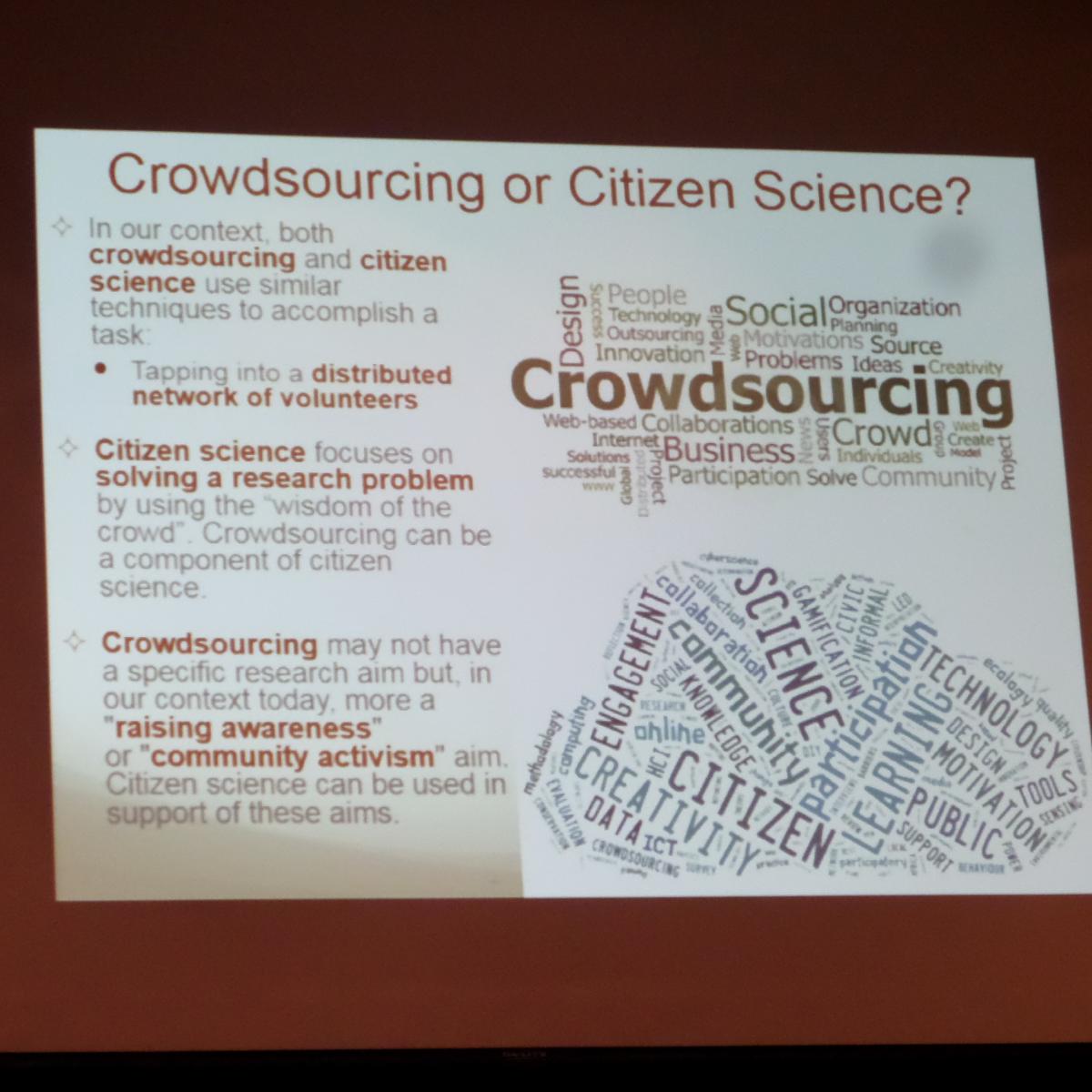 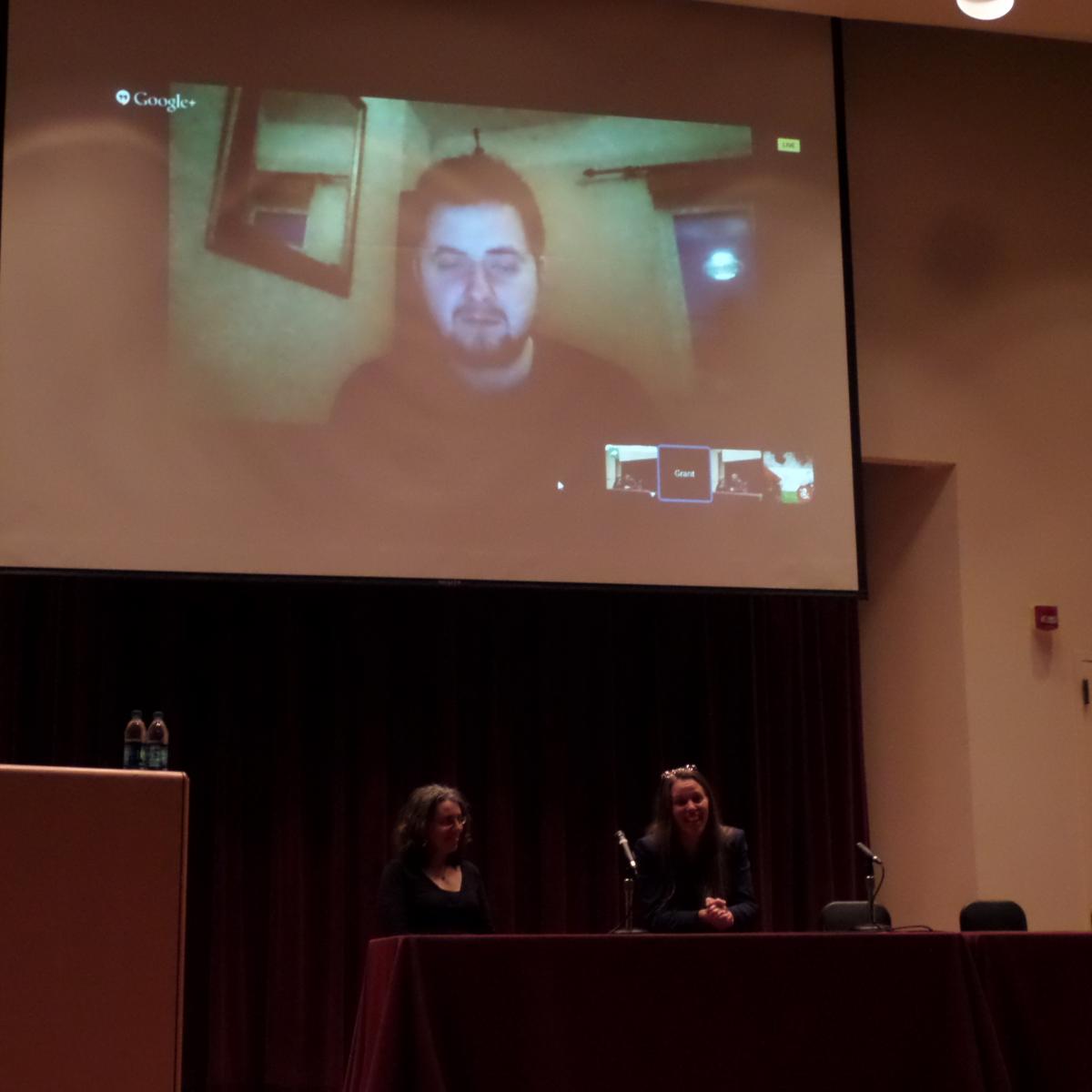 Live on-line from Oxford, England. Once the connection was made, communication was clear and conversation seemed easy.

Many thanks to Dr. Lucy Fortson of UofMN School of Physics and Astronomy; Caren Cooper, Cornell Lab of Ornithology (both on-site), Finn Danielson of Monitoring Matters Network; and Nordic foundation for Development and Ecology, linked in from Denmark; and a representative from zooniverse (in the photo) speaking from England.

In the afternoon, I attended a powerful (and very troubling) session entitled “Crossing Boundaries to Create American Indian Health Equity”. Speaker was Dr. Donald K. Warne Professor of Public Health Program a the North Dakota State University. Dr. Warne is Oglala Lakota who grew up in Kyle SD on the Pineridge Indian Reservation. The first two sentences of the seminar descriptor describes his session well: “We don’t have to travel to the 3rd world to find 3rd world health status. Health indicators of American Indians are shamefully low.” As part of life’s passage, many of us go to poor foreign countries to do good, which is great. In our backyard, at home in our own country, are many trapped in poverty.

Dr. Warne made his points gently, but firmly. His presentation was very clear and troubling, and the audience, largely students, was very attentive. I wish everyone could hear his talk.

I gathered Dr. Warne would be glad to have contacts from people with an interest in the topic: donaldDOTwarneATndsu.edu.